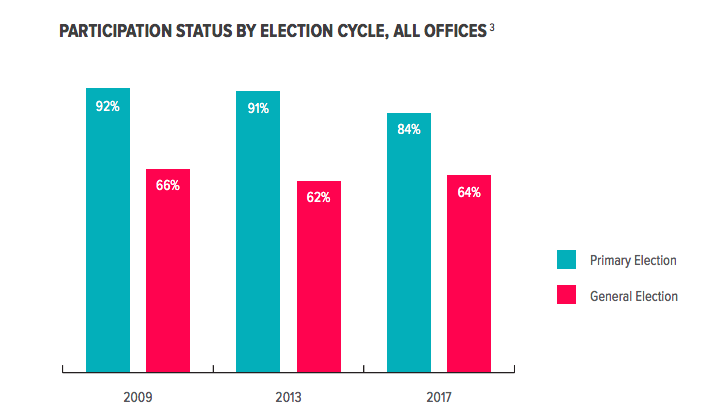 As a mayoral charter revision commission readies to release proposals that would, if approved by voters in November, reduce the impact of large donors in municipal elections, a report released Thursday by the New York City Campaign Finance Board highlights how small donors are increasingly playing a larger role in city elections.

The CFB’s 2017 post-election report examined last year’s citywide election, in which the three citywide positions, five borough presidents, and all 51 City Council seats were on the ballot. The CFB administers the city’s campaign finance law and its public matching funds program, which currently matches the first $175 of every qualifying donation at a 6-to-1 ratio, incentivizing candidates, especially those who lack deep pockets or access to moneyed donors, to run for election on grassroots campaigning and fundraising. The program is considered a national model and has been emulated in municipal elections in other states.

In 2017, the eighth citywide election under the program, small donors played a bigger role than they ever have before, the report found. About 73 percent of contributors to mayoral candidates were small donors, giving $175 or less. That number was 43 percent in the 2013 election cycle and 70 percent in 2009.

Mayor Bill de Blasio and his Republican general election opponent, state Assembly member Nicole Malliotakis, both participated in the public funds program last year. De Blasio made a concerted effort to court small donors for his reelection after having faced allegations -- which also prompted official investigations that closed with no charges filed -- that his administration took favorable actions for donors with city business who gave large contributions to his campaign and two extra-governmental nonprofits he created to promote his agenda.

In total, the CFB doled out $17.7 million in public funds, $5.9 million of which went to de Blasio and Malliotakis. The report also found that City Council candidates got more than 50 percent of their funds from the public matching program.

“For 30 years, New York City’s Campaign Finance Program has shaped the landscape of city elections and strengthened New Yorkers’ relationship to their government," said Amy Loprest, CFB executive director, in a statement. “Our 2017 Post-Election Report highlights why our program continues to be a model for citizens across the country who want to reduce the impact of big money in politics.”

The report also includes several proposals to improve the campaign finance program through legislation. The board recommends lowering contribution limits, increasing the matching fund ratio and the cap on public funds, lowering both the threshold for citywide candidates to qualify for public funds and the lowest matchable contribution.

The CFB issued these same recommendations to the mayor’s charter revision commission in June, and the commission has taken some of them into consideration as it creates its final proposals, which will be released in the coming weeks and put before voters on Election Day in November. Among other suggestions, the commission will recommend lowering contribution limits for citywide candidates to $2,000 for those who participate in the public funds program and $3,500 for those who do not. The current limit is $5,100. The commission is also proposing increasing the ratio of matching funds to 8-to-1 and matching the first $250 of every contribution for citywide candidates. Under another proposal, the public funds cap would increase from 55 percent of the spending limit for a position to 75 percent.

The charter commission is set to meet on Tuesday to vote on the final language of questions that will be placed on the ballot for voters. Should any of the CFB’s recommendations fail to make the grade, they will likely be taken up by the City Council in the form of legislation or by a separate Council-convened charter commission that will start to hold public hearings in mid-September and is planning to put recommendations before voters in 2019.