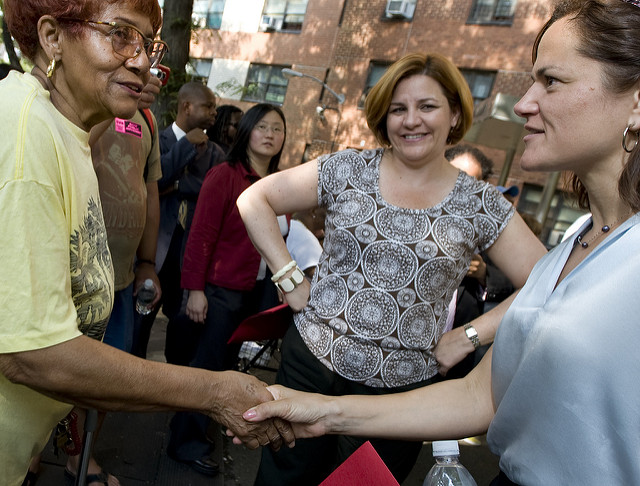 The September primary election is just over one week away and if New York City Public Advocate Letitia James wins the Democratic nomination for attorney general over her three primary opponents, she will be a significant favorite to win the position in November owing in large part to the state’s Democrat-heavy electorate. No Republican has won statewide since Governor George Pataki captured a third term in 2002; it’s been far longer for a Republican attorney general.

James winning the nomination will likely kick-off, in earnest, a mad scramble by several sitting and former elected officials who may seek to replace her through the at-that-point nearly certain special election for her citywide seat. Among the stronger potential contenders discussed in Democratic circles are two former speakers of the New York City Council -- Melissa Mark-Viverito, who led the body until last year, and Christine Quinn, her predecessor.

While they come from different wings of the New York Democratic Party, both Mark-Viverito and Quinn are firebrand politicians in their own right, and both made history in their respective ascensions to the speakership.

Quinn, a Democrat who represented parts of the lower west side of Manhattan, became the first openly gay and first female speaker in 2006, presiding over the 51-member legislative body for two four-year terms. For the last three years, since being term-limited out of office and losing in the 2013 mayoral primary, she has served as president and CEO of Women in Need (WIN), a nonprofit that provides services to homeless women and children. Some Democrats and others have criticized Quinn for her close working relationship with Mayor Michael Bloomberg, including the effort to extend term limits, which allowed Bloomberg, Quinn, and others to seek a third term in 2009 despite public disapproval. She is currently a close ally of Governor Andrew Cuomo, who appointed her vice chair of the New York State Democratic Committee.

Mark-Viverito, a Puerto Rican native who represented a district that includes East Harlem and part of the south Bronx, became the Council’s first Latina speaker in 2014, pushing a broad agenda of criminal justice reform, immigrant protection, police accountability and affordable housing. In January, she became a senior adviser at the Latino Victory Fund PAC, a group that supports Latino candidates for elected office. As speaker, Mark-Viverito was at times criticized for her close relationship with Mayor Bill de Blasio, a fellow progressive Democrat, and she has been an outspoken critic of the governor, endorsing his primary opponent, Cynthia Nixon. Mark-Viverito is one of a relatively small group of prominent Democrats that is backing Nixon for governor and James for attorney general.

After a New York Law School panel earlier this month, Quinn did not deny having an eye on the office of public advocate. “We have to get Tish James elected and that’s what I’m focused on and also let’s not forget the Lieutenant Governor, Kathy Hochul, we have to get reelected,” she told Gotham Gazette, when asked if she had considered running for public advocate in the event of James’ ascension to attorney general. “Right now, I am focused, most importantly, on running WIN and helping the homeless families that we serve...and then in my spare time, so to speak, among other things, I’m helping candidates and friends run for office. So that’s what this summer and fall is about.”

Pressed further, she simply repeated the statement. “That’s what this summer and fall is about.”

Mark-Viverito is slightly less circumspect about her own political future. “I’ve been consistent in saying that I’m really proud of the record that I have accomplished and the issues that I’ve championed and what we’ve been able to get done in the city of New York,” she told Gotham Gazette in a recent phone interview. “I’m not gonna close the door on looking at possibilities in the future if other positions or other opportunities became available...So if there is an opportunity that presents itself, I will definitely be taking a look at that. And I feel strongly that Tish will win so we’ll have that conversation later.”

She emphasized that she brings a strong perspective to policy-making as a Latina representing a low-income community. “I think that’s something that we consistently need to have in positions of authority in the city,” Mark-Viverito said. “And I believe my record speaks for itself and I look forward to being able to continue to serve this wonderful city.”

The special election, if there is one, would take place in March, assuming James is sworn in January 1 and vacates her current seat. Special elections for public advocate are nonpartisan, and each candidate would have to run on their own unique political party ballot line. The winner would then have to run for the seat again in a primary and general election later in 2019, if that person wants to keep the position.

There are several others who have either been floated as candidates or have signalled an interest in becoming the city’s ombudsperson, a post also considered a strong launching pad for a mayoral bid as de Blasio illustrated. They include sitting City Council Members Rafael Espinal, Ydanis Rodriguez, Ritchie Torres, and Joe Borelli, the only Republican among them. All of them but Borelli will be term-limited out of office in 2021. State Assemblymember Michael Blake is another potential candidate, as are Republican attorney J.C. Polanco and Columbia professor David Eisenbach, who both challenged James when she was up for reelection last year -- Eisenbach in the primary and Polanco in the general. Eisenbach has already officially filed papers with the New York City Campaign Finance Board.

“I think the position obviously has a lot of potential,” said a Democratic consultant who spoke on the condition of anonymity. “It has different potential than being the City Council speaker where you’re not just responsible for yourself, you’re responsible for 50 other members, hundreds of staff, dozens of appointments here or there. It’s a different set of responsibilities and in the hands of someone who understands the levers of government, who understands the bully pulpit and is sort of willing to take bold steps, it can be a very strong position.”

The public advocate can act as more than just a “counterweight to the mayor,” the consultant said. “That person also can establish themselves as someone who is also driving the agenda for New York, and that’s something we haven’t really seen since Mark Green,” the person added, referring to the city’s first-ever public advocate, who served from 1994 to 2001.

Espinal, a Brooklyn representative, said in an email, “I’m seriously considering it, and whether to launch a campaign will come down to the positive energy and support from New Yorkers.”

A spokesperson for Rodriguez, whose district covers neighborhoods in upper Manhattan and a small section of the Bronx, said, “[Council Member Rodriguez] is committed to supporting Public Advocate James in her run for attorney general as she is the most qualified in the race. Should there be a special election for public advocate, he would consider running for that seat.”

Torres, in a statement through a spokesperson, said, “I am still thinking about it and where I would be most effective. I’m debating which position would allow me to be a better advocate for the city.” The Bronx Council member is also said to be looking at a run for Congress or Bronx borough president.

Borelli also said he was considering a run for public advocate, though he conceded that it would be tough to retain. “It’s possible to win a special, but it will be difficult for a Republican to win the following November,” he said in a text message.

When asked about Quinn and Mark-Viverito both running, he said, “Each would be formidable.”

Shortly before a primary debate among the four Democratic attorney general candidates on Tuesday, Assembly Member Blake told Gotham Gazette he was watching closely in case James’ seat becomes vacant. “She’s gotta win first, but it would be irresponsible not to be looking at it,” he said about considering a run. “First and foremost, this is brand new terrain for all of us. The possibility for a citywide special election is unique to say the least...Out of respect for everybody in the field, this is a moot point unless [James] is the attorney general, and we’re gonna be respectful of that.”

He added, “As I tell my team often, proper preparation prevents poor performance. So you’re just ready, and if that opportunity presents itself, we have some serious decisions to make.”

Blake, who is a vice chair of the Democratic National Committee, was the campaign manager for 2013 public advocate candidate Reshma Saujani, giving him some recent experience with a citywide race. He was then elected to the Assembly in 2014.

No current elected official would have to give up their seat to run in the special election, but, if victorious, would then have to vacate their position to become public advocate.

As Borelli alluded to, one effect of numerous Democrats entering the fray is that they could split the vote in what will likely be a low-turnout special election, offering up an opportunity for a Republican to claim victory.

Polanco, the attorney and former public advocate candidate, recognizes that opening. Having run for the seat just last year, he has certain advantages. “Whoever is gonna come from our side, there has to be just one candidate,” Polanco said in a phone interview. “We’re small enough as it is. Even in a non-partisan race, you’re gonna need organizational support. So the organizations have to line up behind one candidate from the beginning in order for us to have a shot.”

Polanco noted that the nonpartisan aspect of the election is “always good for democracy, always good for participation,” since voters won’t necessarily make choices along party lines. But he also echoed the risk for any sitting Republican elected official who might run, as Borelli noted. “Do you give up your Council seat for that? I don’t know whether that’s a good gamble or not, especially if you have three years left on your Council seat,” Polanco said.

Polanco also weighed in on the potential contest between two former Council speakers, saying Quinn would be the “ultimate” candidate. “She’s the most qualified of the candidates on that side running,” he said. “But I think the Democratic Party of today is more along the lines of Melissa Mark-Viverito. The Ocasio-Cortezes of the world, the democratic socialists, are getting momentum. She represents that faction. We can’t kid ourselves.”