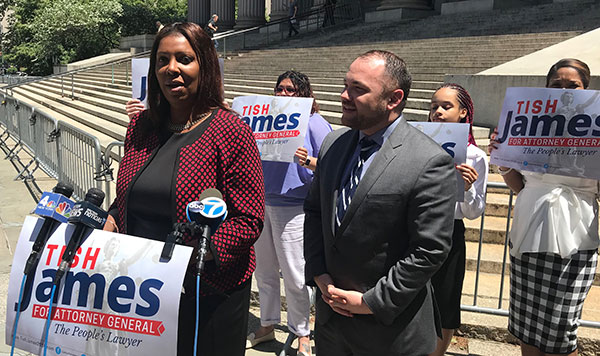 Two former speakers of the New York City Council -- Melissa Mark-Viverito and Christine Quinn -- are on the list of possible contenders for a potential vacancy in the office of public advocate should the current occupant, Letitia James, win the post of attorney general in this fall’s elections. But it’s the sitting Council speaker, Corey Johnson, who will get to do the job first if that scenario came to pass.

James is competing against three other Democrats to win the party’s primary nomination for attorney general on September 13. She has been the presumed frontrunner for months, with the blessing of Governor Andrew Cuomo and the state Democratic Party, though one of her opponents, Fordham Law professor Zephyr Teachout, has picked up strong momentum and several prominent endorsement in recent weeks.

If James prevails in the primary then the general, assuming she is sworn in an attorney general at the start of 2019, it would trigger a nonpartisan special election to be held roughly 51 days later. And for those seven weeks or so, the City Council speaker would assume her duties.

It would be the first time since the creation of the office of public advocate and the current office of the speaker, through a charter revision in 1989, that the clause would go into effect. It’s unclear how the speaker would approach the dual role, even in the interim, as he would both lead his 51-member legislative body and large central staff, and, as the title suggests, an office that advocates for the interests of everyday New Yorkers and keeps a watch on the functions and failures of city government. Both Johnson’s and James’ offices declined to comment for this article. Johnson has endorsed James for attorney general.

“If you get a vacancy, you want to get it filled by someone. Elections are gonna take a long time. A short time but a long time,” said Eric Lane, the Eric J. Schmertz Distinguished Professor of Public Law and Public Service at the Maurice A. Deane School of Law, Hofstra University. Lane served as executive director and counsel to the 1989 charter revision commission, which overhauled the structure of city government and created the positions that James and Johnson now hold.

“We definitely didn’t want the mayor to make that appointment,” Lane said, explaining the thinking behind the line of succession for public advocate. “In an intensely administrative government, where the mayor holds so much power, it’s the public advocate’s function to be a watchdog on that power.” The public advocate is also next in line to the mayoralty if a sitting mayor is removed from office or unable to carry out his or her duties.

The public advocate was formerly known as the City Council president, but the position’s powers were stripped by the 1989 commission through the creation of the City Council speaker. The commission then decided to retain and re-envision the public advocate’s office in its current form, Lane said. “It was, in some ways, the least significant, most controversial topic we considered in the 1989 commission,” he said, noting that there was hotly-contested debate over the necessity of another citywide office. The rationale behind it was two-fold, he insisted. To have another set of independent eyes on the city bureaucracy and to allow minority communities to have a more participatory role in city politics.

Given the public advocate’s connection with the City Council, it then made sense for the vacancy to fall to the speaker. “We could’ve appointed the comptroller,” Lane conceded, “but at the time, we thought it would be more consistent with what the Council does. The Council had a relationship with that office, historically.”