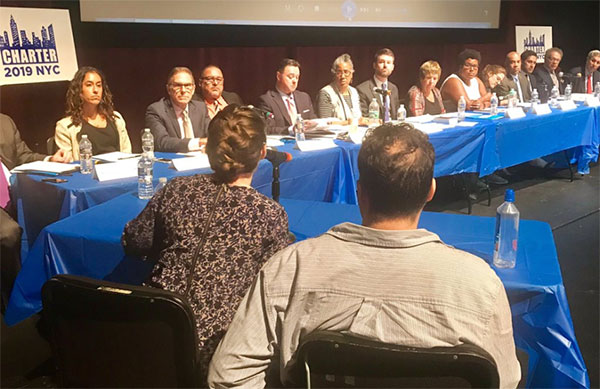 The first hearing of the 2019 charter commission (photo: @Charter2019NYC)

Mayor Bill de Blasio’s charter revision commission may be done with its work but a separate commission, empanelled through legislation passed by the City Council, is just getting started.

The City Council-created commission, conceived by Manhattan Borough President Gale Brewer and Public Advocate Letitia James, held its first hearing on Wednesday to get suggestions about improving the city’s charter, the document that outlines the central powers, structures, and functions of city government. The 15-member commission is composed of members appointed by the Council speaker, the mayor, the comptroller, public advocate, and the five borough presidents. It is working towards putting questions on the ballot for the November 2019 election (the mayor’s commission recently approved three questions for this year’s general election ballot).

The 2019 commission, as it is being called, has a much broader mandate than de Blasio set for his, though by law charter revision commissions, once established, are able to examine whatever parts of the charter they see fit. The mayoral commission stayed fairly close to de Blasio’s directive, putting forth proposals regarding campaign finance reform, civic engagement, and community board reform. The 2019 commission has been expected to consider major changes related to land use and budgeting processes, and beyond.

While the commission will do its own internal deliberations and staff research, it is embarking on a public process to hear from New Yorkers, including issue-area experts and advocates, and everyday people.

Wednesday’s hearing, held at Lehman College in the Bronx, saw more than a dozen New Yorkers present a myriad of ideas over the course of three hours. The proposals broached everything from housing affordability protections and community board structure to government transparency measures and oversight agencies. Among the prominent ideas repeatedly suggested at the hearing were a broad push for police accountability and sweeping changes to the city’s land use policies, which many expected since the commission is being chaired by Gail Benjamin, the former land use division head for the City Council who was appointed by current Speaker Corey Johnson to head the commission.

In testimony, Hannah Birnbaum, who handles community engagement for 32BJ SEIU, the prominent labor union, stressed a “need for a more equitable and more democratic approach to land use decisions.” Among her recommendations were prevailing wage requirements for building service workers when the city disposes of public property, imposing the city’s Uniform Land Use Review Procedure (ULURP) for new construction on land owned by the New York City Housing Authority (NYCHA), and a central public database of land use applications.

A prominent voice for land use reform was Manhattan and Bronx City Council Member Diana Ayala, who testified at the hearing as co-chair of the City Council’s 22-member Progressive Caucus. “It is no secret that the city’s land use and planning processes are deeply flawed,” she said, emphasizing that the city’s approach is largely “reactive” and “randomly” addresses crucial issues of homelessness, environmental justice, rampant private development, and necessary infrastructure. “The status quo of ad hoc planning is just not working…We need a larger vision based on equity, a vision in which low-income communities do not have to slowly bear the brunt of the city’s every housing and infrastructure need.”

Ayala said the caucus’ proposals were based on five guiding principles -- equity and fairness, proactive and responsive plans, inclusive engagement, resiliency and sustainability, and transparency and accountability. She pushed for a “comprehensive planning framework that includes a fair share analysis,” an independent City Planning Commission, and empowering communities to have a voice before, during, and after a land use application process.

Commissioner Carl Weisbrod, the former city planning chief, pointed out that there are existing fair share principles for siting municipal facilities. “How would you suggest they be changed to make them more effective?” Weisbrod asked.

“I would eradicate them because they don’t work,” Ayala said bluntly.

Early on, Jed Holtz, an organizer for the Freedom Socialist Party, recommended allowing noncitizens to vote in municipal elections and also pushed the commission to address the “complete lack of accountability of the NYPD.” Holtz was one of several people who testified to that point, advocating for an entirely new structure of oversight of the police.

The central idea several advocates pushed was the creation of a publicly-elected Civilian Complaint Review Board, which hears and investigates complaints about NYPD officers -- CCRB members are currently appointed by the mayor, City Council, and police commissioner -- and establishing an elected special prosecutor dedicated to NYPD officer discipline. Current disciplinary procedures, they noted, allow the NYPD commissioner to have the final word on disciplinary recommendations made by the CCRB, and commissioners past and present have more often than not diluted and ignored those recommendations.

Though the advocates insisted that state law does not prohibit the creation of such an elected CCRB and prosecutor, they did struggle to answer probing questions from the commissioners about how the city could set those up without inviting legal challenges. “We’ve done a thorough review of all state law and we can’t find anything in the state law that says that this couldn’t happen,” one advocate said, when Commissioner Sal Albanese questioned whether it would be compatible with the state’s civil service law.

Hawk Newsome, president of Black Lives Matter of Greater New York, emphasized the urgency of those proposals. “What we have here is the opportunity for New York to be a trailblazer on an issue that has plagued our society since the inception of policing in black and brown communities,” he said, as he went on to cite the names of several New Yorkers killed at the hands of police. “You have the opportunity to right wrongs.”

An appointed CCRB, he said, could never be free of political considerations even if its independent on paper. “This is implicit bias. You know who signs your checks, you know who appoints you, and this is who you’re loyal to,” he said.

There were of course several other proposals, some serious, others parochial and impractical.

Alex Camarda, senior policy advisor for Reinvent Albany, a government reform group, suggested an overhaul of Chapter 47 of the city charter, which covers public access to meetings and information. Carl Lanzano, a member of Community Board 12, floated the idea of a Community Board Council made up of members elected from each of the city’s 59 community boards, which would then elect five members -- one from each borough -- to sit on the City Council and introduce and vote on legislation. Dmitri Daniel Glinski, president of the Russian-speaking Community Council of Manhattan & the Bronx, suggested scrapping the Mayor’s Office of Immigrant Affairs and creating a new commission proportionally composed of members of the city’s immigrant communities. Another individual lambasted the Department of Investigation and said its head should be elected, not chosen by the mayor.

The commission will continue its initial round of evening public hearings in each borough with events in Brooklyn on Monday and Queens on Thursday, with Staten Island and Brooklyn the following week.

Note- This article has been updated to note that Dmitri Daniel Glinski, president of the Russian-speaking Community Council of Manhattan & the Bronx, testified at the hearing. Glinski was not named in an earlier version of this article.