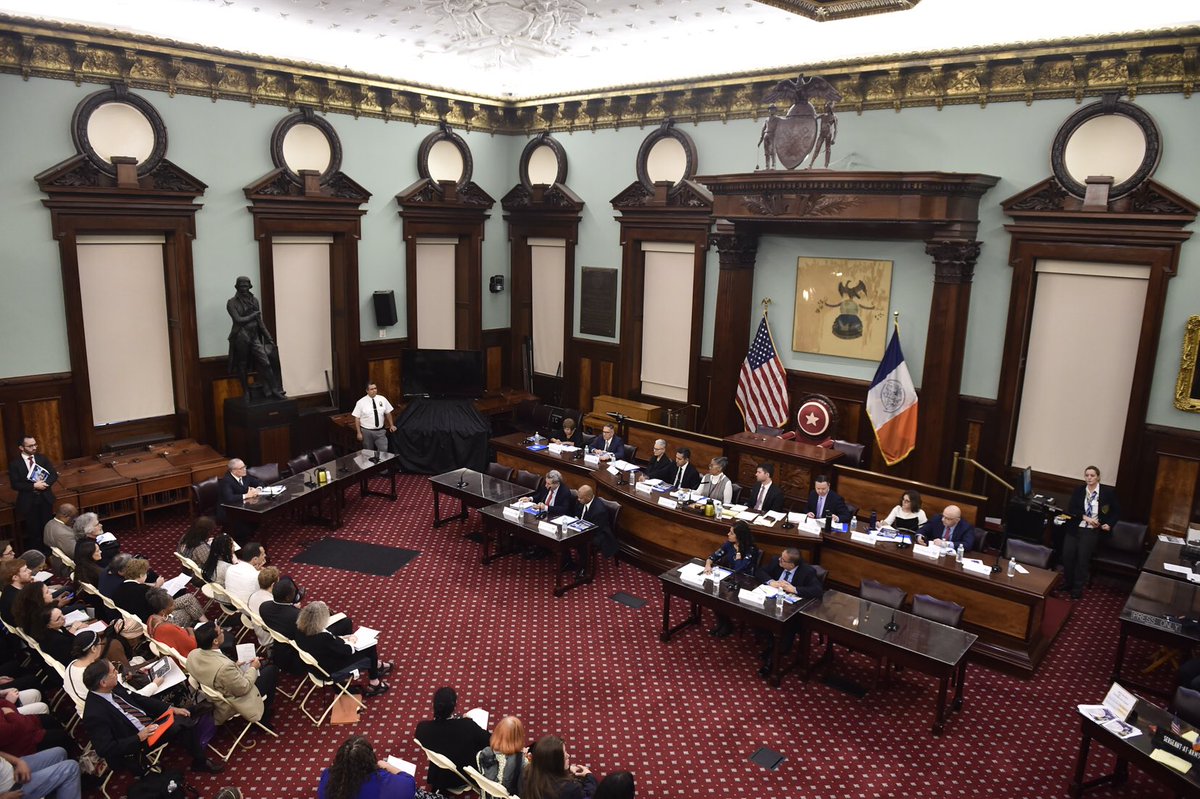 The charter revision commission created through New York City Council legislation concluded its first round of public hearings last month, receiving dozens of suggestions about improving the functions and structure of city government. Unlike the commission established by Mayor Bill de Blasio, which has three proposals on this November’s ballot, the Council-created commission is set to propose changes to the city’s central governing document via the 2019 election.

Among those who testified at the 2019 commission’s initial hearings were several elected officials who presented their own broad proposals that could significantly change how the city conducts its business and how those who hold power can wield it. They included City Council Speaker Corey Johnson, Comptroller Scott Stringer, Manhattan Borough President Gale Brewer, Staten Island Borough President James Oddo, and several City Council members from the five boroughs.

Johnson -- who appointed the commission’s chair Gail Benjamin, the former head of the Council’s land use division, and three other members -- sees in the commission an opportunity to fix the balance of power in the city, which tilts toward the mayoralty and at times can diminish the oversight and accountability role played by the 51-member Council.

In testimony at the September 27 hearing held at City Hall, Johnson noted the Council’s limited ability to review mayoral appointees to head city agencies, and that the body cannot remove an agency head. He also suggested that the commission examine whether the budgets for certain offices “which are uncertain and subject to political considerations as opposed to substantive need, should be fixed or independently set.”

Johnson also recommended the commission look at the structure of the Law Department and the Corporation Counsel. “One lawyer attempting to serve two separate branches of government is an invitation for confusion and disruption and may not be in the best interests of the City,” his testimony reads, in reference to representation of both the executive and legislative branches of city government, an issue that has come to the fore as Council members have sought to join a lawsuit against the city’s property tax system.

Johnson is also pushing for changes to the city’s budget process to give the Council a greater voice and to tie budget allocations more closely to city programs, and also argued in favor of instant runoff voting, also known as ranked choice voting.

The most sweeping reforms that Johnson proposed, however, deal with the city’s land use process, which is almost always contentious and has been recently as Mayor Bill de Blasio’s administration has moved to rezone several neighborhoods -- mostly low-income, communities of color -- to increase density and create more affordable housing. Johnson and other members of the Council’s Progressive Caucus have advocated for a citywide planning framework that gives communities greater say in land use decisions and balances equity with development. They have also called for an independent City Planning Commission, as opposed to the one currently composed largely of mayoral appointees. Council Members Diana Ayala, who co-chairs the caucus, Keith Powers, a vice co-chair, Brad Lander, and Adrienne Adams each testified on those proposals at separate borough hearings. “The status quo of ad hoc planning is just not working…We need a larger vision based on equity, a vision in which low-income communities do not have to slowly bear the brunt of the city’s every housing and infrastructure need,” Ayala said at a September 12 hearing in the Bronx.

Those goals are also in line with a report released in January by the Regional Planning Association, a prominent think tank, in partnership with community advocacy groups, academic experts and partners in city government. The RPA report, titled “Inclusive City”, was also presented to the charter commission and cited by elected officials, including Brewer, who also testified at the Sept. 27 hearing. Brewer, along with Public Advocate Letitia James, was the driver behind the legislation that created the commission and has expressed hope that it can bring a sea change the likes of which hasn’t been seen since the 1989 charter commission fundamentally altered the structure of city government, giving it its present form.

In her testimony, Brewer emphasized a more thoughtful process for land use decisions that includes early input from community boards and elected officials before applications are certified through the Uniform Land Use Review Procedure (ULURP). “With pre-planning we can do more than merely react—we can shape a project,” she said.

She also pushed for more technical improvements to zoning and permitting procedures, in the context of a long-term citywide approach. “There needs to be a citywide comprehensive plan every ten years,” she said. “This planning process could distribute new development equitably across the city, rather than concentrate rezonings in communities of color.”

Similar to Johnson’s testimony, Brewer advocated for increased transparency in the city budget. She also said the Civilian Complaint Review Board should be strengthened and its budget tied to the NYPD’s, to ensure that the watchdog agency has sufficient resources to deal with a growing police body. Additionally, she noted her opposition to term limits for community boards, which have been proposed in a ballot question by the mayor’s commission. Borough presidents appoint most community board members.

Comptroller Stringer’s ideas, in number at least, outpaced other elected officials. In an exhaustive report presented at the City Hall hearing, Stringer recommended 65 revisions to the charter ranging from proposals on city budgeting and procurement to housing, cybersecurity, children’s services, campaign finance and voting reforms.

“Since the last major charter revision nearly thirty years ago, New York City has grown by 1.2 million people and the world has changed around it, yet its charter is not prepared to meet the needs of today’s challenges,” Stringer said in a statement. “The Charter Review Commission is an opportunity for us to build a better government that takes aim at our affordability crisis and builds a fairer city by giving a voice to New Yorkers.”

Chief among Stringer’s proposals was a push for a Chief Diversity Officer in the mayor’s office and in each city agency, to ensure diversity in hiring and in contracting. Stringer has advocated for increased investment in Minority- and Women-Owned Business Enterprises (M/WBEs) and he noted that though New York City spends nearly $20 billion on goods and services each year, less than 5 percent of the contracts are given to M/WBEs.

He also proposed a new Office of Inspection independent of the Department of Buildings and the Housing and Preservation Department, which he said play conflicting roles since they both approve new construction and development and are also charged with enforcing housing and construction codes. In line with his role as the city’s chief fiscal officer, Stringer also pushed for reforms to the capital budget, which funds infrastructure projects in the city. He said it should be transparent enough so the public can identify the cost of specific projects and be informed when those costs change.

Council Member Ben Kallos, also co-chair of the Progressive Caucus, proposed 72 ideas in total, in updated testimony, including a citizen “Bill of Rights to free higher education, affordable health and mental health care, and, access to parks, libraries, public transit and affordable internet.” He stressed that any revisions to the charter brought about through a ballot referendum should go through further changes only after being presented to voters again. He pushed to give the Council and borough presidents the ability to make appointments to mayoral boards that have land use authority and said the charter should be amended to allow city residents to propose legislation and be heard before the Council. “Our City’s Charter is truly a living document,” he said in a statement, “but it is up to us to make sure it remains alive.”

Council Member Helen Rosenthal pushed for the charter to formally adopt the United Nations Convention on the Elimination of All Forms of Discrimination Against
Women (CEDAW), and also advocated for reforms to the city's contracting process to ease burdensome requirements on non-profits that provide early childhood
education, homeless services, senior services, and mental healthcare.

At the September 20 hearing in Queens, Council Members Adams and Francisco Moya, who is not a Progressive Caucus member, supported improvements to ULURP. “Displacement in our neighborhoods is no longer a possibility but a fact of life,” Moya said, according to written testimony. He called for the charter to mandate assessments of displacement brought about by proposed development. “We cannot view our city and its neighborhoods in a vacuum,” Moya said.

There were, of course, elected officials with more borough-specific agendas. At the September 24 hearing on Staten Island, testimony by Borough President James Oddo, and Council Members Steven Matteo and Joseph Borelli (all three Republicans, unlike all of the other aforementioned officials, who are Democrats), advocated for greater freedom for the borough from “bureaucrats in Manhattan,” as Oddo and Matteo put it.

Oddo and Matteo, in submitted testimony, said that city agencies should be restructured to give borough commissioners more power over local issues. “Agencies should be restructured in such a way that the chain of command within the agency is clear, and that one individual on the local level is not only responsible and accountable, but specifically empowered within the agency to act,” they wrote.

Borelli similarly pushed for more decentralization of power, expressing concern that the priorities of Staten Islanders are often ignored by city government and that new changes to the charter could adversely affect the borough. “We don’t want to be laboratories for the latest experiments in social engineering as too often seems the case on issues ranging from buses to composting,” he said. He largely argued for giving the borough president greater jurisdiction over local issues, similar to a county executive outside New York City.

He also criticized the city’s public matching funds program for campaign financing, calling on the commission to negate the potential expansion of the program that could happen through a ballot proposal put forward by the mayor’s commission. And, he advanced several other proposals -- mandating that the Independent Budget Office study the fiscal impact of every piece of City Council legislation; reducing duplicative roles played by different city agencies; making it harder to raise taxes in the city; improving the process for holding special elections; and curbing the power of the Board of Standards and Appeals.