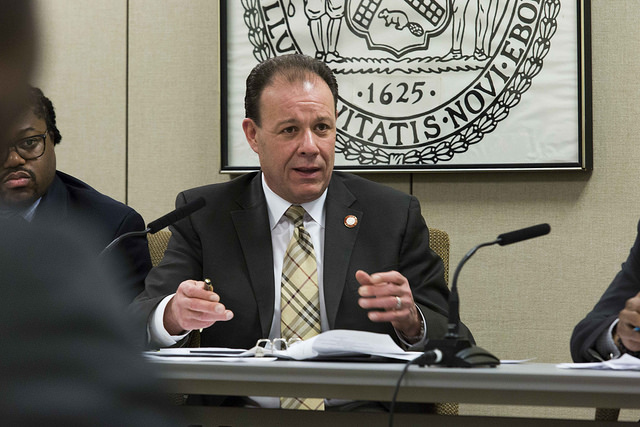 Over $17,000 from Gjonaj’s 2017 and 2021 City Council campaign accounts have gone to pay Dunnington, Bartholow, & Miller, a law firm representing then candidate Gjonaj in a suit where he is listed as the lead plaintiff against the City of New York, according to campaign finance records through July 2018.

Then a state Assembly member, Gjonaj initiated the suit during his campaign for City Council two weeks before the Democratic primary, alleging that the Bronx was overburdened with more homeless shelter and mental health patient beds, more so than any other borough. Specifically, the complaint argued that the Bronx pays more than its “fair share,” which is a provision in the city Charter providing for shared responsibility across the five boroughs for some of the most burdensome facilities.

The case has lasted for more than a year, and state court records show that Gjonaj switched attorneys in February to the firm of Edmond Pryor, his senior government advisor, according to LinkedIn. Gjonaj’s 2021 campaign account closed Dunnington, Bartholow, & Miller’s tab with a $9,372 payment in the latest filing over the summer.

City and state election law holds that campaign expenditures should be campaign-related. City elections are overseen by the Campaign Finance Board (CFB), where most of its regulations exist for candidates who opt-in to the board’s highly-praised matching funds program. Candidates who opt in get subjected to higher scrutiny and tighter rules as part of the deal for accepting public money.

It is unclear if the lawsuit constitutes campaign activity, with Gjonaj apparently pushing the boundaries by using campaign funds for a lawsuit that does not appear directly related to the act of running for office.

“I can’t see any way that funding a lawsuit with no relevance to a campaign can be a legal use of campaign funds, whether the candidate is participating in the matching funds program or not,” said election attorney Sarah Steiner. “The NYC Campaign Finance law is clear that campaign funds may be used only to defend matters related to campaign activity, and not at all to bring lawsuits.”

The CFB offers little guidance on these specific circumstances. For candidates who do not opt in to the matching funds program, there are fewer restrictions because they are not using public funds.

Council Member Gjonaj, a Democrat, did not opt in to the matching funds program, self-funding much of his past campaign, during which his campaign spent roughly $1.3 million, a record sum for a City Council campaign. The CFB rules document a wide variety of legal and illegal expenditures, but only if the candidate is using public funds. Nonparticipants are still subject to CFB jurisdiction and certain rules, and campaigns are audited by the CFB.

Two-thirds of all citywide candidates opted into the program in 2017, with 89 candidates, including Gjonaj, not participating. Many nonparticipants were incumbents facing limited or no competition who preferred to spend campaign funds by looser rules, at times to support government activity like participatory budgeting, though one Council member paid to air his own weekly radio show.

In 2016, the CFB changes were made, loosening some spending rules and adding one specific measure of oversight to police expenditures beyond those relating to matching funds. The rule states that the board monitors a non-exhaustive list of factors to check if campaigns are acting in bad faith, including “whether the campaign has demonstrated a pattern of making other expenditures not in furtherance of the campaign or impermissible post-election expenditures.”

A representative from the CFB told Gotham Gazette that it has not completed its cycle of audits of city campaigns where specific incidents can be investigated.

“Per CFB policy, we will not provide comment on issues associated with any candidate’s regular post-election campaign audit until after it has been completed,” said Eric Friedman, Assistant Executive Director for Public Affairs for the CFB, in a statement.

Gjonaj’s suit itself had a lot to do with the planks of his campaign, and he was glad to use those raised funds to pursue his agenda, according to his office.

“From public safety to recreational funding, Councilman Gjonaj made the case throughout the 2017 campaign that the Bronx wasn’t getting its fair share. It was a message that Bronxites inherently understood and rallied behind on Election Day. He’s a fierce advocate for the Bronx, and if he has to go to court to protect our community from City Hall’s unfair policies, he will, as he did,” said Reginald Johnson, Chief of Staff to Gjonaj, in a statement.

The Bronx Council member’s lawsuit, where several other Bronx community and business leaders are also listed as plaintiffs, calls for the city to halt further construction of homeless shelters in the Bronx and to release indexes to measure “beds to population.”

“The disproportionate number of Residential Facilities sited in the Bronx interferes with and causes damage to Bronx community residents; interferes with the community's use of public resources; and has subjected and will continue to subject the community, including plaintiffs, to significant hazards and risks to health, safety and property,” reads the complaint.

The city has sought to dismiss the suit, arguing that the plaintiffs do not cite a specific enough harm beyond the community at large.

Because Gjonaj filed his suit as a candidate and as a private individual, he is not subject to regulations handed down by a State Supreme Court judge in February. That ruling found that City Council members cannot sue the city in their official capacities because members are supposed to be represented by the city’s Law Department, which is already representing the city.

The CFB allows for suits from candidates to be paid for with public funds when the campaign’s eligibility for public funds is challenged in court. While Gjonaj’s suit relates to policies of his campaign, he is not subject to the same rules as those using matching funds and there are no specific city rules pertaining to his situation.

“It sounds like the lawsuit relates to governmental policy but was not brought in connection with his holding of office or campaigning for office,” said Jerry Goldfeder, a special counsel with Stroock & Stroock & Lavan LLP, specializing in campaign finance law. “As such, it is not proper to use campaign funds for such legal representation.”