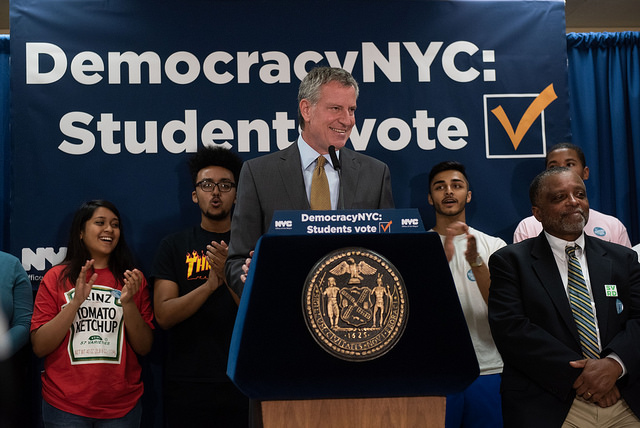 Voters approved three ballot proposals on Election Day to amend the New York City charter, the city’s foundational governing document -- the local constitution. The proposals related to the city’s campaign finance system, civic engagement, and community boards. Mayor Bill de Blasio, who empaneled a charter revision commission last year that put the proposals on the ballot, argued that the proposals would strengthen democracy in the city.

“The question in front of voters was simple: Are we going to be a city that works for everyone,” de Blasio tweeted after the measures passed. “New Yorkers answered with a resounding ‘YES, YES, YES!’”

Now that all three proposals are to be added to the charter, they will have to be implemented within the next few years. At the same time, another charter revision commission created through City Council legislation is also holding public hearings and is expected issue its own recommendations for the 2019 general election ballot.

Each of the three proposals approved this year included language around implementation, though some aspects will be left to certain individual and group decision-makers.

New York City’s voluntary public matching funds program, often seen as a model for the country, currently matches the first $175 of each campaign contribution at a ratio of 6-to-1. Proposal 1 raises the public match to 8-to-1 for the first $250 of a donation, thus increasing the impact of smaller donations, and will lower individual contribution limits to citywide candidates from $5,100 to $2,000, with lower offices like borough presidents and City Council members also seeing public match increases and lower contribution limits.

The goal is to empower small-dollar donors, giving their contributions a greater impact and disincentivizing candidates from depending on larger, wealthier donors and PACs. In theory, it allows first-time candidates not backed by deep-pocketed donors to run more competitive races.

The percentage of a candidate’s overall spending limit that can be received in public funds will be increased from 55 percent to 75 percent, and candidates will be allowed to receive public funds earlier in their races -- a change that could help insurgent candidates or candidates without deep-pocketed allies, but also could help incumbents rack up higher totals earlier.

Under the text of the amendment, the new campaign finance regulations will take effect on January 12, 2019. But, candidates who choose to participate in the public funds program and run for office in the 2021 primary elections can choose to opt out of the new rules, thus sticking with the current limits and system. Candidates must declare their intentions by July 15, 2019.

For non-participating candidates, meaning those who opt not to participate in the matching program, the limits and thresholds remain the same as they were before January 12.

All candidates participating in the public matching program will be brought under the new regulations starting in 2022.

The language of the amendment also includes a clawback provision should any of the changes to contribution limits and matching fund ratios be struck down in court. In such an instance, all the changes would be nullified except for the expansion of the public matching funds cap from 55 percent to 75 percent.

In all, the charter commission estimated that the new system would increase the amount of public funds disbursed to candidates by roughly 47 percent relative to the very busy 2013 city election cycle, which will in many ways be mirrored for 2021. In the 2013 cycle, the Campaign Finance Board doled out $38 million in public funds. Under the new rules, disbursements would have been an additional $18 million, for a total of $56 million, according to the charter commission’s staff research.

City Council Member Ben Kallos, who unsuccessfully attempted to increase the public funds cap to 85 percent through legislation, was glad to see voters pass the improvements to the system. In a phone interview, he implied that concerns about the cost of the new system were overblown, and said that enhancing the system is key to eliminating real and perceived conflicts of interest.

“It’s far less than the city lost on Rivington, and whether it was a case of actual corruption or just appeared improper, it had significant cost to our city,” Kallos said, referring to the scandal around the city’s sale of Rivington House and related allegations of pay-to-play involving the mayor. “Just the defense of our city cost about $6 million,” he added in reference to the mayor’s legal bills accrued during law enforcement investigations of his fundraising that saw no charges filed. “So whether it is to save $100 million around Rivington or the $6 million in legal fees, it pays for itself.”

He continued, “When the next mayor’s going to have a budget in excess of $90 billion, [$18 million] to make sure that that elected official would only be accountable to the voters without the influence of big money is worth every penny.”

The commission will also be tasked with improving translation services at voting sites and providing resources to community boards, as well as more generalized partnerships with community organizations to increase civic engagement.

The commission would remain a fixture after implementing its designated programs, and would be required to report annually on its programs, many of which can be by its own design.

The commission will consist of 15 members: 8 appointed by the Mayor, 2 by the City Council Speaker, and 1 by each Borough President. The mayor’s majority of board picks worried some that it would be a power-grab of sorts, given the wide latitude afforded to the commission with its mission of “enhancing civic engagement and strengthening democracy.” But in that respect, it is actually something of an improvement from the proposed Office of Civic Engagement, which would be completely under the mayor, per a bill introduced by City Council Member Brad Lander, who supported proposal 2 and celebrated its passage.

The commission will be empaneled on April 1, 2019.

Community board members, who are appointed by Borough Presidents and currently allowed to serve an unlimited number of two-year terms, will now be allowed only to serve four consecutive two-year terms. At that point, members will be term-limited out, but they will be allowed to be reappointed after a two-year interregnum. Current community board members will be allowed to serve an additional four terms no matter how long they have served as of 2019. Thus, no current member will be term-limited off their board until 2027.

To prevent heavy turnover that year and the following year, appointees commencing their term in 2020 will be allowed to serve five terms.

Borough Presidents will also be required to seek out diverse candidates for community board appointments, ensuring that different geographic areas are adequately represented. The proposal mandates that borough president reach out to community organizations active in the district and also allows civic groups and neighborhood organization to submit nominees to the Borough President. Community boards as constituted today are often criticized for being older and whiter than the communities they serve. Younger and more diverse voices on community boards could lead to very different outcomes. Borough presidents will also be required to make applications for community board member positions available on their websites with detailed requests for information about members, including work and community experience, demographic information (which would be optional) and conflicts of interest disclosures, among other things.

While community boards do not have a binding vote on land use and development matters, local City Council members often strongly consider and align with their home community boards. Four of the city's five current Borough Presidents expressed strong opposition to proposals 2 and 3 (Brooklyn's Eric Adams was the lone exception) and worked unsuccessfully to defeat them.

The civic engagement commission approved in proposal 2 will also be required to provide additional resources to community boards, such as “urban planning professionals and language access resources.”

Though it received a higher vote share than proposal 2, proposal 3 was widely seen as the most controversial of the three during the election season. While proponents noted that community boards are often older and whiter than the communities they represent, opponents said the measure would lead to a brain drain to the benefit of real estate developers. The worry was that an influx of new members without land use knowledge would allow developers to run roughshod over community interests. In the end, voters took the side of the proponents.

Ben Brachfeld contributed to this piece.