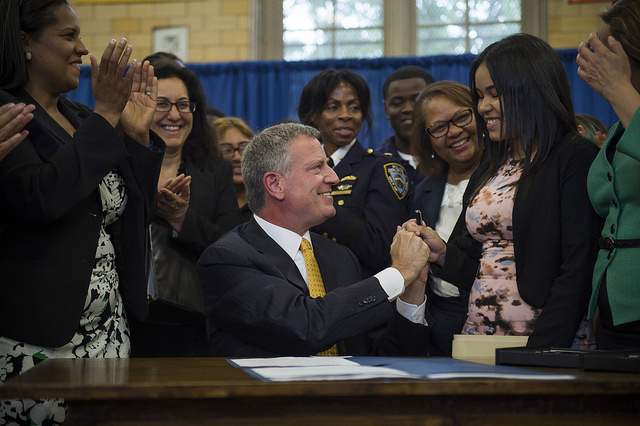 When a few Brooklyn Girl Scouts realized their middle school had no sanitary bins to dispose of menstrual products in the bathroom stalls, they sprung to action.

Putting their demands into a petition, they garnered 32 signatures from students during morning recess and presented the list to their principal. Before, girls had to throw away their wadded up menstrual products in a trash can outside of the restroom. After presenting the petition, however, their principal installed new sanitary bins, according to the girls.

“Girls didn’t feel comfortable coming to school on their period because there was no safe or secretive way to dispose of it,” said Arushi Kher, 14, of Bay Ridge.

“We realized this isn’t something that’s very hard to put into action,” added Skyler Kim-Schellinger, 14, of Park Slope. “It’s just that people aren’t realizing that it’s a problem.”

Over the next two years, these Girl Scouts of Troop 2653 focused on menstrual equity – or the accessibility of menstrual products and a fair surrounding culture – for their Silver Award, a Girl Scouts award promoting community service. They launched an investigation including public middle schools in school districts 15 and 20, which collectively cover neighborhoods in Brooklyn’s upper west and southwest corners, including Boerum Hill, Park Slope, and Bay Ridge. They found that only 18 percent of these schools met the standards of providing both sanitary bins in each stall and free menstrual products in the bathroom, the latter of which was mandated by a 2016 package of city laws aimed at menstrual equity.

To collect data on the public schools’ restrooms, Kher and Kim-Schellinger, along with a few other Girl Scouts who later dropped out of the project, called, emailed, and – when those two methods produced little – physically went to the schools. After contacting Department of Education Director of School Facilities of North Brooklyn Joseph Lazarus, they were also accompanied by Deputy Director Alea Stormer in their search.

Although some schools did not answer their requests, they found that most schools they were able to investigate failed to meet one or both of their standards. Five schools also had menstrual product dispensers that charged money, despite the city law stipulating that these products would be free. Kher and Kim-Schellinger presented their efforts to ensure that local schools were both following the law and meeting other important needs of young women during a December interview at the district office of City Council Member Justin Brannan, who helped connect the Girl Scouts with journalists when he learned of their findings and wanted to bring attention to the problems they identified.

“Every building with a middle or high school has dispensers, receptacles and sanitary product, as well as allocation in their custodial budget for supplying and re-stocking," said Department of Education spokesperson Miranda Barbot, in a statement to Gotham Gazette. "We have followed up with all of the schools in these districts to ensure they have the resources they need, and thank the Girl Scouts for their advocacy and partnership in the work.”

It’s unclear if all the schools have been brought up to compliance with the law or with the girls’ dual standards, which Gotham Gazette asked the DOE about. It's also unclear whether there are major gaps in implementation at other schools around the city.

The girls’ project comes at a time when menstrual equity is having an important extended moment in the national, even international, spotlight. Multiple states have moved to eliminate a controversial “tampon tax,” the sales tax often attached to feminine hygiene products despite the fact that other ‘basic-necessity’ products are exempted. The state of New York ended its tampon tax in 2016.

“When New York City passed the historic law to ensure all public school students had access to free tampons and pads two years ago, we celebrated. But what's the point of fighting to pass laws if they ultimately aren't being implemented or enforced?” said Brannan, a first-term Democrat who represents souther Brooklyn’s 43rd Council District, in an emailed statement. “I applaud the Girl Scouts for doing this important investigative work which will force the DOE to finally comply with the law. We adults can all learn a lesson from their example.”

Kher and Kim-Schellinger officially received their Silver Award from the Girl Scouts in October, after the completion of their two-year menstrual equity project, although the effects of their work are just beginning to be felt.

“I know in my eighth grade year, some girls were talking about getting their periods and how it sucks to have cramps and whatever,” Kher said. “But, then I just remember someone saying, ‘But, we have those bins which is really nice. No guy ever has to see us throw out our pads.’ And I was like, ‘That was me.’”

This story has been updated with comment from the DOE, provided shortly after the story first published.