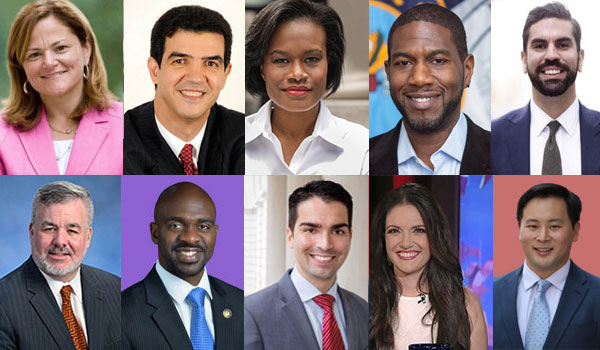 Update: This article and its headline have been updated to clarify that 10, not 11, candidates officially qualified for the first televised debate of the race. The original version of this article included Assemblymember Latrice Walker, who appeared to have crossed the financial threshold but was ruled not to have by the Campaign Finance Board after its review of her filings.

It’s going to be a crowded stage -- but not as crowded as it might have been.

Ten of the 20 remaining candidates in the special election for New York City Public Advocate have officially qualified for the first of two televised debates in the race, scheduled for February 6. Candidates had till last week, when the latest campaign finance filing was due with the city Campaign Finance Board, to raise and spend at least $56,938. The citywide election is February 26. 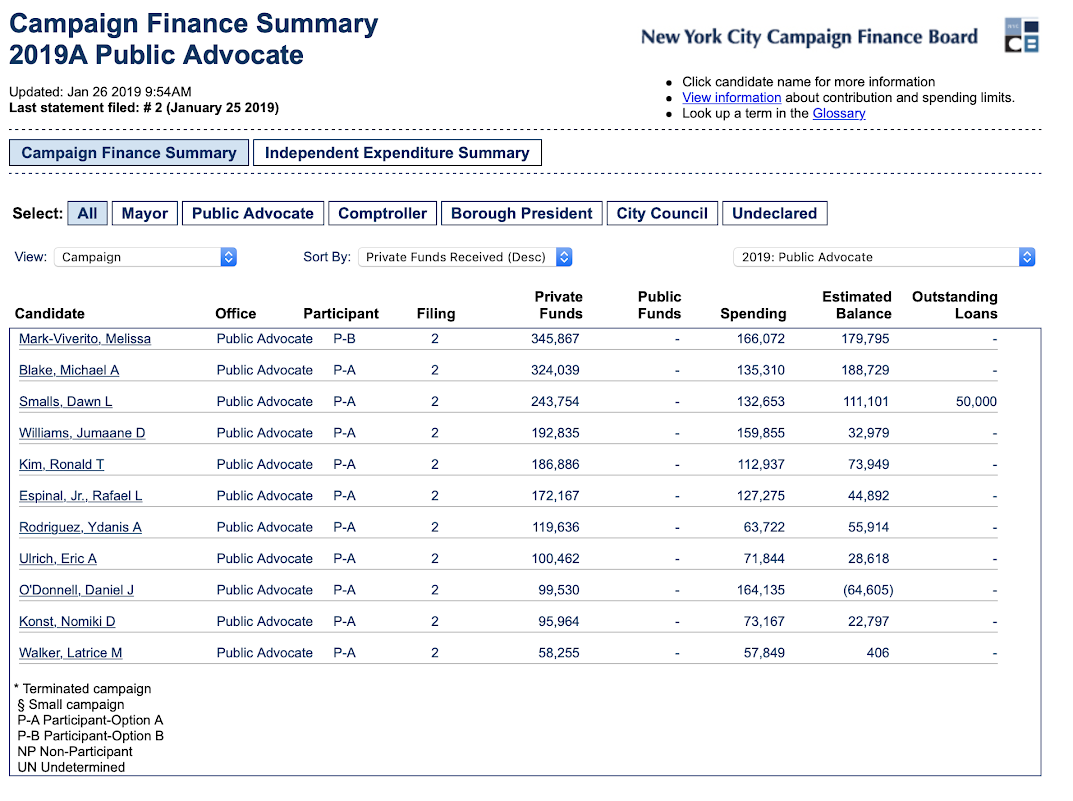 Mark-Viverito leads the pack in funds raised, with $346,000, though about half of that was transferred in from her prior campaign account, and spent $166,000 (which, notably, is just $4,000 short of the financial threshold for the second “leading contenders” debate on February 20). All of the ten candidates are participating in the CFB’s public matching funds program, which is meant to incentivize campaigns to raise money from small-dollar donors, though there are two systems within the program they must choose from.

Candidates can opt in to one of two models -- the old model that matches contributions up to $175 at a 6-to-1 ratio or the new model, which gives 8-to-1 matches for donations up to $250. Both are at play in this special election and others through the 2021 city cycle, after which the new model takes over completely. That model was passed by voters after being recommended by Mayor Bill de Blasio’s 2018 charter revision commission, and the City Council recently passed legislation to apply it to this year’s public advocate races (the special election and subsequent fall election).

Mark-Viverito is the only one sticking with the old system while the other nine candidates opted in to the new one, which also comes with lower contribution limits overall. When the City Council passed legislation to allow the new system into the special election, Mark-Viverito indicated a belief that the Council members running and others in the body were acting in order to hurt her chances of winning. Some responded with confusion or indignation, pointing to the fact that the new system seeks to reward small-dollar fundraising and remove the influence of larger donors.

To qualify for public funds for the public advocate special election, the candidates have to meet a dual threshold, raising at least $62,500 from a minimum of 500 contributors. Initial numbers indicate that, of the 10 candidates who have raised enough to get into the debate, Rodriguez and Konst are the only two that don’t seem to have met the public funds threshold yet. The first round of public funds will be disbursed on Wednesday. First, the city Board of Elections will meet on Tuesday for a hearing to rule on several challenges to candidates’ ballot petitions and therefore finalize the February 26 ballot -- there is therefore a chance that not all ten candidates who have qualified for the debate will be on stage, as some do have petition challenges against them.

Both the February 6 and 20 debates will be broadcast by Spectrum News NY1, and will be freely accessible on its website and Facebook page. It will also be livestreamed on NYC Life, the city-run media channel. The debate sponsors include Politico New York, Citizens Union, the League of Women Voters, the Latino Leadership Institute, Borough of Manhattan Community College, NAACP New York State Conference Metropolitan Council, and Delta Sigma Theta Sorority, Inc., East Kings County Alumnae Chapter.

The special election is occurring because former Public Advocate Letitia James was elected Attorney General and vacated the seat. The winner is only guaranteed the position through the end of this year, while the fall election will determine who holds it for 2020 and 2021, the next city election cycle.

[READ: Everything You Need to Know About the Special Election for Public Advocate]