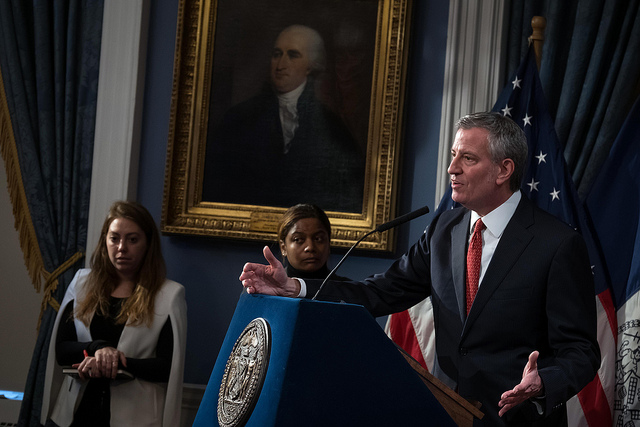 When Mayor Bill de Blasio presented his preliminary budget proposal last year, he issued solemn warnings about the threats posed by cuts in the state budget and from federal maneuvers that could mean fewer resources for the city. On Thursday, de Blasio repeated that message, but in more dire terms, as he unveiled a $92.2 billion spending proposal for the 2020 fiscal year that starts July 1.

While the plan calls for another significant annual increase in spending -- about $3 billion, or 3.4 percent, from the budget adopted last June -- the mayor also said his administration would have to make difficult decisions in the coming months, instituting a new savings program to find efficiencies in city government while ensuring that front-facing services do not suffer.

“We have some tough choices up ahead under any scenario,” de Blasio said in City Hall’s Blue Room. “We will be guided by the need to make hard choices, to find savings and then when we have to choose, we will favor the priorities that we believe are most strategic and high impact. If a program is nobly intended but not as strategically central or not as valuable, that’s where you will find the cuts.”

The mayor’s proposal will soon become the subject of City Council hearings, and the mayor will be in Albany on Monday to testify at a state budget hearing, where he will tell legislators they must help him undo elements in Governor Andrew Cuomo’s executive budget plan, which the mayor said totaled about $600 million in proposed cuts and cost shifts to the city.

Overall, the preliminary budget represents a nearly $20 billion increase since the last budget modification before de Blasio took office in 2014.

But de Blasio cautioned of an economic recession on the horizon, the symptoms of which are already beginning to show and are forcing the city to tighten its belt. The city is projecting that personal income tax revenue would be $935 million less this fiscal year than last year, for instance, with most of the drop off in December and January revenue collections. (Similarly, Governor Andrew Cuomo announced earlier this week that the state is expecting a $2.3 billion shortfall because of lower income tax revenue. De Blasio noted that Cuomo had already looked to the city to make up state deficits before the recently-announced shortfalls.)

Along with those concerning tax receipts, de Blasio pointed to additional pressure from developments at the state and federal levels. He pointed to the proposed Cuomo cuts and cost shifts that the city may have to bear in spending on education, financial assistance and health services for needy families, and spending for at-risk youth. “These are permanent cuts...when these cuts occur in the state budget, it’s not just for one year. The money goes away, never comes back,” he said, promising to oppose them but conceding that some losses may happen despite the city’s best efforts.

The governor's administration later sought to rebut the mayor's comments on decreased education funding. "We don't know how the City considers a $282 million school aid increase over last year a cut, and a cut from what you ‘expected’ to get is a bizarre concept," said Morris Peters, a Division of Budget spokesperson, in a statement. "The state has a formula that outlines what the funding increase will be year to year – so why the City would expect to get something higher than that is nonsensical and a pure fabrication."

The threat to the city emanating from Washington is far less certain. The federal government faces a February 15 deadline to reach a budget agreement and preempt another disruptive government shutdown. If that agreement fails, de Blasio said the state would lose about $500 million every month starting in May, with the city losing about $110 million monthly. There are the more nebulous effects of the fluctuations in the stock market, which have been partly to blame for lower city revenue, and federal trade policy.

Taking those factors into account, the mayor announced that for the first time since he took office in 2014, he would institute a PEG (Program to Eliminate the Gap), which former Mayor Michael Bloomberg employed to control agency costs. Unlike Bloomberg’s program, however, de Blasio does not plan to institute a citywide percentage-based cut in spending at all or most agencies. Instead, he said he will direct most if not all agencies to cut a collective $750 million in costs by April, including by expanding a partial hiring freeze that the city estimates has saved $448 million since it was announced in April 2017. Each agency will receive a target figure for spending cuts from the city’s Office of Management and Budget, de Blasio said.

The preliminary budget also includes $1 billion in savings across fiscal years 2019 and 2020, and $1.6 billion in savings on healthcare spending in fiscal year 2020, increasing to $1.9 billion in fiscal year 2021. Yet, notably the mayor did not dedicate additional resources to the city’s reserves, keeping them flat over last year -- they include $1 billion in the general reserve, $250 million in the capital stabilization reserve, and $4.5 billion in the Retiree Health Benefits Trust Fund. Budget watchdogs have repeatedly said that while the city has solid reserves, they are not enough, especially as de Blasio continues to increase spending, to truly weather a recession.

The mayor’s preliminary budget includes few major new investments in programs, and continues funding for those that are already underway or have been announced by the mayor in the last few months. Those include $25 million for NYC Care, which will give healthcare access to uninsured New Yorkers. The program is expected to launch in the Bronx this summer and will expand citywide by 2021 at a cost of $100 million annually, serving 600,000 people. The city also plans in next fiscal year to spend $106 million to continue funding Fair Fares (half-priced MetroCards for low-income New Yorkers); $5.3 million to speed up Crisis Intervention Training for NYPD officers; $25 million to expand 3-K for All in the Bronx and Brooklyn; and $2.7 million to increase bus speeds by 25 percent by the end of next year.

Also, for the first time ever, the city’s preliminary ten-year capital strategy reached triple digits, for a high of $104.1 billion, an increase of 8.7 percent. The city’s expense and capital budgets are calculating and presented separately. Every two years the capital strategy is re-established.

“You’ve all heard the truism that budgets are a statement of values. That’s gonna play out in these coming months,” de Blasio said. “If we get continued good news from Washington, from Albany, from our broader economic context, we’ll have more freedom. If we get bad news, we’ll be ready to make some very tough decisions.”

In the next few weeks, the mayor’s budget proposal will be dissected in a series of City Council hearings, where officials from the administration will be called to testify. On Thursday, the Council acknowledged the city’s difficult fiscal position but indicated that it was ready for tough negotiations.

“We know there are challenges presented by the economy, as well as funding shortfalls from the state, particularly in education and social services. We will work with the Administration to get our fair share from Albany,” said Council Speaker Corey Johnson, finance committee chair Daniel Dromm, and capital budget chair Vanessa Gibson, in a joint statement. “But even while recognizing the challenges, we also know this City’s economy is strong and we will fight for a fiscally responsible plan that protects the social safety net.” They vowed to push for funding for Fair Fares, education, immigrant families, and permanent housing for those who need it. “These are our values and we will never walk away from them.”

Comptroller Scott Stringer also took note of the “warning signs” for the economy and commended the mayor for instituting a PEG, which he has called for repeatedly. “It’s past time for City agencies to seriously evaluate how effective their spending really is in achieving results for New Yorkers,” he said.

Year after year, fiscal watchdogs and rating agencies have praised the city’s responsible budgeting but have also raised alarms about spending trends that could backfire in an economic crunch. Andrew Rein, president of the nonprofit Citizens Budget Commission, reiterated some of those concerns on Thursday, noting that the budget showed “modest restraint” in increased spending.

“Much bolder action is needed to ensure the City is prepared for an economic downturn,” Rein said. “Spending growth should be limited to inflation and reserves should be increased. The PEG announced today should be developed with an eye to making operations more efficient and generating recurring savings.”

The mayor said his budget did not include any new funding for the MTA, funding for which is expected to be a major source of contention between de Blasio and Cuomo over the next several months.

A state budget is due by April 1, at which time the mayor and City Council will have significantly more information to work toward their next spending plan, which is due by July 1.

Note - This article has been updated with a statement from a state Division of Budget spokesperson.