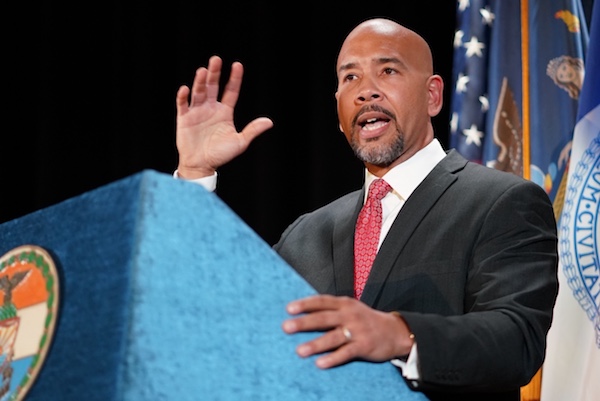 Bronx Borough President Ruben Diaz Jr. delivered his tenth State of the Borough address on Thursday afternoon, where he informally advanced his inevitable campaign for mayor and outlined his vision of a more progressive New York City, using his work in the Bronx as a blueprint.

As is customary in “state of” speeches, Diaz Jr. outlined what he believes are the top accomplishments of his tenure, highlighting the steadily low crime rate of fewer than 100 murders per year for six consecutive years, environmental projects including the revitalization of Orchard Beach and the reopening of Roberto Clemente Park, and a combined $85 million in capital funds to public housing and 443 school projects. The latter investment, Diaz Jr. said, comprised “nearly a quarter of my total capital allocation.”

Creating a better future for the Bronx’s children emerged as the key theme of Diaz’s speech at the Samuel Gompers campus of H.E.R.O. High School in the South Bronx, as he touched on ideas for addressing climate change, promoting local small businesses, creating affordable housing, and funding anti-violence programs.

The Democratic borough president called for municipal control of the city’s subways and buses, a full 2020 Census count, and a series of public housing reforms under the social media campaign #CleanUpNYCHA, most prominently including new state legislation he supports that proposes a rent reduction for NYCHA tenants when they fail to receive “basic services.”

“If social media shaming is the only way we’re gonna get results, then dammit, we’re gonna shame them,” he said of NYCHA, and the city government that runs it.

At it has been in years past, swiping at Mayor Bill de Blasio was another recurring theme of the address, as Diaz Jr. admonished the mayor’s plan to build a jail in Mott Haven, inaction on NYCHA, and “sweeten[ing] the pot for Amazon.”

On the other hand, he commended Staten Island Borough President James Oddo for his work fighting opioid addiction. Diaz Jr. called for a multiagency effort that “matches compassion with enforcement.”

The borough president spoke to a need to reform all levels of education. He called for an increase in the number of school buses to “protect children from the dangers of the streets,” vocational programs in high schools, and better career opportunities for CUNY graduates, such as in local tech and finance.

A cornerstone of the speech was his introduction of Camp Junior, created in honor of Lesandro “Junior” Guzman-Feliz, a 15-year-old Bronxite who was infamously beaten to death by gang members last summer in a case of mistaken identity. The camp, which will be located in Harriman State Park in Rockland and Orange Counties, is open to kids age 9-13 who live in certain Bronx zip codes, including the neighborhoods of Mott Haven, Port Morris, Highbridge, Morris Heights, Morrisania, Tremont, Fordham, Longwood, Van Nest and parts of Parkchester. It introduces campers to an anti-violence curriculum with educational and outdoor recreational activities. After visiting the camp, Diaz Jr. said, “I saw in my mind just how amazing this camp could be, how we could create an oasis for this borough’s youth,” he said. The initiative drew a standing ovation from the attendees.

Diaz Jr. noted that Bronxites under 18 comprise 25 percent of the borough’s population.

On fighting climate change, Diaz Jr. said, “The environment has always been my top priority,” and pointed to his 2008 initiative to provide tax credits to buildings with green roofs. He pledged to only fund future projects with a “green component,” but did not specify what exactly he considers green.

The Trump Administration ran as an undercurrent throughout the speech, as Diaz Jr. sought to offer New York City as its aggravator and antithesis.

Deputy Bronx Borough President Marricka Scott-McFadden, who was introduced by U.S. Senator Charles Schumer, the minority leader, gave a brief speech introducing Diaz Jr. She also played a video promo for a new television show, Desus and Mero, a late night program hosted by the two eponymous Bronx comedians, where they visit Diaz Jr.’s office and ask if he has intentions of running for the White House. “No,” Diaz Jr. said. “But I would like to go to another house, perhaps in the east side of New York City, called Gracie Mansion.”

As it has been for years, the prospect of a Diaz Jr. run for the mayoralty in 2021 -- a race that is in some ways now already underway -- hung over the State of the Borough address. Each year the talk becomes more overt, it seems.

While he said he agreed with closing the Rikers Island jail complex, Diaz Jr. denounced de Blasio’s efforts to build a new jail in the Mott Haven neighborhood of the South Bronx and questioned the city’s priorities, calling the de Blasio administration “entirely misguided,” pointing to schools in the Bronx that struggle to secure funding for items as simple as chairs.

Diaz Jr. also advocated for expunging the records of those with marijuana charges if the state government passes adult use legalization, as is expected this year.

The housing crisis in both the Bronx and citywide comprised a significant portion of Diaz Jr.’s speech. At 20 percent, the Bronx has the lowest rate of home ownership in the city, he said. He decried the city’s Third Party Transfer Program that allows city-selected sponsors to purchase and “improve and preserve,” as the Housing Preservation and Development Department explains, affordable housing. Critics of the program, including Diaz Jr., argue that many of the homes are seized from families of color and turned over to developers.

Diaz Jr. also said there must be real urgency to address the city’s transit crisis. He called for new funding streams for the state-run MTA, like earmarking revenue created from congestion pricing, a contentious issue that has yet to be signed into state law but is supported by Diaz Jr. and Governor Cuomo, among others. The borough president chided the poor relationship between Cuomo and de Blasio as a significant factor behind the MTA’s state of disarray. Diaz Jr. has long been Cuomo’s ally, though he did call for the state to return control of the subways and buses back to the city, something Cuomo has not publicly expressed support for.

Near the end of his remarks, Diaz Jr. spoke to the importance of filling out the 2020 Census to maintain the Bronx’s representation in Washington, D.C. In an attempt to ease concerns over a potential citizenship question that the Trump administration has advocated but is the source of a legal challenge, Diaz Jr. promised, “I will not answer any question about my citizenship status and I encourage all of my fellow citizens to do the same.”

The Census determines congressional representation and federal funding on a number of fronts. With its high poverty rates, a great deal of federal dollars wind up in the Bronx.

Diaz Jr. closed his address by condemning bigotry and pleading to the spirit of equality in an increasing unaffordable New York City. He displayed a photograph of himself at a gay pride event and said, “New York must never ever lose its authenticity and flavor.” (This appeared to also provide a public response from Diaz Jr. to his father’s homophobic comments that have shaken the City Council and beyond in recent weeks, though he has also previously denounced the statement.)

“The challenge of our time,” Diaz said, “is to provide a chance in an equitable city while keeping New York’s soul.”