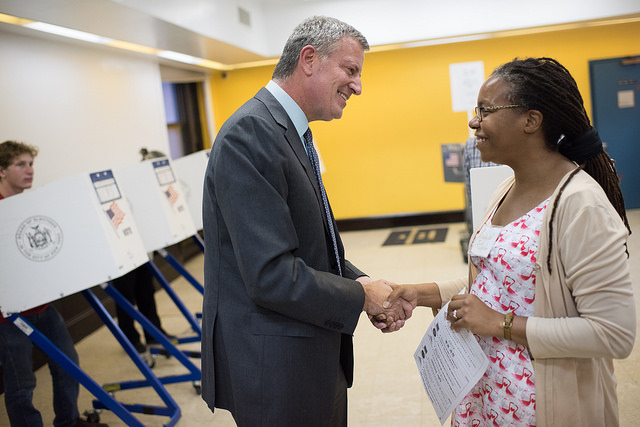 For weeks, intensifying ahead of Tuesday, friends, family, acquaintances, and colleagues have been asking for advice about who to vote for in the special election for Public Advocate. My response usually starts with a question: What do you most want in a Public Advocate?

Sometimes that’s followed by another: How much time do you have? There are 17 candidates who will be on Tuesday’s ballot, each with certain qualities, qualifications, and visions for the office. The Public Advocate has wide latitude for how he or she approaches the job, making the question of what you most want in the office-holder key, especially given the broad and deep pool of candidates now running.

While the Public Advocate’s office comes with a modest $3.5 million annual budget and is oft-ridiculed, it actually has a lot of responsibility and can have significant impact on public policy, not to mention the fact that the post can be an important proving ground for pursuing higher office (see the last two Public Advocates: Mayor Bill de Blasio and Attorney General Letitia James). The four individuals who have been elected Public Advocate to date have brought different skills, priorities, and approaches to the role.

The Public Advocate is the citywide official charged with being a watchdog over the rest of city government and with being an ombudsperson for the public. The Public Advocate has the power to introduce legislation to the City Council, a seat on the city’s public pension board, and a healthy bully pulpit and springboard underneath them. The Public Advocate is often expected to be a willing critic of the Mayor, taking the city’s chief executive to task for blurring ethical lines or spending too much or flubbing the rollout of a program or traveling out of town too often -- and so on.

On Tuesday, the many candidates will be listed with a “party” name they made up for this unique, “nonpartisan” election -- the first citywide special election since the current city government system was enacted after the 1989 charter revision -- that do give some indication of how they’ve framed their campaigns. (For more on how the candidates have sought to define themselves, read here.)

The election is open to all registered voters across the city, with polls open 6 a.m. to 9 p.m. Very low turnout is expected from the city’s roughly 5.2 million registered voters, but perhaps given recent Trump era trends and the fact that there are so many candidates who’ve been campaigning New Yorkers will exceed those forecasts.

Here’s how to vote based on what might be important to you:

Do you want a Public Advocate who…

...has high-level experience in the federal government, and little local political muck on their shoes?
Go with Dawn Smalls, an attorney who worked in both the Clinton and Obama administrations.

...knows both federal and state government?
Go with Michael Blake, a member of the state Assembly who worked on both Obama campaigns and in the administration.

...has the highest level of experience in city government?
Go with Melissa Mark-Viverito, the former City Council Speaker.

...will agitate and legislate, is as likely to lead a protest through the streets as introduce a bill?
Go with Jumaane Williams, the City Council member who aptly calls himself an “activist elected official.”

...will throw rhetorical bombs and rage against the machine from the far left?
Go with Nomiki Konst, an activist and journalist who was a Bernie Sanders delegate and pulls no punches, at times overzealously, while calling for policies like a $30 minimum wage.

...is thinking about urban policy for the future, with an eye on sustainability and a green economy?
Go with Rafael Espinal, a City Council member focused on legislating for a more “livable city.”

...is most focused on engaging New Yorkers to participate in civic life and impact the direction of public policy that’s best for their communities?
Go with Ben Yee, who wants to take his informal but informative civic education program to new heights in elected office.

...is the most conservative, with nice things to say about President Trump?
Go with Manny Alicandro, the other Republican in the race, who is far more aligned with Trump than Ulrich is.

....will focus on immigrant communities and transit issues?
Go with Ydanis Rodriguez, a City Council member and himself an immigrant, who has led the Council’s transportation committee for several years.

...has been an LGBT trailblazer and leading advocate for LGBT rights?
Go with Danny O’Donnell, an Assembly member from the Upper West Side.

...will call out and examine overspending by the city?
Go with Ulrich.

...will focus on the legislative powers of the role?
Go with Mark-Viverito, Espinal, or Williams.

...is best positioned to run policy and program oversight operations of the office?
Lean toward Mark-Viverito, but consider Smalls.

...will continue Tish James’ use of the office as a law firm of sorts?
Go with Smalls.

...will transform the office to focus on alleviating student debt?
Go with Ron Kim, a state Assembly member who has pledged to reinvent the office.

...ardently supported the plan to bring an Amazon campus to Queens?
Go with Ulrich.

...thought the Amazon deal could be reworked to benefit New Yorkers?
Choose from Smalls, Blake, and Williams.

...will take on real estate developers?
Choose from David Eisenbach, a Columbia professor and activist, Konst, O’Donnell, and Williams.

...will continue to lead the push to close the Rikers Island jails?
Go with Mark-Viverito.

...thinks Rikers Island should remain home to most of the city’s jail population?
Go with Ulrich or Alicandro.

...has negotiated neighborhood rezonings with the de Blasio administration and may be able to help as others attempt to do so?
Choose from Mark-Viverito, Espinal, and Rodriguez.

...is supportive of charter schools?
Go with Blake, Ulrich, or Tony Herbert, a consultant and activist.

...would bring greater gender balance to citywide government?
Go with Mark-Viverito, Smalls, or Konst, the three women in the race (Latrice Walker will also be on the ballot, but she dropped out weeks ago).

...would continue an established focus on helping more women run for elected office?
Go with Mark-Viverito.

...has been a criminal justice reformer?
Choose from Mark-Viverito, Williams, and Blake.

...will focus on NYCHA tenants?
Choose from Blake, Herbert, and Mark-Viverito.

...will make affordable housing a top priority?
Go with Williams.

...has been an ally for military veterans?
Go with Ulrich.

...will make small businesses a top priority?
Choose from Eisenbach and Rodriguez.

...will push for change at the MTA?
Choose from Mark-Viverito, Rodriguez, and Blake.

...has an eye toward more forward-thinking transit policy?
Choose from Espinal, Rodriguez, and Mark-Viverito.

...will focus on minority- and women-owned businesses (M/WBEs)?
Go with Blake.

...will be completely independent?
Choose from O'Donnell, Konst, Smalls, Eisenbach, Alicandro, and Herbert.

...has been a close ally of Mayor de Blasio’s but also pushed him on several issues?
Go with Mark-Viverito or Williams.

...has a solid working relationship with Governor Cuomo and state legislative leaders?
Go with Blake.

...is most ready to step in as Mayor if there is a crisis that necessitates it?
Lean toward Mark-Viverito, but consider Blake.

...won’t use the position too evidently as a stepping stone to run for Mayor?
Choose from O’Donnell, Smalls, Konst, Yee, or several others not named Ulrich, Blake, or Mark-Viverito.

[WATCH: 15 Minutes with Each of 14 Candidates for Public Advocate]