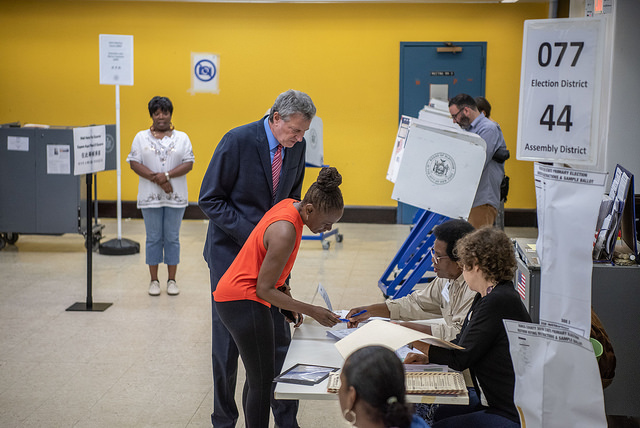 On Monday, the 2019 Charter Revision Commission heard from election experts from across the country as commissioners consider three potential election-related alterations to the city charter: ranked-choice voting, redistricting, and democracy vouchers.

The commission is in the middle of a year-long process of public hearings and private discussions, which will yield proposals to change the city’s foundational laws that will go before voters this November. The scope of those proposals is to be determined. After a series of hearings and meetings, the commission recently announced its four focus areas, and Monday’s hearing was the first dedicated to experts on one of the broad areas, which in addition to elections include governance, finance and land use.

The 2019 commission follows a 2018 commission called by Mayor Bill de Blasio, which was populated only by his appointees and put forth three proposals that voters approved this past November, including to lower individual campaign contribution limits and increase public matching funds, creation of a civic engagement commission, and term limits for community board members.

The 2019 commission was created through City Council legislation spearheaded by Manhattan Borough President Gale Brewer and then-Public Advocate Letitia James. Its commissioners are appointed by a variety of elected officials, though the mayor was allotted a plurality. The chair was chosen by the City Council Speaker, Corey Johnson.

At Monday’s hearing, experts who testified offered a variety of ideas on the topics at hand.

Ranked-Choice Voting
A panel of six voting experts argued overwhelmingly for the merits of a ranked-choice voting system.

Ranked choice voting asks voters to order their preferred candidates rather than select just one. Under one design, if one candidate does not meet the given threshold (say, 40 or 50 percent of the vote) when the first round of selections are tallied, the candidate with the fewest first-place votes would be eliminated, and the voters who selected that candidate would have their second choices receive their votes. This process then proceeds until one candidate hits the magic number.

Ranked-choice voting could eliminate costly, low-turnout runoffs, mollify voters’ concerns over splitting party votes in a race with many ideologically-similar candidates, and allow for a winner to emerge with a clear majority rather than a plurality.

New York City is particularly well-suited to a ranked-choice voting system, argued Susan Lerner, executive director of Common Cause New York, since voters tend to favor Democrats over Republicans by a wide margin, and where many Democrats and few Republicans run.

Panelists further argued that ranked-choice voting promotes more civil politicking, pointing to the sometimes contentious nature of the public advocate special election that was decided on Tuesday. That election also had 17 candidates on the ballot and was held up by some as a good example of where ranked-choice voting would be beneficial.

However, one panelist, Craig Burnett, an assistant professor of political science at Hofstra University, cautioned the commission against diving into ranked-choice voting. “A lot of voters can figure things out when they’re talking about the presidency, where there’s a lot of information,” said Burnett. But as races and candidates become more obscure and information less ubiquitous, “ranking becomes an even more difficult task.”

The commission expressed similar concerns over educating a city of more than eight million citizens about a new voting system. “I’m lucky if I know one or two Council candidates in an open seat,” said commissioner James Caras, who asked if ranked voting can produce “bizarre results,” as a product of voters arbitrarily assigning numbers to unfamiliar candidates.

Bella Wang, chair of voting reform at New York’s chapter of the League of Women Voters, pointed to the 2018 Maine gubernatorial race, which was the state’s first experience with ranked voting. Eight percent of voters ranked each of the candidates, and 80 percent ranked more than one candidate, indicating a widespread comprehension of how the system operates, she said.

Commissioner Merryl Tisch inquired about the possibility of disenfranchising voters while commissioner Sal Albanese expressed similar concern over minority participation, but the panelists disputed the idea that ranked-choice would have any effect at all on turnout. John Arntz, director of the San Francisco Department of Elections, insisted that the city will have to invest in educating voters about the new system, particularly immigrant communities and non-English speakers.

Other concerns raised involved a timetable for implementation (Karen Brinson Bell of the Ranked Choice Voting Research Center explained that she implemented ranked voting in North Carolina in just 86 days, though that is not the ideal timeline), the manner in which a winner is announced to the public, clarification over how many times voters would have to head to the polls to select a winner (typically just once), and skepticism about ranked voting producing a winner with a clear majority. The experts showed some disagreement over whether ranked voting will lead to a clear majority, with some arguing that a win with 48 percent still leads to voter confidence in the process.

Redistricting
A different panel of experts testified before the commission to discuss how New York City should draw its City Council districts, including TJ Costello, the former vice-chair of the Independent Citizens Redistricting Committee (ICRC) in Austin, Texas, which other panelists deemed the gold standard of redistricting. Redistricting occurs after each U.S. Census, the latest of which is about to occur in 2020.

Austin’s redistricting system is complex, involving more than 50 public meetings and a long timeline to decide members of the ICRC. But it also results in a robustly independent and representative redistricting commission, according to Costello. The charter revision commissioners questioned if such an involved process can be instituted in New York, which is more than eight times more populous than Austin. Michael Li of the Brennan Center for Justice said that it’s achievable with enough time.

Li also commended New York City’s current redistricting system. The process, he said, “has a lot of the right pieces in place: there is a commission that draws the district maps” that Li said is well-staffed, holds open meetings and engages the public. But he offered an important caveat, saying the process is susceptible to politicization, with “relatively few checks on who gets appointed to the commission.”

Jeffrey Wice of the SUNY Rockefeller Institute of Government said an independent board is a “judgement call,” and that legislators can objectively redistrict according to the guidelines set up by Section 5 of the federal Voting Rights Act, though the Supreme Court rendered Section 5 null in 2013. Contrarily, Esmeralda Simmons, founder of the Center for Law and Social Justice at Medgar Evers College, argued for the need for an independent board. The rules as they stand, she said, are “skewed against black and Latinx voters” and overrepresent Republicans.

Commissioner James Caras asked the panel to point to specific incidents of poor local redistricting that an independent commission could’ve solved. The panelists could not offer any examples, but Li pointed to a new district that formed in California after citizens banded together in an area particularly vulnerable to wildfires to gain stronger governmental representation for their concerns.

Albanese asked about the negatives of implementing the so-called gold standard that Austin has modeled. Li offered the difficulty of finding enough citizens interesting in serving, but Costello argued New Yorkers simply need sufficient outreach and education. Panelists further eased commissioners’ fears about a costly process and the potential for corruption from bad actors.

Campaign Finance
The last item on the agenda was the question of implementing a new campaign finance system: democracy vouchers. The program formed in 2017 in Seattle, the only city in the country that uses it, wherein the government mails four $25 vouchers to registered voters and asks voters to assign their vouchers to their preferred candidates and mail those in, leading to money disbursed to candidates. Seattle is currently working to offer a digitized process to supplement the mail-in version. Candidates must opt in to the program.

The panel included two of the leading forces behind Seattle’s democracy voucher program, Wayne Barnett and Alan Durning, alongside representatives from New York City’s Campaign Finance Board and other election experts who expressed varying levels of enthusiasm for the program.

Similar to the redistricting portion, many of the commission’s inquiries surrounded logistical challenges that New York City poses, which smaller cities face to lesser degrees. The panel generally conceded that the program is too new to definitively answer many of the commission’s questions. Barnett and Durning, however, were able to demonstrate the relatively low cost of the program of just over $2 million total, though that number will inevitably rise in New York City.

The panelists had mixed reactions to Albanese’s criticism, but some argued that since the city’s system was changed only last year, they should give it time to play out before radically altering it. While Durning characterized the current system in New York City as one of the country’s best, “democracy vouchers are the most democratizing and egalitarian method of public funding for a campaign that has been invented yet. It makes every eligible participant in the city worth the same amount to a candidate, whether they’re a bartender or a bank president,” he said. “100 bucks.”