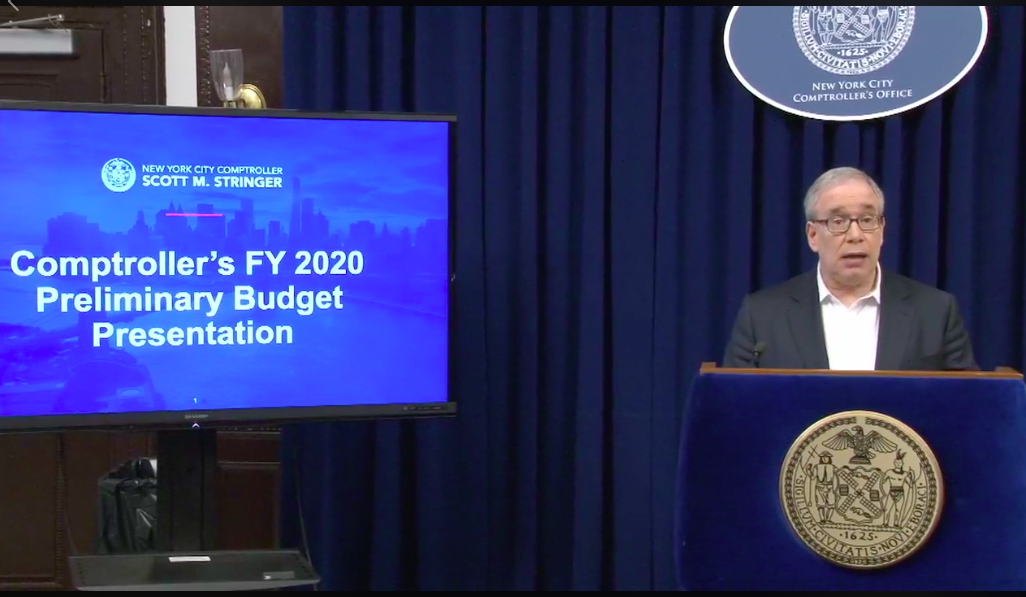 New York Comptroller Scott Stringer released on Friday his analysis of Mayor Bill de Blasio’s preliminary budget for fiscal year 2020, which begins July 1 of this year. De Blasio had presented a $92.2 billion budget plan on Feb. 7, 2019, the first step of many that will lead to a budget deal between de Blasio and the City Council. As comptroller, Stringer is tasked with budget oversight and monitoring the city’s fiscal health.

During his presentation at his Manhattan office, Stringer expressed concern over de Blasio’s use of “one-time actions” to craft the budget and said the city ought to increase its savings “cushion” to 15% of total spending to prepare for an impending economic downturn. Savings are at roughly 11%, he said. Stringer said that de Blasio’s preliminary budget, which is far from the final product, would make for spending growth of 2.1%. The city budget has grown significantly and rapidly under de Blasio.

Stringer warned the city should be ready to take a budget hit from the state and while he commended the mayor for announcing a new savings plan -- de Blasio’s version of a Program to Eliminate the Gap, or PEG -- Stringer said it is not as ambitious as it should be and city agencies need a real “scrub” of their budgets and operations to identify more opportunities for efficiency.

Stringer also announced that he has removed the Department of Education from his “agency watch list” — a tool the office introduced last year to most closely track efficiency of spending in select city agencies of concern — and the Department of Buildings has been added. DOB, he said, has hired 132 new construction inspectors — a 62% increase in spending — while construction accidents rose 252%. The other two entrants on the watch list, the Department of Correction and the agencies that perform homeless services, remain.

Stringer pointed out, as de Blasio had, that city and state tax revenues have fallen recently, raising significant red flags as budget season unfolds. The state budget appears to be on shakier ground than the city’s, and a state spending plan is due by April 1, which will influence the city budget that is decided thereafter. The comptroller said the city should prepare for the state to shift the burden.

“The first place Albany goes to save money is New York City,” said Stringer. “We are not doing enough to prepare for this scenario or this reality.”

De Blasio and Stringer both recently testified in the state capital at a joint legislative budget hearing. During his testimony, de Blasio asked legislators to help him fight back against proposed cost shifts and cuts that Governor Andrew Cuomo had outlined in his January executive budget.

Stringer said on Friday that the city’s projected accumulated surplus is $1.4 billion less than at the start of this fiscal year despite the $400 million added to it, and most of the addition to the surplus this year was due to “one-time shots,” which are resources the city only collects once and can’t count on in recurring fashion.

After nine years of surplus and economic expansion, Stringer said the city should prepare for an economic downturn as the federal tax stimulus wears off. As the unprecedented growth streak has continued, de Blasio, Stringer and others have expected tougher times year after year, but they have not yet arrived. This year could be different, depending in part on how New York taxpayers have and continue to react to the new federal tax code.

As he called for the larger budget cushion -- something Stringer has pushed for years and de Blasio has mostly dismissed, citing large reserves -- the comptroller said preparation is key in order to protect low-income families, city workers, and social services that could be the biggest victims of city cuts.

On his agency watchlist, launched last year in an effort to reform spending at certain city agencies, Stringer congratulated the Department of Education for making its way off after reducing travel costs and consolidating redundant programs. He said DOE showed conclusive evidence of more efficient spending.

“We needed to hire inspectors, but they must be deployed in a way that gets results, and that's not what we are seeing here, so they have joined the watchlist,” he said.

The Department of Correction and five different city agencies that spend on homelessness remain on the watchlist. City spending on homelessness has increased from $1.3 billion in fiscal year 2014 to a projected $2.9 billion in fiscal year 2020, with the majority of spending going to shelters and other funding to prevention and services, with little impact in reducing the city’s homeless population — with 60,620 adults and children living in shelters as of Thursday, according to the city, and 580,000 New Yorkers living rent-burdened and on the edge of homelessness.

“This is really a crisis that is not being managed,” said Stringer. “There’s a lot of contributing factors.”

De Blasio has repeatedly said that he has not made the progress he’d hoped on homelessness but has also made the case that his administration’s efforts have stopped the problem from getting much worse, and that the city has finally stabilized the decades-long growth in homelessness, including through a significant increase in anti-eviction programs as well as rent vouchers for those leaving shelter.

Correction remains on the watch list after spending has nearly doubled since fiscal year 2014, partly in an effort to decrease violence on Rikers Island, though that violence has increased while the overall jail population has decreased significantly. According to the comptroller, the city currently spends $300,000 per detainee every year, up from $117,000 in 2008, and in the same period the number of violent incidents has more than tripled to 1,354 per 1,000 population. Meanwhile the number of detainees has decreased by 36%.

The comptroller also announced Friday that he has sent a letter to de Blasio’s office asking for a full financial accounting for ThriveNYC, the mental health program run by First Lady Chirlane McCray that has recently come under media and City Council scrutiny. Stringer expressed concerns about the transparency and effectiveness of the funding, and said he wants to determine where exactly the $250 million in annual spending is going.