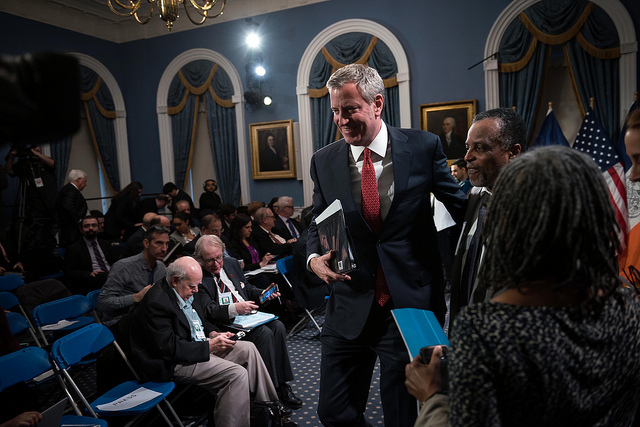 Mayor Bill de Blasio received a warmer reception in Albany on Monday than he has in past years as he testified before the state Legislature on Governor Andrew Cuomo’s 2020 executive budget proposal and how it would affect New York City. Over the course of more than two hours, the mayor argued for more education funding, emphasized the need for a comprehensive revenue plan for the MTA, enlisted legislators to help fend off proposed funding cuts and costs shifts, and defended his administration’s work on multiple fronts.

In prior appearances before the Legislature, de Blasio has faced the ire of Republicans who controlled the state Senate and have used the annual budget hearing to criticize the mayor’s policies and management of the city. But with Democrats now in control of both legislative chambers, the mayor found himself largely in agreement with lawmakers and their priorities on everything from school aid and transit funding to criminal justice reform, rent regulation and marijuana legalization.

He called on the Legislature to give the city design-build authority for infrastructure projects, pushed for the expansion of a speed camera and red light camera program in the city, asked for repeal of Section 50-a of the state civil rights law, which prevents disclosure of police officer disciplinary records, and advocated for a commercial vacancy tax to fight a crisis of vacant storefronts in the city.

De Blasio appealed to the Legislature to aid New York City in avoiding what he said is nearly $600 million in proposed cuts and cost shifts included in the governor’s budget. He reiterated the city’s slightly more rocky budgetary prospects that he raised in his own $92.2 billion preliminary budget proposal last week, where he noted that his administration is implementing a PEG (program to eliminate the gap) for the first time, with the goal of $750 million in total savings across agencies by the time the mayor releases his own executive budget plan in April (at which point he’ll also have to factor in the final state budget, which is due by April 1). City agency cutbacks, he warned, would be exacerbated if the governor’s budget passes in its current form.

The mayor blamed nearly half the Cuomo “cuts” on education funding. Those include a $148 million shortfall in mandated spending on charter schools and special education services and a newly proposed school funding formula that de Blasio said would create a “winners and losers situation” by shifting existing funding away from needy schools. “Although I am certain the proposal’s well-intended, there are real problems with it,” he said under questioning from Assemblymember Ed Braunstein. The governor’s office has disputed de Blasio’s characterizations of “cuts,” noting that some of the mayor’s assessment is based on faulty expectations by the city.

De Blasio also insisted, as he has often done, that the state should provide full funding under the Campaign for Fiscal Equity decision, which would mean about $1.2 billion in additional fair student funding for the city. “We should all be outraged that something that was decided by our highest court to help our children….somehow has not been brought to full fruition,” he later said. Again on this topic, Cuomo has disagreed with the mayor’s interpretation, which is shared by many Democratic officials, with the governor saying that the Campaign for Fiscal Equity has been paid off and is a thing of the past.

De Blasio did commend the governor for backing a three-year extension of mayoral control of city schools, which Republicans often used as a cudgel against the mayor in order to extract concessions from the city. At Monday’s hearing, the mayor was able to tout his administration’s success with little pushback, pointing to record-high graduation rates.

Senator Robert Jackson, however, did prod the mayor for more accountability within the system. “I don’t believe in control...I believe in authority with oversight at an appropriate level,” Jackson said.

De Blasio was willing to concede, “The phrase might be better called mayoral accountability.” At various points, he said that his administration is seeking greater input from parents on issues such as school closures and consolidation, though it could always do better. And he also defended his authority to appoint the schools chancellor through a discretionary process. A nationwide public process would undermine the city’s ability to hire top-notch educators, he said. “The power of [mayoral control] is, everyone here and all the parents of New York City get to hold me accountable,” he said. “That was not true in the past.”

Legislators focused a significant amount of time on the MTA and proposals to find sustainable sources of revenue for the beleaguered authority, responsible for the subways and buses, while making its operations more efficient. Cuomo has proposed a congestion pricing system with some details left undetermined, but that would, among other things, give the Triboro Bridge and Tunnel Authority control over city streets. And he has said the city should split halfway any remaining MTA capital shortfall after congestion pricing revenue is counted. The governor has also been railing against the MTA structure and leadership, who he appointed, and has been arguing for greater control of the agency, which he already effectively controls.

De Blasio has rejected congestion pricing as a silver bullet to solve the MTA’s woes and has said he would prefer a millionaire’s tax to raise the requisite funds for subways and buses. He repeated that argument at the hearing and said the MTA would need a “multi-element” solution that includes several different long-term streams of revenue, including perhaps a mansion tax, an internet sales tax, and revenue from legalization of recreational marijuana use, and a lockbox to ensure congestion pricing revenue is not diverted away from the MTA. Splitting capital costs with the state, he said, would be overly burdensome on the city’s already massive ten-year capital plan, which hit $100 billion for the first time when he released it last week.

He also insisted he could only support a congestion pricing plan that had “hardship exemptions”, which went down well with some legislators but not others. For instance, Senator Jim Gaughran, a Long Island Democrat, agreed, saying he hadn’t seen a feasible proposal yet. He suggested a regional program that could also take into account commuters who use the Long Island Rail Road and bus systems, and a carve out for small businesses. Democratic Assemblymember Bobby Carroll of Brooklyn, on the other hand, said the mayor’s insistence on a progressive congestion pricing proposal seemed “disingenuous” since various carve outs would render the program insufficient.

“I think it’s a balance point,” de Blasio responded. “I think there’s a way to figure out what is a fair hardship exemption and what is not, what does it do to our revenue and what revenue we need.”

And though de Blasio has feuded with Cuomo over blame for the MTA’s failings, he generally supported the concept of giving more control to the governor. “I liken it to mayoral accountability for schools,” he said.

De Blasio also found himself defending his role in the deal to bring an Amazon campus and an estimated 25,000 to 40,000 jobs to Queens, which would give the tech giant $3 billion in tax incentives and grants. To persuade Amazon, the mayor and governor struck an agreement to circumvent the local City Council-led land use process, drawing widespread criticism.

De Blasio insisted on Monday that the $3 billion in incentives the company will receive is out of the city’s control -- most of the tax breaks are as-of-right incentives that Amazon would receive like any other company based on its location and job-creation, and $500 million of it is coming from the state in a capital grant. And he also revealed that he did not negotiate with the company to ensure neutrality if its workers attempt to unionize. When asked by Senator Jessica Ramos, a former de Blasio aide, he said he only insisted that the campus be built by union labor and that building services jobs should go to union workers. De Blasio has repeatedly said that he will continue to put pressure on Amazon related to its approach to employee unionization, and that the larger New York City pro-union environment will also play a role.

In back-and-forth with lawmakers, de Blasio also made promises, some concrete and some speculative. He said that a commission looking at the city’s property tax system would release its recommendations this year. He said the city could shave years off the Rikers Island jail closure plan if a variety of criminal justice reforms are passed by the state. He said he would work with legislators to introduce a commercial vacancy tax bill in the coming weeks. And he promised to invest in improved bus service in the city even if congestion pricing does not come to pass.

Of course, there were moments when de Blasio also pushed back. Senator John Liu, a Queens Democrat and 2013 primary opponent, pushed the mayor on his “seemingly magical solution” to expand healthcare access to 600,000 uninsured New Yorkers at an eventual cost of $100 million annually. Liu wondered whether that would mean the state could pass a single-payer program that doesn’t include New York City. “I would like to say yes to that but I can’t,” de Blasio responded, noting that single-payer healthcare would be a better option.

Assemblymember Nicole Malliotakis, a Republican who ran against de Blasio in 2017, noted that the mayor was raising alarms about budget shortfalls in the city while also increasing spending by $3 billion. “If we are anticipating all these problems with less revenue coming into the city, why are you continuing to increase the budget dramatically?” she wondered. She also asked the mayor to cap increases of the city’s property tax levy, one of the few tax burdens under the city’s control.

De Blasio did agree that the city needs a “more equitable solution” to property taxes though he disagreed that the city should cap the levy. He also defended the city’s budget more broadly, emphasizing that much of the increased spending has gone to pay increases for the municipal workforce in new labor agreements reached under his administration which had lapsed for years.

The state Legislature will continue budget hearings over the next few weeks before each house -- or perhaps both houses together -- release responses to the governor’s proposal. First, Cuomo will release 30-day amendments to his budget plan. Negotiations will heat up in March as the April 1 state budget deadline looms.

[Read: 9 Key Takeaways for New York City from Cuomo's State of the State and Budget]