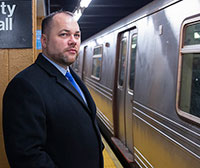 New York City Council Speaker Corey Johnson has proposed a city takeover of the subways, part of a lengthy and ambitious new transit plan he announced at this first State of the City speech. The hosts discuss Johnson's proposals and some other recent New York political news, and get a surprise call-in from the Speaker himself.