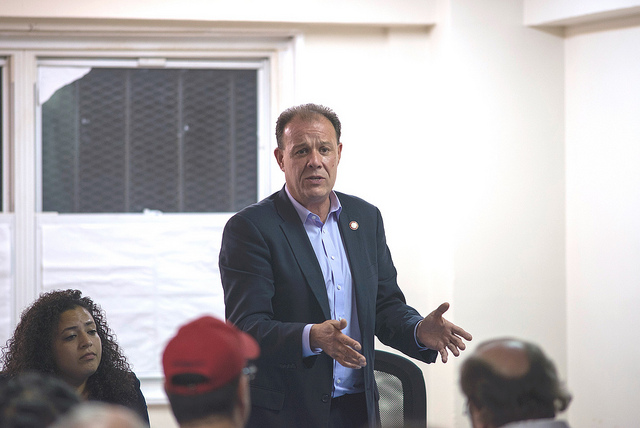 It was a unique problem for the Council member of the tight-knit City Island community of the Bronx, where he is popular. A constituent asked Gjonaj why a notorious heroin dealer was allowed to live and sell drugs in an apartment building previously managed by Gjonaj and owned by Gjonaj’s family for years.

Gjonaj, a Democrat, called the question the “dirtiest thing” he had ever been asked and said laws exist that “protect criminals” by preventing eviction.

“I know the law when it comes to real estate. And it’s the progressives who don’t allow me to evict a criminal,” said Gjonaj, to cheers.

He later said “no law would allow me to evict” the dealer and that he threatened him.

“I promised him that if I saw him dealing, that I would be his problem. I took matters into my own hands when I was a civilian,” Gjonaj recounted at the April 2018 meeting (which has not been reported on before), a statement his office is now contradicting, claiming Gjonaj had no knowledge of the serious drug-dealing going on at the property.

The drug dealer in question was Frankie Beqiraj, who was sentenced to 25 years in federal prison in December 2018 for distributing heroin, cocaine, oxycodone, and Xanax throughout City Island. He caused the direct overdose deaths of at least four residents in the area, according to a federal sentencing memo.

Federal prosecutors said “that Beqiraj used his home as the center of his drug operation...confirmed by the evidence recovered from his home by law enforcement.”

This evidence included heroin, oxycodone, cocaine, marijuana, scales for drug measurement, plastic bags for packaging the narcotics, and a safe designed for keeping a handgun. Prosecutors said Beqiraj not only sold heroin to customers in his home but also sold to employees who would later deal on his behalf.

Beqiraj lived at 30 Pilot Street, otherwise known as Pickwick Terrace, a property that Mark Gjonaj managed for years until 2016. Gjonaj was a member of the New York State Assembly from 2012 through 2017, the year he won a seat in the City Council, where he has served since January 2018. The property is currently owned by Gjonaj family members, namely Kramluap Realty LLC (Kramluap is Mark and Paul, the name of Gjonaj’s brother and previous business partner, spelled backwards).

It shares the business address of a number of companies that Council Member Gjonaj currently receives passive income from (the City Council banned members from earning most types of active income in 2016, which, upon his joining the Council, impacted Gjonaj more than most, if not all, members).

Contradicting what Mark Gjonaj said to City Island constituents in April 2018, earlier this month and nearly a year later, a spokesperson for Gjonaj denied that the Council member ever knew there was drug dealing going on at 30 Pilot Street when he managed the building. He also said Gjonaj never tried to evict Beqiraj because there was no means to do so.

In a statement to Gotham Gazette, the spokesperson for Council Member Gjonaj defended his role:

“Mr. Beqiraj, who originally moved into the building as a child with his family, live [sic] in one of the buildings owned by the councilman’s family. Mr. Beqiraj was convicted in part due to the video evidence provided by the managing company and the councilman was happy to see that justice was served. This was a tragedy that impacted not only the victims but the families that were forced to mourn their loss. It’s a shame that these families now have to relive these painful memories because someone has chosen to politicize their tragedy in an effort to score a political point. We understand that politics can be a rough arena but there are some issues that no decent person should attempt to capitalize on. This is one of those times,” said Reginald Johnson, chief of staff for Council Member Gjonaj.

Beqiraj had been arrested several times prior to his 2018 conviction and served three years in prison before returning to 30 Pilot Street in 2013. Federal prosecutors allege that in July 2016, Beqiraj assumed “his role as the leader of a drug enterprise that provided one-stop shopping for addicts throughout the small Bronx community of City Island.” He was arrested in early 2017.

Gjonaj’s management company provided video evidence of Beqiraj to federal prosecutors, aiding in his conviction. A spokesperson for Gjonaj said Beqiraj was not convicted of anything and, therefore, there was no recourse to evict him. The spokesperson also said tenant laws would have protected Beqiraj. This runs counter to Beqiraj’s arrest record prior to his federal sentencing and New York state realty law’s threshold for evicting a tenant engaging in “illegal business.”

It is not the first time Gjonaj’s relationships with his past and current businesses have come up as questions during his career as a legislator.

While Gjonaj served in the Assembly, he spent a large sum of campaign funds at his brother’s restaurant and helped host an ethically-mired Albanian Flag Day party also involving his brother’s business. Gjonaj is the first Albanian-American elected to the City Council.

After entering the City Council, Gjonaj ran into trouble for his past business relationship with a major Bronx trash hauler responsible for worker deaths and his legislative and public relations efforts to help them. The company, Sanitation Salvage, whose owners have donated heavily to Gjonaj's campaigns, has been put out of business by the city.

And, early this year, Gjonaj was reportedly under examination from the City Council for his use of taxpayer funds to pay for services from companies whose owners are campaign donors and a company sharing a business address with his own businesses.