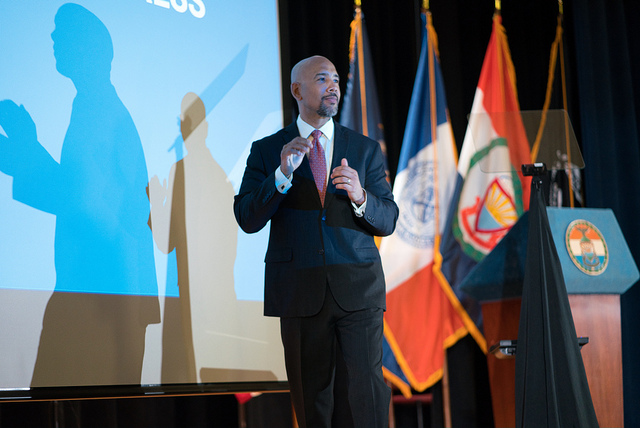 Bronx Borough President Ruben Diaz Jr. is in favor of closing the jails on Rikers Island but vehemently opposed to the joint de Blasio administration-City Council plan for a new jail site in the Bronx. Diaz Jr. isn’t against a new jail in his borough. Instead, he wants the city to use a different location, closer to the courthouse where defendants must appear, but that city officials say is less workable than their chosen site.

Diaz Jr. made his case during a recent appearance on the Max & Murphy show on WBAI radio just after the jail plan begin to move through the city’s official land use review process, known as ULURP, in which the borough president will have a formal but not binding say. In a unique twist, the city is also moving four jail projects -- one for each borough other than Staten Island -- through ULURP at the same time, which Diaz Jr. says “sets a bad precedent.”

During the interview, Diaz Jr. also addressed admissions to the city’s specialized high schools and several other topics, while also giving, when asked, an early version of his 2021 mayoral pitch to voters. Diaz Jr. has said he plans to run for mayor in the next election, when Mayor Bill de Blasio’s administration ends due to term-limits––part of what is likely to be a fairly crowded field of Democrats.

The city’s current plan to shutter Rikers Island jails includes building a new jail on an empty NYPD tow pound in Port Morris, a neighborhood in the South Bronx, but Diaz Jr. protests the lack of input from Bronx residents when the city decided on the plan. He said residents of Kew Gardens in Queens and Chinatown in Manhattan, where other jails are planned, have also protested the lack of community input. In both Brooklyn and Manhattan currently used jails will expand under the city’s plan.

As an alternative to the tow pound, Diaz Jr. pointed to lots on 161st Street in the Bronx, where the Bronx Supreme Court and family court are located. Criminal justice reformers advocate for close proximity between jails and courthouses and public transportation, which can alleviate detention time and ease access for families and defense attorneys. This level of access has posed a challenge on Rikers Island, which is considerably difficult to reach.

In response to Diaz Jr.’s plan, a de Blasio spokesperson said that a jail demands more space than is available on 161st Street, including some owned by the state. “What data do they have? They haven’t even examined the site,” Diaz Jr. countered. “Some of that space belongs to the state––and maybe they don’t want to get into it with the governor, because the mayor and the governor don’t get along,” he said, referring to the notoriously contentious relationship between Governor Andrew Cuomo and Mayor Bill de Blasio. But, Diaz Jr. said he already secured a commitment from the state -- he’s close with Governor Andrew Cuomo -- to relinquish the state property at his preferred site.

Asked about the disconnect between his rhetoric and the views of City Council Member Diana Ayala––who represents parts of northern Manhattan and the South Bronx, including the neighborhood with the tow pound in question, and has voiced her support for the new plan––Diaz Jr. said, “Respectfully, she doesn’t live in the Bronx part of the district.”

As conversation switched gears to the broader role of a borough president, Diaz Jr. said his team was putting forth recommendations to bolster the office’s legislative, voting, and budgetary power to the 2019 Charter Revision Commission, particularly concerning land use. His comments came two days after the charter revision commission’s final “expert” hearing, which focused on the role of borough presidents, during which several experts agreed that a revised charter should strengthen borough presidents’ legislative authority (some of the panel’s experts were former borough presidents themselves) but not make drastic changes to the limited powers of the position.

Diaz Jr. said he and his appointee to the commission, James Vacca, a former City Council Member from the Bronx, are still brainstorming proposals, but promised to publicize suggested reforms once they have formalized them. During the commission hearing on borough president powers, Vacca did not pose any questions to the expert panels about the position. Time is running thin for Diaz Jr. to make his recommendations and preferences for charter reform known.

The hosts also asked Diaz Jr. about one of the other hot recent political issues, that of standardized testing for the city’s highly-segregated specialized public schools, two of which are located in the Bronx. Currently, admission to eight of the nine specialized schools is based on a single test: the SHSAT (Laguardia High School is a specialized performing arts school). Mayor de Blasio is seeking to scrap the test and move to multi-measures and a system whereby the top 7% of each middle school graduating class has a seat at a specialized school, but received significant blowback from the city’s Asian-American community, which is significantly overrepresented in the schools relative to broader city population, while black and Hispanic communities are severely underrepresented.

“I agree that the status quo is not working. When you have slightly less than 11 percent of all seats at the eight specialized high schools offered to black and Latino students this year, there’s something fundamentally wrong with what we’re doing,” said Diaz Jr.

He suggested a more holistic admissions process, akin to Ivy League universities, that considers students’ GPA and extracurricular activities. “We should not be putting one community against the other. And this is where I disagree with the mayor and his rollout,” Diaz Jr. said. Last summer, when de Blasio announced his plan, Diaz Jr. released a statement calling it a “welcome step forward for fairness and equity in the public education system.” He has since changed his tune.

“What we need is to increase the amount of seats,” he said on Max & Murphy. “Only three of the high schools are codified by state law. The other five were created and we need to just create more if we have to.” He also called for more access to gifted and talented programs for students in every community.

Diaz Jr. also discussed the Jerome Avenue rezoning in the Bronx. The project, launched last March, promised to create new retail opportunities and thousands of new affordable housing units while protecting the tenants who were already there along the way, and making investments in the surrounding community as new population density was welcomed in.

Asked for his assessment of the initial year after the rezoning passed, Diaz Jr. said he was working with tenants rights organizations like CASA to prevent displacement (CASA leader Carmen Vega-Rivera recently told the charter revision commission she felt that the city’s outreach has been insufficient), but on the project’s overall effectiveness and the city’s ability to keep its promises, Diaz Jr. said, “The jury’s still out.”

Lastly, in light of Diaz Jr.’s less than covert plans to run for mayor, he spoke about his vision for New York City, when asked for his initial pitch to voters ahead of the 2021 election, which is expected to feature Brooklyn Borough President Eric Adams, Comptroller Scott Stringer, City Council Speaker Corey Johnson, Diaz Jr., and perhaps others.

“We’re the best city on the planet. And yet, you have so many different communities in all the different boroughs who don’t feel they’re benefitting from the progress they see throughout the city,” Diaz Jr. said, in part, highlighting his efforts to bring jobs and housing to the Bronx, which he called “one of, if not the most, challenged borough in the city.”

Earlier this month, Diaz Jr. released his 2018 Bronx Annual Development Report, boasting high levels of investment and development in the borough, which he highlighted during his ninth State of the Borough address.

“As we speak of equity, that’s going to be the message here," Diaz Jr. said on Max & Murphy. "This is a city where we can provide a better future not just for some, but for all. And we can do this in a practical, pragmatic, progressive way.”