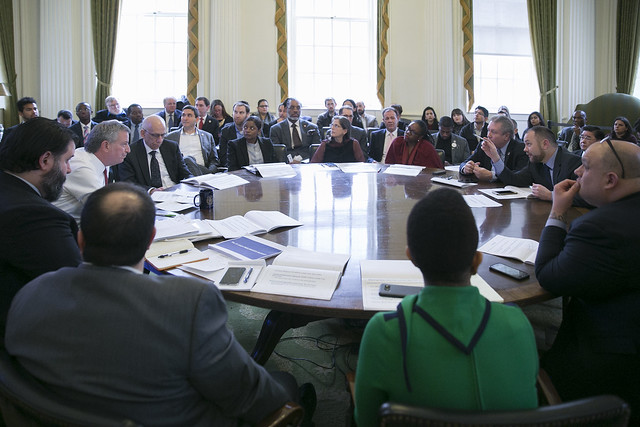 The Mayor and the Council in a budget briefing (photo: William Alatriste/City Council)

The City Council on Tuesday released its response to Mayor Bill de Blasio’s fiscal year 2020 preliminary budget, calling its own outline “a fiscally responsible plan that safeguards the city’s financial future and secures the city’s social safety net for New Yorkers.” Council Speaker Corey Johnson and Council members are calling for additional reserves and targeted investments, while also saying they’ve identified roughly $1 billion in savings that can be achieved between the end of the current fiscal year and the next one, which begins July 1.

The Council spent most of March focused on the mayor’s $92.2 billion preliminary budget plan and the separate capital budget, holding over 30 hearings, at which leaders of 55 city agencies gave hundreds of hours of public testimony, according to the Council. The formal preliminary budget response is the culmination of this stage of the budget process -- and it comes just after the adoption of the new state budget, which significantly impacts how the city plans its spending. The Council will next move into negotiations with the mayor ahead of the release of his executive budget later this month, which will trigger another round of Council hearings, more negotiations, and a deal expected sometime in June.

Appearing on Wednesday’s Max & Murphy show on WBAI radio, Johnson highlighted three areas of the response: growing the city’s reserves, strengthening the social safety net, and achieving pay parity for some sectors of the city workforce.

First, the Council is requesting $250 million be added to the budget reserves, noting that the Council was able to secure $225 million during the last budget negotiations. Johnson said the city economy continues to look strong, but that a recession could be on the horizon. “We don’t entirely agree with the Office of Management and Budget” on revenue forecasts, he said, indicating that the mayoral administration’s budget office is being typically conservative in its estimates. Johnson said numbers over the next two months, as more tax receipts come in, will inform what will happen in the final budget.

The city has billions in reserves but Johnson is worried that given the size of the city budget it may not be enough to weather a recession. Still, he did not indicate too much concern about the budget’s continued growth under de Blasio and the Council, with another $3 billion or so in spending expected for the coming fiscal year about the current one.

Third, as he said multiple times throughout the preliminary budget hearings, Johnson reiterated on Max & Murphy that “we have to strengthen the social safety net in this city.” Within the Council’s budget response there are several proposals to increase funding for programs to help New Yorkers in need.

Programs that the Council wants to better support include the New York Immigrant Family Unit, senior meals, childcare services at CUNY, Fair Futures for those leaving foster care, and social workers for families with children at each of the 57 Department of Homeless Services-contracted hotels.

The Council is also requesting for $580 million more in education funding, which will go to fair student funding, an expansion of the Comprehensive After School System (COMPASS), security cameras in all schools, and renovations for school bathrooms.

The response also calls for $40 million to fund the city’s efforts surrounding the 2020 Census, an expansion of pre-arraignment programming, a funding increase for the NYPD Collision Investigations Unit, expansion of evidence collections teams, the opening of a community justice center in Far Rockaway, and the prioritization of the Department of Homeless Services Peace Officers for crisis intervention training.

In addition to Mayor de Blasio’s $750 million PEG (Program to Eliminate the Gap), which is set to find that amount of savings across city agencies in time for the executive budget, the Council is also recommending an additional $972 million in savings over two fiscal years. These savings come from agency efficiencies, additional revenues, and expense budget re-estimates, according to the Council’s budget response.

The Council found several ways to make city agencies more fiscally efficient. It wants the current partial hiring freeze expanded to include 870 additional vacancies that it says should be frozen for fiscal year 2020 or eliminated altogether as planned spending.

The Council also wants a $50 million cut to the planned spending on the ThriveNYC initiative, which is estimated at $250 million next year. ThriveNYC, First Lady Chirlane McCray’s signature initiative, has recently come under increased scrutiny for unclear benchmarks and a lack of transparency and accountability. The initiative was recently criticized by several Council members at a March 26 hearing and has been the subject of a great deal of press examination. The Council writes that a $200 million allocation for next fiscal year would better match the plan’s actual growth over the last few years as it has ramped up, consistently spending less than budgeted.

“However, new units of appropriation will not solve the problem of being unable to clearly track multi-agency initiatives or offices,” the response says. “For programs such as ThriveNYC, Universal Pre-K, and the Office to End Domestic and Gender-Based Violence, the Administration must commit to supplemental reporting with each financial plan and consistent budget labeling to show all relevant budgetary information for these wide-ranging programs. In addition, the Council calls on the Administration to provide additional reporting on particularly opaque parts of the budget, such as Department of Homeless Services shelter spending and NYC Ferry, which is operated by the Economic Development Corporation.”

Additionally, the Council believes that there are several revenue streams that the preliminary budget does not take into account, such as additional state and federal funding for the Department of Social Services. A planned expansion of the city’s school-zone speed camera program could also generate up to $30 million in additional revenue, the Council estimates. The Council also believes that the mayor’s budget estimates for various fines and fees should be revised upward, and also recommends re-estimates to the costs of various city obligations, such as interest costs on the city’s debt service and holiday pay at some agencies.

On the capital side, the Council budget response calls for a “sizeable investment” to increase bus lanes, bike lanes, and pedestrian areas. These investments would be part of a master plan for New York City streets, which Johnson said he will introduce legislation requiring “in the next month or so.” That master plan is part of Johnson’s proposal for improving the city’s transportation and livability, as he laid out in his State of the City speech last month. “Transit is the lifeblood of New York City,” Johnson said on Max & Murphy.

The Council’s response calls for installation of 50 miles of new bike lanes and 30 miles of new bus lanes per year. The Council is also requesting a doubling of the Department of Transportation’s Pedestrian Plaza program.

Raul Contreras, a deputy press secretary for Mayor de Blasio, said in a statement that “we look forward to working with the City Council throughout the budget process to build on our success, including collaborating on ways we can grow our historic reserves. We also look forward to evaluating new needs while being mindful of the City’s mandatory savings targets and any economic uncertainty the City faces.”