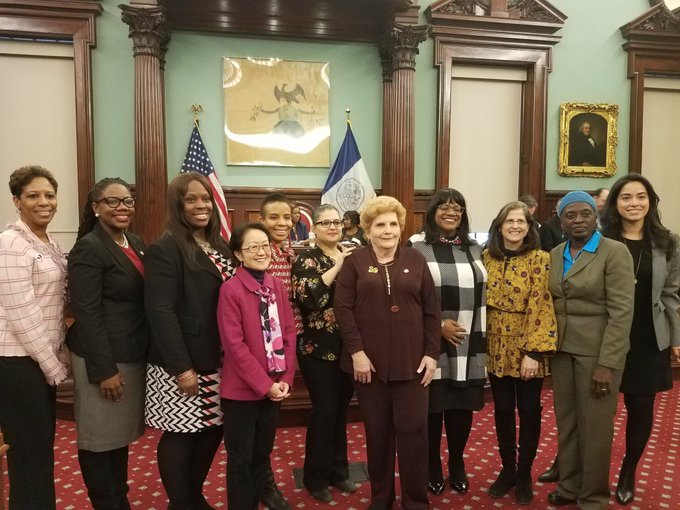 In 2009, there were 18 women in the 51-seat New York City Council. A decade later, after resignations and members term-limited out of office, that number has dropped to just 11, most of whom are serving their second and final term. It’s a paltry ratio for a legislative body that prides itself on inclusion and diversity, and one that the “21 in ‘21” initiative is striving to address.

The nonprofit organization is building a network to boost women seeking local elected office and could make its first mark in the city’s political scene next month in a special election for the District 45 Council seat in Brooklyn, recently vacated by Public Advocate Jumaane Williams.

The 21 in ‘21 initiative was launched in 2017 by then-City Council Speaker Melissa Mark-Viverito, Council Member Margaret Chin, then-Council Member Elizabeth Crowley (she lost her seat later that year), and Effective NY, an advocacy group. The goal is to elect at least 21 women to the City Council in the next municipal elections in 2021, when at least three dozen Council seats will be up for grabs, along with the five borough president posts and all three citywide positions of mayor, comptroller, and public advocate.

The group is set to make its first official endorsement of a candidate in the District 45 special election.

“If women ran with the same frequency as men, we would have equal representation, not only in the City Council, [but] all over state legislatures and in the federal government,” Crowley, the chair of 21 in ‘21, said at a meeting of its members at the Jamaica Center for Arts and Learning in Queens on Monday. The initiative was buoyed that day by a show of support from U.S. Rep. Gregory Meeks, who, as the new chair of the Queens County Democratic Committee, will play a powerful role in 2021 when 11 Council seats will be open in that borough alone.

“We’ve got work to do. Instead of us progressing, we went back. Instead of us continuing to lead, we’ve lost our numbers,” Meeks said of the diminishing number of women in the Council. It’s not immediately clear what his actual commitment to the 21 in ‘21 effort is, however.

The District 45 special election on May 14 will be the 21 in ‘21 initiative’s first outright foray into elections as the organization plans to endorse one of the five women running for the seat -- Monique Chandler-Waterman, Jovia Radix, Farah Louis, Xamayla Rose, and Adina Sash -- out of nearly a dozen candidates. The organization will hold a candidate screening on April 29 where its 235 members will have the chance to assess the five candidates before recommending an endorsement.

“This is kind of going to be a pilot, test run for what’s going to happen in 2021,” said Moira McDermott, executive director of the organization, in a phone interview. “We’re looking to make sure that they’ll commit to helping the mission in the Council and that they’ll commit to mentoring women to run...or in general to prepare, and having more women on their staff and helping women into leadership positions on the Council.”

Till now, the organization has been building its base, recruiting would-be candidates and holding trainings on navigating the political process, including how to conduct community outreach and how to raise money for a campaign. Meeks’ support in Queens is also helping build momentum that could convince other elected officials and county Democratic organizations to support their efforts, McDermott said.

“Our goal isn’t necessarily accepting all the endorsed county candidates but it’s a matter of working together to make sure that any women they have in the pipeline, to bring them into the organization and...encouraging them to work with the women that we have in our pipeline,” she said. “So it’s a joint effort to have the most viable and qualified candidates.”

“We feel incredibly optimistic,” said Crowley, in a subsequent phone interview, confident that District 45 will elect a woman to the Council next month. “We want to make sure that candidates have been involved in their communities, that they understand how it takes a full investment of oneself to be a Council member, and certainly to have the opportunity to be a successful candidate,” Crowley added.

She also emphasized the grassroots strength of the organization, which she said will boost its chosen candidates and sets it apart from other political action organizations. “It’s not like we give a check and walk away. We’re engaging other New Yorkers to believe in you and believe in your candidacy,” she added. Crowley herself doesn’t intend to run for the City Council in 2021, she said, but she wouldn’t say if she’d run for higher office. There may soon be a special election for Queens Borough President if the current officeholder, Melinda Katz, wins this year’s District Attorney race.

21 in ‘21 is not the only organization pushing to get more women elected locally. Amplify Her, which launched with a similar mission and endorsed several successful female candidates for state Senate last year, is holding a candidate forum on April 23 for the District 45 race.

Public Advocate Williams has emphasized that his successor should be a woman and he’s already endorsed Chandler-Waterman, a close ally and former aide. “While there are many good candidates running in this race, particularly women of more color, there unfortunately is only one position available and Monique is the best person for the job,” he said in a statement.

“I like the idea of an endorsement, it does show strength, it does show unity, and it certainly shows power,” said Queens Council Member Adrienne Adams, another 21 in ‘21 supporter, in a brief interview outside City Hall. “The more we can show strength and at least try to get some balance, the better of course we’ll be as a city.”