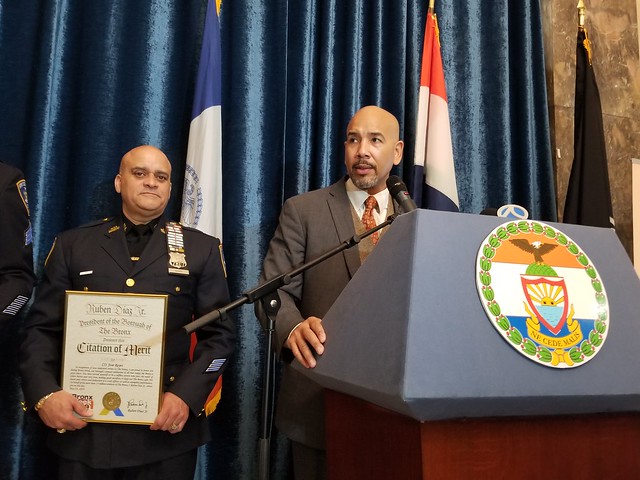 One week after the 2019 Charter Revision Commission held its final hearing in the Bronx and one day after its last borough hearing, but before the commission decides what proposals it will put before voters this fall, Bronx Borough President Ruben Diaz Jr. released his testimony to the commission on Wednesday.

While the 15-member charter commission, on which Diaz Jr. has one appointee, is considering a wide range of possible changes to city governance and elections, Diaz Jr. focused his written testimony on two crucial measures: land use and planning, and the Civilian Complaint Review Board (CCRB), which performs police oversight. He also touched on budgeting for the borough president offices. His testimony is in large part a reaction to the charter commission’s preliminary staff report, which helped narrow the commission’s likely focus areas as it headed into the now-completed final round of borough hearings and more deliberations.

Diaz Jr. is calling for more community input in land use matters, but not sweeping reforms to the process, and for more power for the CCRB, though he did not come out in favor of a popularly-elected CCRB (its members are currently appointed by several public officials). The CCRB was the focus of significant attention during the Bronx hearing of the charter commission held May 7, at which Diaz Jr. did not appear. And Diaz Jr. wants the charter to codify protections for budget allocations to the borough president offices.

While Diaz Jr. agrees with parts of the commission’s preliminary report on land use, he called the city’s current Environmental Quality Review (CEQR) process “insufficient.” He called for more comprehensive reviews of potential displacement from a proposed change in land use rules or a development project. Currently, the CEQR rules do not trigger a socioeconomic impact review until 500 residents or 100 jobs are at likely risk of displacement. Diaz Jr. called for a “lower threshold of estimated residential or commercial displacements,” but did not specify a number.

Diaz Jr. also recommended that the Charter Revision Commission “explore” a requirement for the chair of the City Planning Commission to need a two-thirds approval from the rest of the planning commission in order to be elected -- the chair is currently appointed by the mayor, while members of the commission are appointed by the mayor, public advocate, and borough presidents, and approved by the City Council. “This would give the borough presidents and public advocate a greater voice in the ULURP process, and give the chair greater accountability to all members of the City Planning Commission,” Diaz Jr.’s testimony reads.

Harkening to the contention over the proposal for a new jail in each of the four boroughs other than Staten Island that will in part make shuttering the Rikers Island jails possible, Diaz Jr. further suggested that when there’s a multi-site proposal like the jail plan, the charter “dictate unequivocally that each borough’s site must undergo a separate ULURP process, to avoid issues such as minimization of community input that is occurring in the jail siting process currently underway.”

Notably, Diaz Jr. did not call for major changes to the land use process, such as giving the borough president the power to effectively veto or restart negotiations on a development proposal. Though there appears to be a lot of discontent across the city about how land use decisions are made and a top-down approach from mayoral administrations, there has not been an apparent appetite among elected officials for sweeping alterations to ULURP.

Like land use, police accountability is a perpetually controversial topic in New York City, brought into particularly sharp relief this month given the NYPD administrative trial of Officer Daniel Pantaleo, whose chokehold led to Eric Garner’s 2014 death.

In his charter testimony, Diaz Jr. also wrote in support of the CCRB provisions included in the commission’s preliminary staff report, which advocate for increased transparency in the process, particularly in terms of the NYPD commissioner being required to explain when he or she differs with a CCRB recommendation in holding an officer accountable.

Diaz Jr.’s testimony expresses his support for guaranteed funding for the CCRB, at 1% of the annual NYPD budget, and creating a “non-binding disciplinary matrix to make discipline for violations clearer and more consistent.”

“This transparency will help restore faith in the good women and men of the NYPD who work so hard to keep us safe,” he wrote. Diaz Jr., who is overtly readying his run for mayor in the 2021 election, is among those attempting to toe the line between community activists and police reformers on one hand and a working relationship with the NYPD and its members’ labor unions on the other. It’s a balancing act that has at times confounded Mayor Bill de Blasio, among others.

Calling borough presidents' offices "conveners, constituent services providers, policy hubs, planning departments, and watchdog agencies" Diaz Jr. also called on the charter commission to protect the budgets of those offices. "Borough presidents’ budgets ought to be set with the current total allocation as a floor that shall not be decreased either in total for all borough presidents’ offices or for any individual borough president’s office. Increases should factor in any increases to the Department of City Planning’s Budget," he wrote in his testimony. Diaz Jr. said the "only exception" to that requirement would be in years when the city's financial picture includes a reduction in the expense budget.

This testimony is the first that Diaz Jr. has submitted to the charter revision commission. When asked on the Max & Murphy podcast in late March if he would submit testimony, he said, “Absolutely. I’m not here for window dressing.”

According to a Gotham Gazette review of Diaz Jr.'s recent schedules, he held an April 1 meeting with Vacca, his commission appointee.