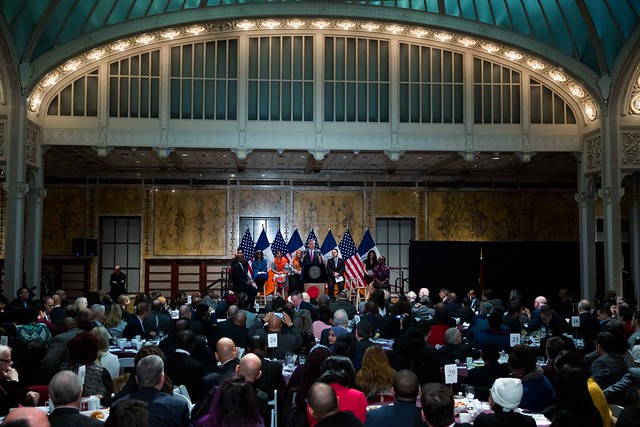 The 2019 Charter Revision Commission is set to hold one, perhaps two, public meetings to decide on what changes to city governance and elections it will propose to New Yorkers on the November ballot. The first of the potentially two meetings will be Wednesday night at City Hall, where the 15 commissioners, appointed by various local elected officials, will attempt to agree on which proposals to instruct staff to craft ballot questions around.

They are mostly working off of the “preliminary staff report,” published in late April, that narrowed the field of considerations after a series of public and private commission meetings.

But there remain several areas of disagreement, and one commissioner, former City Council Member Sal Albanese, says there’s likely to be spirited debate to hammer out the selection of the final proposals, and the commission may very well need both potential meetings, the second of which would be next week.

One proposal -- ranked-choice voting, also known as instant-runoff voting -- is very likely to make it onto the ballot, Albanese said, nearly confirming what has been apparent as the commission has done its work over the past nine months.

The 2019 Commission was the first ever created through legislation in the New York City Council. Past commissions have been convened by successive mayors, including Mayor Bill de Blasio, who empanelled his own commission in 2018. The mayor’s commission placed three proposals on last year’s November election ballot to expand the city’s campaign finance program, to impose term limits on community board members, and to create a citywide Civic Engagement Commission. All three proposals were overwhelmingly approved by voters.

The mayor’s commission received testimony broadly in support of ranked-choice voting, which allows voters to choose candidates in order of preference. If no candidate crosses a required threshold (say 40 or 50 percent) to claim victory after all ‘first preference’ votes are counted, then the candidate with the fewest first place votes is eliminated and their voters’ second choices are awarded the votes, a process repeated until a winner is crowned.

The system is meant to eliminate costly and laborious runoffs with low turnout, like the ones held for public advocate in 2009 and 2013. But the commission punted on the issue, saying it needed more time to study it, and urged any future commissions to take it up.

The Council-created commission, first spearheaded by Manhattan Borough President Gale Brewer and then-Public Advocate Letitia James, includes appointees from the mayor, Council, and borough presidents. It has worked with a longer timeline than de Blasio’s commission and has spent months delving into complicated issues around city governance, land use and planning, budgeting, police accountability, voting, campaign finance, and more. Ranked-choice voting was one of the issues to which it has paid significant attention.

When the commission released its preliminary staff report in April with detailed recommendations for possible amendments to the City Charter culled from the four focus areas that informed the commission’s public hearings: elections, governance, finance, and land use, there were also several proposals categorized as best left off of future consideration.

The 80-page report narrowed down more than 300 proposals that the commission heard, and made two dozen recommendations to the commissioners. It’s not likely that all of those proposals will advance.

At Wednesday’s hearing (and potentially the second one), the commissioners will determine what will be included in the final report as ballot questions. The commission will then pass a resolution to direct staff to prepare the report, which will then have to be approved by a majority of the commissioners.

Since the preliminary staff report was released, the commission has also held another round of public hearings, one in each borough. The Manhattan hearing focused primarily on the city’s land use process, city planning, and neighborhood rezonings. The staff report had recommended consideration of giving borough presidents and community boards a slightly greater say in how land use rezonings are approved, and had also suggested creating a more coherent process of long-term planning for the city by combining several disparate processes and planning-related documents -- but the staff did not recommend further consideration of possibly suggestion the requirement of a comprehensive city plan, something a coalition of advocates and elected officials has pushed.

The measures the staff did recommend advancing received general support from the public, members of community boards, and from elected officials. There was also testimony in support of ranked-choice voting, creating a rainy day fund for city budgeting, and creating chief diversity officers (a proposal spearheaded by Comptroller Scott Stringer) at city agencies under one new CDO in the mayor’s office.

The hearing in the Bronx also saw support for ranked-choice voting and land use reform, but most of those who testified came out to push for strengthening the Civilian Complaint Review Board, the independent city entity that monitors and investigates complaints of abuse of power and misconduct by police officers. Some called for a popularly elected CCRB, instead of the current structure where CCRB members are appointed by elected officials, mostly the mayor.

The commission is set to meet Wednesday, JUne 12, to debate the final proposals, and has tentatively planned to hold another hearing on June 18. JoAnne Wasserman, a spokesperson for the commission, said the chair, Gail Benjamin, was unlikely to comment prior to the Wednesday meeting.

“I’m expecting two meetings because I believe that there’ll be extensive debate on a number of issues,” said Albanese in a phone interview, arguing that two hearings would also allow the public to gain a better understanding of how the commissioners will arrive at their final vote.

“I think one of the areas that we seem to have general consensus on is ranked-choice voting,” he added. Though he said there might be debate on how it should be implemented -- whether it applies to primary and special elections or general elections as well, and for which offices -- he was certain that it would be included in some form as a ballot question.

Alex Camarda, senior policy advisor at Reinvent Albany, a good government group, was glad the commission appears to be moving ahead on ranked-choice voting. “Establishing ranked-choice voting for primary and special elections could be very significant,” he said in a brief phone interview, “if it was done for all offices.”

The commission may also look at additional ballot proposals that weren’t included in the preliminary staff proposals.

“The report that the staff put together is not necessarily going to be abided by,” said Albanese, the commission appointee of Brooklyn Borough President Eric Adams in part for Albanese’s campaign finance reform advocacy, noting that the preliminary staff report is not “the final word” and the commissioners have the authority to go beyond it. For his turn, he intends to continue pushing for a five-year ban on lobbying for all former elected officials and for “democracy vouchers,” which would transform the city’s campaign finance program by giving all New Yorkers an equitable amount of money to donate to campaigns.

He said, though, that the elected CCRB proposal seems certain to fail. “It’s not that it’s controversial, I think a lot of people think it’s just not workable,” he said. “I could be wrong but that’s the consensus that I hear across my conversations with other commissioners.”