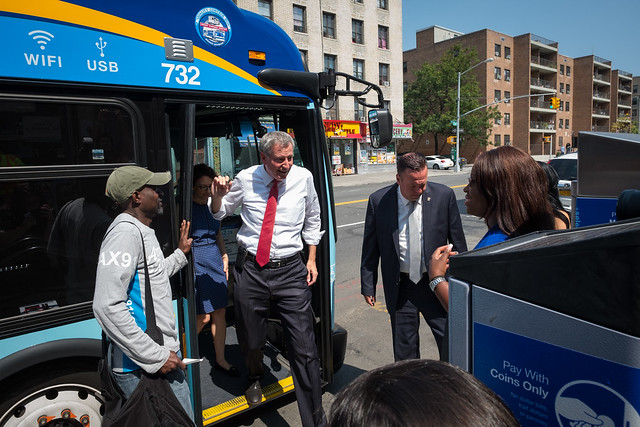 That consensus was reached in recent years as bus speeds slowed to a crawl and the system hemorrhaged ridership. Various advocacy groups and elected officials have put forth studies and plans, and the entities with actual control -- the state-run Metropolitan Transit Authority (MTA) and the New York City Mayor’s Office -- have taken steps toward improving the situation, though many questions around commitment and implementation remain.

Even as the city boasts 2.5 times more bus riders than any of its counterparts across the country, its buses are the slowest in the United States, according to data from the mayor’s office. In the past four years, city bus ridership has decreased by 13 percent; from an annual total ridership of 677,569,432 in 2013 to 602,620,356 in 2017. Buses average a speed of just 8 miles per hour, with speeds at about the pace of a brisk walk in some of the city’s busiest corridors. The slowest city bus route, the M42, runs across Manhattan’s 42nd Street at an average speed of just 3.9 miles per hour, according to data from the city comptroller’s office.

Fixing the buses is a transit issue and a socioeconomic issue; 75 percent of bus riders are people of color, and 50 percent are immigrants, said Danny Pearlstein, policy and communications director for Riders Alliance, an advocacy group.

“Better bus service is really about uplifting the portions of our population that need it the most,” Pearlstein said.

Both the MTA, which has say over bus routes and personnel, and the office of Mayor Bill de Blasio, which controls the city Department of Transportation and use of the roadways, street designs, and more, have been criticized for doing little to attend to the buses as ridership plummeted. Asleep at the wheel, both have recently reacted to the bus crisis.

To try to fix the bus system and reverse the ridership trend, the MTA and the Mayor’s Office have implemented or announced, at times with partners, a series of plans and laws to improve bus speeds. They’ve recently been aided by legislation passed by the state Legislature to allow for mounted bus cameras that can ticket drivers parked in bus lanes.

According to experts, including advocates and elected and appointed government officials, the keys to speeding up city buses include: improving Select Bus Service, which is a form of express bus; increasing the number of buses with all-door boarding; eliminating inefficient bus stops; implementing transit signal priority (TSP) so buses can move through traffic lights more quickly; creating more bus-only lanes; and enforcing bus lanes. Much of this work has started or been promised, but results are few given that most responses to the crisis are recent.

MTA and the Bus Route Redesigns
This year, the MTA began a bus route redesign effort as part of a plan from Andy Byford, president of MTA New York City Transit, called Fast Forward, which aims to modernize New York City’s subways and buses. While the full go-ahead, including funding, for Fast Forward is still in limbo, moving ahead with bus route redesigns is among the lesser expensive overhauls. New bus routes are essential, Byford and many others agree, to react to changing residential, commuter, and traffic patterns.

The effort saw a complete redesign of the Staten Island bus network in 2018 and is now focusing on the Bronx. Following the redesign, bus speeds on Staten Island increased on average by 8.6 percent and trip reliability improved by 20 percent, according to data from Transit Center, a foundation that seeks to improve public transit. The bus routes in the remaining three boroughs will be redesigned over the next three years, according to Byford’s plans.

Upon completion of the Bronx plan, the MTA will have redesigned 27 of the 60 bus routes in the Bronx, and proposed frequency changes on an additional four routes. The plan will also implement 150 audio-capable “next-bus signs,” improving accessibility. Through expanding the use of queue jumps, which let buses bypass other traffic at intersections, and TSP, which holds green lights longer or turns lights green sooner for buses, the MTA aims to improve speeds significantly.

The MTA also expects to expand Select Bus Service, which allows riders to purchase a fare before boarding the bus to encourage all-door boarding and skips “local” stops in express fashion.

By modernizing fare payment, the MTA has committed to fully switching to all-door bus boarding by 2021, “but that process should be expedited to capitalize on the redesigns before congestion pricing comes into place,” Transit Center spokesperson Ashley Pryce said in a statement to Gotham Gazette, referring to the upcoming 2021 institution of new tolls on driving cars and other private vehicles into Manhattan below 61st Street.

In addition to the MTA’s current plans, some buses could become faster by stopping every four or five blocks instead of every two, Pearlstein said.

Whether it’s redesigning bus routes or eliminating bus stops, the MTA will of course have local battles. The Bronx redesign plan has been met with some opposition from those who believe it will be too disruptive. In Co-op City, the redesign plan will eliminate certain routes and stops that have upset residents. The new system will require many of the neighborhood’s residents to transfer two or three times to get where they are going, said City Council Member Andy King, who represents Co-op City, in an interview with Gotham Gazette. King said that Byford and the MTA proposed a redesign without consulting Co-op City residents.

On June 27, King and Co-op City residents met with the MTA.

“Public feedback is a critical part of our efforts to reimagine the borough’s bus network,” an MTA spokesperson said in a statement to Gotham Gazette. “We are currently in the process of reviewing the feedback we received before moving forward with any final decisions about the location of stops or changes to routes.”

The MTA declined to comment further on the number of bus routes that the plan would eliminate or the number of transfers it would require for trips in question.

“The transfer problem causes an issue. People in Co-op City would rather have convenience than timing. If I can get around Co-op City and it takes me 25 minutes, I will make sure I have enough time,” King said.

King and other community leaders met with Byford last week to discuss the problems they say the proposed redesign will cause for the neighborhood. Byford was receptive to King and the residents’ suggestions, King said.

“If ridership in Co-op City has not dwindled that means you are still getting the same kind of fares in Co-op City. If numbers aren’t down, don’t punish them because you have low numbers somewhere else,” King said, taking issue with a “cookie-cutter” approach to redesigns.

However, some view slight inconvenience as necessary for the bus system to be more efficient.

“It may take time for some riders to adjust to new routes and bus stop patterns, but if the MTA and DOT implement their plans well, riders will get faster overall trips and a better experience waiting for the bus,” Pryce said. “While some riders may be asked to walk further to a stop, those remaining stops should be equipped with amenities like shelters and benches that can improve the experience for riders.”

Better Buses Action Plan
In April, Mayor BIll de Blasio and his Department of Transportation (DOT), which has a lot of control over the streets, bus lanes, and related decisions, released the Better Buses Action Plan. The plan aims to see bus speeds increase by 25 percent citywide by the end of 2020 -- a goal de Blasio first announced in his February State of the City speech.

The plan calls for the improvement (through painting lanes, adding all-door boarding, and other measures) of five miles of existing bus lanes each year, the installation of 10-15 miles of new bus lanes per year, and the piloting of physically separated bus lanes by the end of this year. From 2013 through early this year, the DOT has built 111 miles of bus lanes across the city, according to the Better Buses Action Plan. The plan also includes an additional 300 TSP intersections and the implementation of bus camera enforcement.

“Our buses have some of the highest ridership numbers in the country, yet we see that our buses are limited when it comes to their reliability and frequency,” said City Council Member Ydanis Rodriguez, chair of the Council’s transportation committee, in a statement accompanying announcement of the Better Buses Advisory Group, convened by the mayor's office.

Bus lane cameras are currently limited to 16 of the city’s bus routes. They serve to enforce rules against parking in a bus lane, so as to take pressure off the police for finding violators and issuing tickets with fines for cars that park in or otherwise obstruct the bus lane. The program aims to improve bus speeds by making it clear to drivers not to block bus lanes.

At the end of the legislative session in Albany, lawmakers passed legislation to expand the number of automated cameras enforcing bus lanes. Owners of cars that block bus lanes will be fined $50 for the first offense, $100 for the second, $200 for third, and $250 for any additional offense.

“We are taking action to get New Yorkers moving and saving them time for the things that matter,” de Blasio said in a press release announcing the formation of the group. “With guidance from riders, our new Better Buses advisory group will come up with innovative solutions to get our bus routes up to speed,” he said.

2017 Stringer Report, De Blasio Announcement
The push to revamp the bus network got a shot in the arm in October 2017, following a report detailing the system’s ineffectiveness by Comptroller Scott Stringer.

Also in October 2017, de Blasio announced a plan to introduce 21 new Select Bus Service routes across the city. As of that time, according to the city, SBS accounted for 12 percent of the city’s bus ridership, but de Blasio said he expected that number to go up to 30 percent, according to comments during a press conference announcing the plan. Select bus routes average speeds 27 percent higher than local routes.

From 2013 to 2017, the number of SBS routes increased from six to 13. De Blasio expects increased select buses to improve service to areas that currently do not have regular bus service.

“The bottom line is we have to reach every single neighborhood. No neighborhood should be neglected. No one should have a problem getting around because of the ZIP code they live in. Select Bus Service is a difference maker,” de Blasio said in the announcement.

Car Culture and the Buses
Calls to improve bus service are coming in conjunction with broader efforts to improve pedestrian safety, reduce congestion, and decrease the city’s reliance on and deference to cars. City Council Speaker Corey Johnson recently introduced his “master plan for city streets” legislation, which includes a sweeping set of planks to “break car culture” by adding many more bus and bike lanes, and pedestrian plazas.

“A progressive city must do better for bus drivers and must deliver for bus riders,” Pearlstein said at the June City Council hearing on the bill. “This is powerful legislation to look forward to while we’re still unfortunately stuck on the bus.”

“We need much better bus and commuter rail service,” Nicole Gelinas, a Manhattan Institute fellow, told Gotham Gazette. “We need a better bus network to take pressure off the subway as we decrease reliance on cars.”

“There do need to be faster trips, and more service, and they need to meet those lofty goals,” Pearlstein said of the MTA’s redesign efforts. “Otherwise it looks like a service cut.”