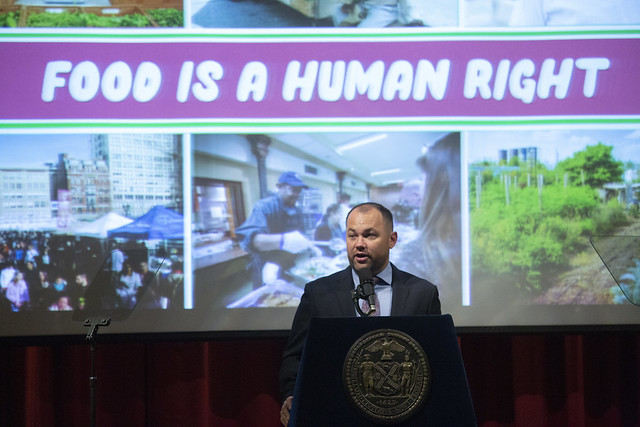 City Council Speaker Corey Johnson on Thursday announced a plan to address hunger and the lack of equitable access to fresh food in New York City, laying out a package of legislative proposals that the Council will consider over the next year.

Food insecurity — the absence of or insufficient access to affordable, nutritious food  — affected nearly 1 million New Yorkers as of 2017, according to a new City Council report that Johnson released at Cypress Elementary School in East New York. The school is the first in Brooklyn that has a greenhouse and incorporates nutrition education into the curriculum.

The Council’s report, titled “Growing Food Equity in New York City,” found that food insecurity particularly affects individuals living in poverty, seniors, and people of color, and it pervades higher education — 48% of students at City University of New York said they had experienced food insecurity in the last month.

Johnson, a Democrat who is exploring a run for mayor in 2021, outlined measures that would address neighborhood inequities in access to healthy food through improvements in food governance, reducing food waste, promoting healthy school lunches and nutritional education, and expanding urban agriculture.

The proposals include the creation of a citywide food plan, a push to help seniors receive Supplemental Nutrition Assistance Program (SNAP) benefits (also known as food stamps), and increased city funding for coupons called Health Bucks, which are provided to low-income New Yorkers to buy fresh food at any city farmers market.

“Adequate access to nutritious food is a human right,” Johnson said. “This principle isn’t just for developing countries. It’s something we must follow right here in New York City, one of the richest cities in the world.”

The food equity plan is the latest big policy announcement that Johnson has made since becoming speaker. In March, Johnson proposed a plan for municipal control of the city’s subways and buses, followed in May by a sweeping criminal justice reform agenda.

As part of the food equity plan, the Council will work to expand existing programs that have already been successful such as Health Bucks, nutrition programs in schools, and lunches cooked from scratch at public schools. One bill would require that schools send information about summer meals programs to families, and another would create an Office of Urban Agriculture that would focus on incorporating city farming and gardening into city planning.

The Council and the Department of City Planning will also work to expand the number of neighborhoods eligible to receive the Food Retail Expansion to Support Health (FRESH) zoning bonus. FRESH offers financial assistance and zoning incentives to grocery stores that provide affordable and fresh food in communities that lack access to nutritional food.

Johnson said the City Council will also advocate at the state and federal level to protect and expand access to SNAP benefits. In June, the Trump administration announced plans to change SNAP eligibility requirements. The U.S. Department of Agriculture estimates that nearly 3 million people would lose their food assistance as a result. Johnson said the Trump administration’s “relentless attacks” on SNAP are an enormous threat to the city as food stamps generate up to $5.3 billion in economic activity and the president’s “fear-mongering” has discouraged some who worry they would lose their immigration status.

“Shame on the federal government for using food as a weapon to disenfranchise vulnerable communities,” Johnson said. “Shame on the Trump administration for denying the rights of food to families and seniors while heavily subsidizing corporate interest.”

The speaker was joined on stage by Council Member Rafael Espinal, a Democrat who represents East New York. Espinal noted that 16% of New Yorkers go to bed hungry every night, and 20% of those city residents live in Brooklyn. The Council member has helped pass legislation that set up the city’s first website dedicated to urban agriculture and authored a bill with Brooklyn Borough President Eric Adams to create a comprehensive urban agriculture plan.

Espinal spoke of his own experiences with food insecurity growing up in East New York. He said healthy food was hard to come by, but his father’s garden helped reduce the number of times his family had to drive for miles to buy fruits and vegetables.

“I grew up learning about soil, harvesting and maintaining produce, eating healthy food, and how to become a healthy adult,” he said. “The majority of kids across New York do not have the same opportunity, and to this day most communities are deprived of this kind of experience.”

Another piece of legislation the council will consider would improve and codify the Office of Food Policy, which the speaker said has been under-resourced. Getting New Yorkers more accessible, healthy food options should be one of the city’s top priorities, Johnson said.