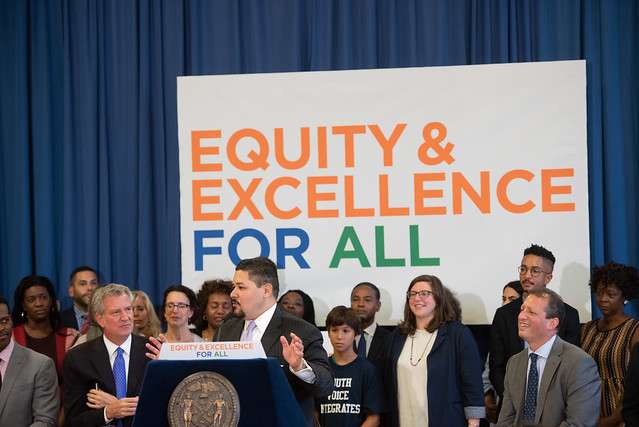 Following the city’s adoption of 62 recommendations targeting diversity and desegregation in public schools, a new report expected this month from the same advisory group will aim to tackle the tough topics of screened admissions and gifted and talented programs.

The two reports come from the Department of Education’s School Diversity Advisory Group, which Mayor Bill de Blasio formed in 2017 amid increasing demands that he take significant steps toward desegregating the city’s highly racially-segregated schools. The group released its first report with 67 recommendations in February, and the city accepted 62 of them in June, including adding diversity targets in middle school admissions, encouraging more districts to come up with diversity plans, and adding diversity metrics to an annual report, among other potential changes. The first set of recommendations largely dealt with elementary and middle schools at the district-level, with more specific admissions proposals coming in the second wave.

Members of the advisory group said in June that the second report was expected in just a few weeks, but have since said the report should be public by the end of August.

While some said the adopted recommendations are a positive step after years of the mayor and the DOE balking at the issue of school segregation, critics noted that as it stands the plan lacks timelines for implementation and more aggressive citywide solutions, including taking on high school admissions. The city did not accept recommendations to create a Chief Integration Officer or to consider moving the supervision of School Resource Officers from the NYPD to the Department of Education.

The first recommendations focused on pushing individual school districts to develop their own diversity plans -- de Blasio has expressed support for the few districts that have taken this on in the past and said he believes integration should be pursued by local communities not pushed by the administration. The city also adopted a framework created by the student-led advocacy group Integrate NYC called the five R’s (race and enrollment, resource equity, relationships across group identities, representation of staff, and restorative justice), which will be a foundation for creating school integration policy.

“Our schools are stronger when they reflect the diversity of our city, and we’ve taken real steps to integrate our schools, including adopting the student-developed ‘5 R’s’ framework for real integration,” DOE spokesperson Will Mantell said in a statement to Gotham Gazette. “We thank the students, educators, and families who have made their voices heard, and we’ll continue to act.”

Matt Gonzales, a member of the School Diversity Advisory Group and school diversity director at the nonprofit New York Appleseed, said the second report will lay out ways the city can change admissions policies as well as more detail on goals and timelines for implementation. He said the group wants to see some of their recommendations in the second report start to be put into effect in the fall.

Gonzales said he could not detail the specifics of the report, but that the group focused on areas where enrollment policies create “concentrations of privilege and vulnerability.” He added that the SDAG found that gifted and talented and screened admissions are tools that enable segregation.

The group’s intention, Gonzales said, was to originally write only one report, but the members later decided that the first report would lay out the framework for the conversation around desegregation. The next report will be more specific.

“The second report is really about following through on trying to address some of the primary mechanisms that facilitate segregation,” Gonzales said. “We could write a hundred reports, probably, on what needs to be done. There will be more to say and do after this report comes out.”

The SDAG overall aims to reshape citywide policies to desegregate public schools, which a UCLA report in 2014 said are the most segregated in the nation. Though some progress has begun, the gifted programs are a stark example of the segregated school system and remain a point of tension as the city wrestles with when and how to pursue racial and economic integration.

Students in kindergarten through third grade can take an exam to get into the gifted programs at the five gifted and talented schools that take students citywide or individual district programs.

David Bloomfield, an education professor at Brooklyn College and CUNY Graduate Center, said he expects the second report to be stronger than the first, but added that the real question is whether it will have any impact or if it is part of de Blasio’s strategy to appear concerned about segregation “without really doing anything.”

“Simply calling for the change does little to meet the change,” Bloomfield said. “This go-slow approach seems to be ineffective in making the school system more equitable.”

Bloomfield said the new report could go deeper into the “hundreds” of schools that use academic screens — test scores, grades, interviews, admissions visits, or geographic location — to admit students. About 25 percent of middle schools and 33 percent of high schools use screened admission processes, and the eight specialized high schools only admit students based on their SHSAT scores.

Schools Chancellor Richard Carranza has been critical of the use of academic screens, and the mayor this year unsuccessfully attempted to eliminate the SHSAT via state legislation. Though, Bloomfield said de Blasio could do more by focusing on the ways he could make the system more equitable without having to change state law: eliminating academic screens or changing the selection mechanism. Some have also called on de Blasio to create new specialized high schools, which the city has the power to do, while it could also change the admissions criteria at five of the existing eight schools (the other three are indeed governed by state law).

On the Max & Murphy podcast, City Council Member Brad Lander -- a Brooklyn Democrat who has been one of the leaders in pushing school desegregation efforts in the city, including in his own district, which has its own school desegregation plan already showing progress -- said the city has not made “any meaningful progress” for integration at the high school level yet.

Lander said the city could move to a process that requires integration in high schools where students travel to schools across the city, relieving the burden of residential segregation.

“High schools are a big opportunity,” Lander said. “Most of the focus has been on the specialized high schools, but we have about 400 high schools. And other than those eight, the city sets admission guidelines.”

Lander said that the first set of recommendations were a good development and he is optimistic for more progress, but that integration efforts are just getting started.