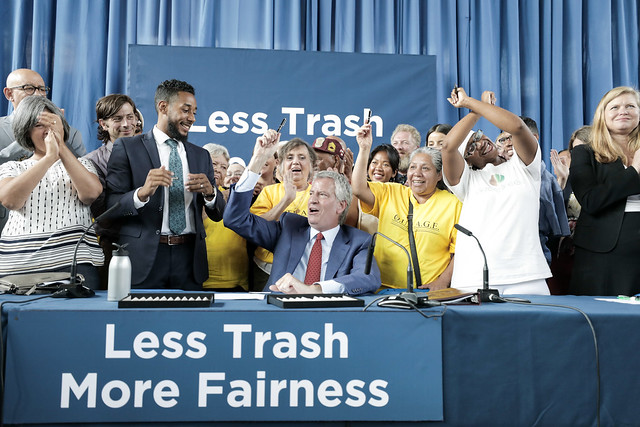 As stories of overflowing trash and endless street noise pile up on social media and in the news, Mayor Bill de Blasio’s administration has repeatedly said it is working on comprehensive approaches to some of the most challenging so-called quality-of-life issues affecting New Yorkers, but has yet to reveal an overarching vision for what the city plans to do.

Last October, Deputy Mayor of Operations Laura Anglin, who was appointed to the newly created role in January 2018, said her office was doing “a big study,” ordered by the mayor, to determine where the city needs to focus its attention to reduce complaints about quality-of-life problems. She said she wanted to identify the most critical needs utilizing a variety of indicators that go beyond some of the city’s typical metrics to see if they can shed new light on residents’ experiences.

Under de Blasio the city has undertaken piece-meal initiatives to address quality of life, an enormous category that can include anything from neighborhood cleanliness to noise pollution to traffic congestion. Yet administration officials say they are still not ready to talk about the study ten months after Anglin mentioned it and few, if any, details have been released.

“Our goal is to use this study to determine the specific needs of neighborhoods – and citywide – to give us a blueprint for the different solutions we can continue to implement to have a positive impact for all New Yorkers,” Anglin wrote in an email to Gotham Gazette Tuesday, without providing details on when the study might be released or its scope. She did tout the administration’s rat reduction program, which the mayor put $32 million towards in 2017 and expanded to 10 NYCHA facilities with serious rodent problems in 2018.

“One of the things the mayor has asked me to do is to really...look at quality-of-life issues from the resident perspective...using the survey data that [Citizens Budget Commission] has pulled together, as well as data from 311, Twitter, other social media,” Anglin said last year on the What’s the Data Point? podcast from Gotham Gazette and Citizens Budget Commission.

Anglin was referring to a survey of city residents conducted by CBC in 2017 to gauge public perception on the quality of city life and government services. Among other things, the survey generally expresses what the proliferation of sanitation-related images on social media reflect: New Yorkers, in many cases, are not satisfied with conditions on the street.

According to CBC’s data, residents have pointed to noise and sanitation as among the greatest areas of dissatisfaction in the city and de Blasio seems to have taken heed of those complaints.

When Anglin was named deputy mayor in January 2018, one of her main tasks was street cleanliness, she said in the October interview. “That’s a big thing we’re focused on here in the city and one of the things that I will be focusing on even more,” she said.

Another was addressing noise pollution.

Faced with a growing number of noise complaints in recent years, de Blasio has directed Anglin to prioritize ways to reduce decibel levels from countless sources in America’s largest city. Noisy neighbors, street traffic, construction, and helicopters all contribute to the loud sounds of the city. “I directed my Deputy Mayor for Operations to look at how we can reduce noise pollution across the board. I think it’s one of the biggest concerns New Yorkers have,” the mayor said on WNYC radio’s The Brian Lehrer Show last year.

A New York Times analysis found that in 2016 over half of noise complaints made to 311, the city’s helpline, were due to loud music or parties. In December, responding to callers on The Brian Lehrer Show, de Blasio suggested expanding the enforcement power of police officers responding to noise complaints. Overall, last year, the number of 311 noise complaints rose to nearly 437,000, up from roughly 260,000 in 2013.

The CBC data shows 40.4% of residents surveyed rate the city’s control of street noise as “excellent or good,” with the worst ratings in Manhattan, the Bronx, and Brooklyn. The CBC received over 9,800 responses to its questionnaire, representing every borough, community board, and almost every neighborhood. The survey also looked at racial differences in quality-of-life satisfaction: the group least distressed by city noise are white residents – roughly 44% rated conditions favorable -- while only 35% of Hispanic respondents, the lowest rating, felt the city was doing a good job keeping noise down.

Both before and after Anglin was promoted to deputy mayor, de Blasio has discussed measures to deal with other kinds of noise, like reducing helicopter traffic, limiting construction noise, and changing the sound of emergency sirens. Speaking with Gotham Gazette and CBC in October, Anglin also spoke about noise from roadwork and afterhours construction as something the city can manage.

“Our Deputy Mayor for Operations, Laura Anglin, is putting together a new plan to address a variety of elements of noise pollution. And it needs a little more work, but we’ll have something to say on that soon,” de Blasio said more than a year ago, last August 9, in response to a press question on the subject of noise pollution, after a rally on another topic.

In June of this year, the mayor and City Council announced an agreement on the city’s $92.8 billion fiscal year 2020 budget, which included $1.5 million to equip Fire Department vehicles with quieter sirens.

The budget also included additional funding for litter basket collection – $8.6 million, up $3.5 million from the previous year according to a Department of Sanitation spokesperson. “Our committee is constantly fielding complaints from New Yorkers that there is too much trash on the streets. The solution is simple: More litter basket collection,” said Council Member Antonio Reynoso, chair of the sanitation and solid waste committee, in a statement in May calling for the mayor to restore funding for the service before the budget was finalized.

In 2018, the Department of Sanitation received nearly 41,000 complaints through 311 related to missed refuse collections, nearly 2.5 times the number of 2013 complaints. Another 39,000 complaints fell under “dirty conditions,” up from the roughly 33,000 similar complaints filed in 2010.

The CBC survey, which captures New Yorker satisfaction, helps put this data into perspective. Less than half of respondents -- 47.7% -- put the cleanliness of their neighborhoods in the “excellent or good” range. The results show great variability by borough and ethnicity: the Bronx and Brooklyn scored significantly lower than Staten Island; and, the survey notes, Asian and Pacific Islander and white residents were satisfied with sanitation conditions close to 10 percentage points more than other respondents.

But the CBC survey is notably different from the types of metrics the city is currently using to evaluate issues like neighborhood cleanliness -- both in terms of methodology and results.

Garcia told Gotham Gazette the main metric the Department of Sanitation uses to measure cleanliness is the “scorecard” produced by the Mayor’s Office of Operations and published in the annual Mayor’s Management Report, which details data on agency performance and city services. The scorecard calculates cleanliness based on data collected by field inspectors looking at things like the amount of trash in the street, which do not capture resident satisfaction. “The basic metric on cleanliness has been the scorecard, and it’s been the scorecard for years and years and years,” she said.

Far from the CBC survey results, the scorecard rated 95% of city streets “acceptably clean” and as “filthy” just 0.2% of the time in fiscal year 2016. Questions about the scorecards have been raised in the past.

“We always strive to make sure residents are happy, but I think the methodology probably is very, very different...How you feel about something can vary based on your experience. We certainly want the public to feel like everything is cleaner,” Garcia said.

“If you’re sitting in Laura Anglin’s seat, you’re wondering, what is the disconnect here?” said Maria Doulis, Vice President of CBC, in an interview, referring to the discrepancy between the city’s metrics and the CBC survey.

“What are folks seeing and experiencing that is different than what our inspectors are seeing? Are inspectors looking for things that don’t really matter to people?,” Doulis added. “I think those are all appropriate questions to be asking, if you’re thinking about tackling this kind of problem.”