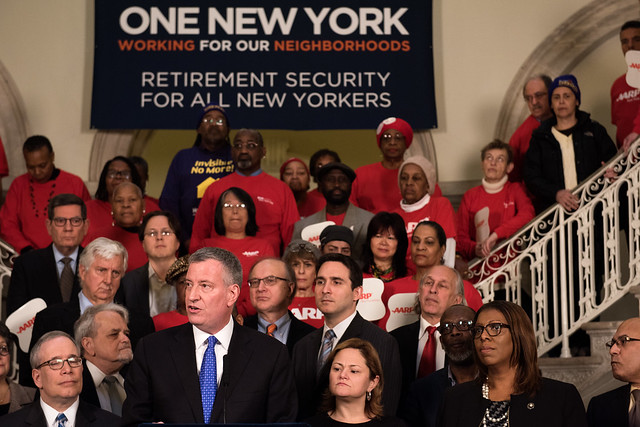 In his State of the City speech in January, Mayor Bill de Blasio promised that the city would create a system of retirement security for millions of New Yorkers who work in the private sector and may not have access to employer-provided savings plans. It was a revival of an effort the mayor had first pushed in 2016 but that bumped up against the change in presidential administrations and federal approvals apparently needed. But eight months after de Blasio’s speech at the start of this year, the New York City Council is ready to look at the idea through two bills that will be examined at a hearing later this month.

“We'll create a universal retirement system in our city, because if you've worked for decades, then you've earned the right to retire in peace,” the mayor declared in January. There has been little public movement since, but as the mayor continues his presidential campaign, an initial Council hearing provides new promise.

De Blasio first put forward a “Retirement Security for All” proposal in 2016, but the legislative effort to achieve it was cut short in 2017 when President Donald Trump approved new federal regulations passed by a Republican-led Congress that undid an Obama era rule and limited municipalities from creating private-sector retirement programs. City officials believe they can still move ahead, however.

In May 2018, City Council Members Ben Kallos and I. Daneek Miller sponsored the pair of bills that would establish such retirement savings programs for roughly 2 million private sector employees working in New York City.

Kallos’ bill would create individual retirement accounts (IRAs) for workers at New York City businesses that employ 10 or more people and do not currently offer such programs. Employees would be automatically enrolled unless they choose to opt out and the IRAs would be funded through payroll deductions at a default rate. Though they would have to help administer the paperwork, employers would not have to contribute to the savings, nor would any public funds be directed to the individual accounts. The bill also sets up a complaint mechanism for employees in case businesses do not comply and creates varying civil penalties for violations of the law.

Miller’s bill creates an unpaid three-member retirement savings board appointed by the mayor to oversee the private IRAs. The board would be responsible for investing IRA funds and contracting with financial institutions to manage them; it would also be charged with ensuring that fees for the programs remain low and for informing employers and employees of their rights and responsibilities under the law.

Despite what seem to be hurdles at the federal level, both bills will be considered on September 23 at a joint hearing of the City Council’s Committee on Civil Service and Labor, which Miller chairs, and Committee on Contracts.

Miller said the city’s involvement in the program, through the board his bill would create, will mitigate some of the administrative burdens that small businesses would otherwise face. “We want to try to fill a gap here,” he said in a phone interview. “I think there's a real opportunity for a win-win for everybody involved to provide sensible retirement opportunities.”

Miller said the need to pass retirement security legislation was much like the issue of climate change, something that needs to be addressed sooner rather than later. “A crisis is a terrible thing to waste,” he added, referring to the stark data around the many thousands of New Yorkers who have little to no retirement savings.

Kallos said in an interview that he is confident the proposals will pass and stand up to scrutiny under the federal Employee Retirement Income Security Act of 1974, citing other jurisdictions that have advanced similar programs, including New York State.

“What has changed is that several jurisdictions have moved forward with the program with thousands of Americans gaining access to retirement accounts for the first time ever, and we're not seeing those plans being challenged,” he said. “And that seems to be putting forward a pathway for us.”

At least ten states including New York have enacted legislation to allow private sector retirement programs. In last year’s state budget, the Legislature approved the creation of the New York State Secure Choice Savings Program, which, unlike the Council proposal, is a voluntary opt-in plan for private sector employers rather than an opt-out one. It is meant to be formulated over two years.

“I think there's a national energy around this,” Kallos said. “The mayor, he's bringing universal pre-K around the country. And I think that in a nation that is growing more and more concerned about how and when they will be able to retire and whether social security will even be there for them, having ‘Retirement Security for All’ is something important for the mayor to interject into a national conversation.”

Kallos expects an aggressive timeline, saying that the bills could pass as soon as October and be signed into law by the mayor by November. If so, and even as they simply get new consideration and attention, they could provide a headline issue that the mayor can tout if he continues to seek the Democratic nomination for president.

On the campaign trail, de Blasio has focused on issues he believes are of paramount importance to “working people,” including his signature universal pre-kindergarten program. That includes his boasts of a proposal to give paid personal leave to private sector employees, something the mayor has repeatedly said will happen this year even though the City Council does not appear close to approving it.

“When the mayor’s chosen to champion issues, he’s made it happen,” Kallos said.

Beth Finkel, state director of AARP New York, praised the Council’s and mayor’s efforts. “We're very interested in anything that helps people to be more prepared financially for their retirement,” she said, noting that individuals are 15 times more likely to save for retirement if they have access to a savings program that automatically makes payroll deductions. “That's our mission, that people can age with dignity and be prepared for their retirement. And you can't wake up when you're older and say, okay, now's the time. So having something like this in place where people can save throughout their career, that's exactly the type of policy that AARP is very, very supportive of.”

AARP members, Miller, and Kallos were among those who celebrated at the February 2016 City Hall rally de Blasio held to advance the retirement savings plan, which has stalled in the three-plus years since.

Both Kallos and Miller expect little opposition at the local level, but there is a possibility that the bills may come under fire from private groups such as the ERISA Industry Committee, which lobbies on behalf of the country’s largest private employers with regards to employee benefits policies, or companies that sell retirement investment products.

“Retirement Security for All is tantamount to what would be the equivalent of a public option for insurance companies,” Kallos said. “And ultimately, companies that sell 401(k), 403(b) and other investment products have traditionally opposed this because they would rather see people not saving for retirement than see competition. And I think the real competition is having the fees that they can charge undermined.”