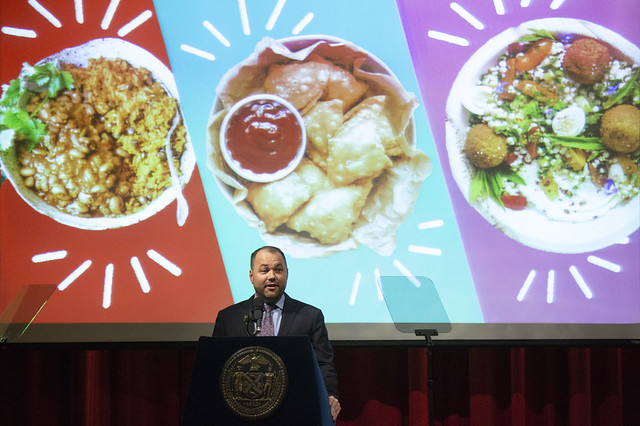 The City Council is set to consider a number of bills related to food policy at a hearing Wednesday, including a proposal to codify an Office of Food Policy, a month after Council Speaker Corey Johnson unveiled an expansive food equity plan with the creation of the office at its center.

The Council’s Committees on General Welfare, Economic Development, and Education will meet at City Hall Wednesday afternoon to examine a package of 14 bills and two resolutions dealing with nutritional access and public education, urban agriculture, and food waste.

Together the bills touch on many of the planks in Johnson’s nascent food platform, which includes expanding existing food programs and tying economic opportunity to farming and nutrition, all under a comprehensive citywide plan coordinated by a newly empowered Office of Food Policy.

Representatives of the Speaker say Johnson will not be attending the hearing, which is expected to be led by Council Members Stephen Levin, Paul Vallone, and Mark Treyger, who chair the three committees. Other members who are either lead sponsors of the legislation at hand or are members of the committees or otherwise interested will also participate.

A number of prominent stakeholders, like Manhattan Borough President Gale Brewer and Andrea Strong of the NYC Healthy School Food Alliance, plan to testify. A representative of the office of Deputy Mayor for Health and Human Services is also expected to speak.

“Food is a human right. Yet in our city — one of the richest in the world — more than 1 million New Yorkers are food insecure and there is inequitable access to fresh and healthy food in many neighborhoods throughout the five boroughs,” Johnson said in a statement to Gotham Gazette. “The Council is working to address these gaps with new legislation and budget proposals.”

On August 1, Johnson released a report entitled “Growing Food Equity in New York City,” which outlined the Council’s agenda to combat inequities in accessing nutritional food and ensure the city has a comprehensive food policy responsive to the needs of different demographics like students, seniors, low-income residents, and non-white New Yorkers. Wednesday’s joint hearing will be the first time the bills are discussed in a formal legislative setting.

Johnson is the co-sponsor of two of the bills being considered, including the proposal to establish an Office of Food Policy and one to increase reporting on the city’s food system, whose main sponsors are Ben Kallos and Paul Vallone, respectively. Council Members Kallos, representing the Upper East Side of Manhattan, and Diana Ayala, representing East Harlem and the South Bronx, are co-sponsors of every piece of legislation under review by the committees.

“A lot of these bills are bills on issues we have been working on for quite some time,” Kallos told Gotham Gazette in an interview. “In terms of the overall package, it’s amazing to work with a Speaker who is really empowering so many members -- taking such a large package that is going to do so very much, and sharing it with many members and bringing them into the fight against food insecurity and hunger.”

Under the legislation, the Office of Food Policy would be responsible for developing and coordinating initiatives in four categories: 1. promoting access to healthy food for all city residents; 2. developing support programs to make nutritional food more affordable; 3. expanding reporting in the annual Food System Metrics Report published by the Office of Long-Term Planning and Sustainability; and 4. collaborating with the Department of Health and Mental Hygiene to update food standards for meals purchased, prepared, or served by city agencies. The director of the office would be appointed by the mayor or the head of a mayoral agency.

There is currently an Office of the Director of Food Policy under the mayor, but the position is vacant. It was previously held by Barbara Turk, who has been serving in another role -- senior advisor at the city’s Administration for Children’s Services -- since April, according to her LinkedIn account.

“We believe that the Mayor’s Office of Food Policy should continue to remain an important asset in the City’s food policy efforts and look forward to discussing these proposals with the Council,” a spokesperson for Mayor Bill de Blasio, Avery Cohen, wrote in an email. The mayor’s office did not respond to emails asking when the next director of food policy would be appointed or for information about the hiring process.

The bills being heard Wednesday include measures that would fall under the food policy director’s purview, whether that office is codified into law or not.

One bill, sponsored by Bronx Council Member Vanessa Gibson, would require the office to consult with city agencies, community-based organizations, and other stakeholders in the food system to develop a ten-year plan focused on food equity and insecurity. The plan would set goals to increase access to nutritional foods through existing and newly-developed programs, reduce food waste, and develop the economic conditions surrounding urban agriculture. The Office of Food Policy would be required to report on the progress made toward those goals.

Other bills in the package would establish new governmental bodies to deal with other elements of Johnson’s food platform. One measure sponsored by Bronx Council Member Andrew Cohen would create an advisory board to assess and make recommendations regarding the city’s food procurement policy and to evaluate contract bids. Another, sponsored by Council Member Rafael Espinal of Brooklyn, would create an Office of Urban Agriculture and an accompanying advisory board to develop and report on a plan to protect and expand urban agriculture.

Under the package, community gardens would be partially protected from opposing land-use interests. The city’s reporting and assessment of the community garden system would be centralized and farmer’s markets would be allowed to operate on their premises, making them more economically viable and increasing access to community-produced healthy food.

The package also includes a focus on improving public engagement with the city’s existing food access programs like Health Bucks -- coupons for low-income New Yorkers to use at farmer’s markets -- farm-to-city projects, nutrition programs in schools, and summer meals.

Another theme is reducing food waste in New York. Johnson’s report cites a National Resources Defense Council analysis claiming the average New York City household wastes 8.7 pounds of food per week, of which six pounds are edible at the time of disposal.

One bill sponsored by Council Member Carlina Rivera of Manhattan would require any city agency with food procurement contracts to come up with a plan to limit the amount of food that doesn’t make it to the plate. Under the bill, each agency would be responsible for designating a coordinator to report on its food waste reduction plan and its implementation.

As a whole, the new food plan would require coordination among a myriad of city agencies, like the Human Resources Administration, Department of City Planning, and Department of Health and Mental Hygiene, among others. Many of the bills in the package are intended to facilitate or mandate that coordination. Two resolutions call on the state to expand supplemental nutrition assistance benefits, one of which will require action by the state Office of Temporary and Disability Assistance.

“A lot of our food programs are spread across multiple agencies and we need somebody focused on them, all working together comprehensively to ensure folks don’t have to deal with hunger or food insecurity,” said Kallos.