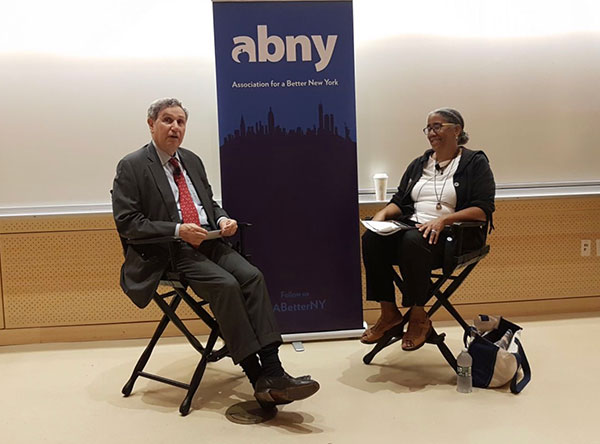 A series of proposals on the ballot before New Yorkers this fall is meant to revisit city political power dynamics established after the 1989 Charter Revision Commission, which 30 years ago reshaped New York City government into its current form. That is what Gail Benjamin and Carl Weisbrod, two leaders of the 2019 Charter Revision Commission, said during a Wednesday morning discussion hosted by the Association for a Better New York and Citizens Union at the New School.

From the early voting period of October 26 through November 3 and on Election Day, November 5, New York City voters will be able to vote “yes” or “no” on five ballot questions that include 19 potential New York City Charter changes, such as instituting ranked-choice voting in some elections; sharpening the teeth of the city’s police oversight board; protecting the annual budgets of several elected officials; giving community boards more warning about land use changes; and more.

Benjamin and Weisbrod stressed that they want to educate the public on the new proposals and push people to go to the polls to vote in what most acknowledge will be a very low turnout election. There are few electoral races on the ballot this fall.

Most charter revision commissions have been created and appointed entirely by the mayor to examine and revise the powers, structures, and processes outlined in the city’s central governing document, often with the outcome of making narrow changes that conform to the mayor’s agenda.

The 2019 Charter Revision Commission is different. It is the first charter commission formed by the City Council, not the mayor, with the authority to select commissioners shared among the Council, mayor, public advocate, comptroller, and borough presidents, leaving no one entity with a majority of appointments.

The result, Benjamin and Weisbrod believe, is a set of proposals that, if approved by voters, will helpfully refine -- but not significantly upend -- the balance of powers between the executive and legislative branches of city government, and give the City Council and other city offices like the public advocate more authority, especially in the areas of budgeting and appointments.

“The fundamental question before the commission was, ‘Fundamentally, is the balance of power between the executive branch and legislative branch correct,’” Weisbrod said.

The commission did not, for example, propose to voters that community boards get veto power in the land use review process, that the City Council get more say in designing the annual municipal budget, or that members of the Civilian Complaint Review Board (CCRB) become popularly-elected.

“I think that what we’ve done will redound to the credit of each one of the citizens of the city, and will help organize and stabilize the city going forward for the next 30 years until there is another major charter commission,” Benjamin, who chaired the 2019 commission, told the audience.

Charter revision commissions modify the City Charter by putting proposed amendments on the ballot in the form of referenda for voters to approve (or not). According to the law, charter commissions are supposed to be independent of the officials who appoint them, and are mandated to examine every chapter of the Charter, soliciting input from the public and experts.

The 15 commissioners of the 2019 Charter Revision Commission, including Benjamin and Weisbrod, heard over a thousand proposals before staff whittled the list down to 45, of which the commission took up 19. Those 19 proposed charter amendments will appear on the ballot in the form of five questions covering: elections; the Civilian Complaint Review Board; ethics and governance; city budget; and land use.

The 1989 commission was empanelled to deal with the redistribution of power necessitated by the abolition of the Board of Estimate, which the Supreme Court had found unconstitutional for violating the principle of one-person-one-vote. The 1989 commission established a strong executive branch, while the City Council gained powers over land use and some budget authority, and the mayor controlled most of the other powers that had been held by the Board of Estimate, including a great deal of influence over the size and details of the city budget, according to Benjamin.

“We wanted to look at how that was working after 30 years and after changes that were not foreseen,” Benjamin said. Chief among those unforeseen changes were term limits for city elected officials, especially members of the City Council.

In 1993 and again in 1996, voters approved two-term limits on the mayor, City Council, and other elected offices. In 2008, then-Mayor Michael Bloomberg and collaborators in the Council passed a law extending term limits to three terms, which was later reversed in a subsequent referendum in 2010.

“I believe that, having worked at the Council in particular, the term limits of the Council led to a body that could not easily be an effective balance against the mayor,” said Benjamin, who was appointed chair of the commission by City Council Speaker Corey Johnson. Because “we already have a strong mayoral system,” she added, “it is important and significant, therefore, to spread power out overall so that other voices are heard.”

Two guiding principles of the 2019 commission, the two commissioners told the audience Wednesday morning, was not to take up issues that could be addressed through Council legislation or the mayor’s rulemaking, and not to take up charter amendments recently addressed by voters. The body left term limits aside and went after more granular adjustments to empower the Council.

Some of these ‘tweaks’ deal with the city budget, addressing concerns about a mayor using budget power to target political opponents rather than advance a fiduciary cause. The 2019 commission is proposing guaranteed budgets for the public advocate and borough presidents, two categories of elected office that often serve as a foil to the mayoralty. Another 'tweak' would require the mayor to submit revenue estimates to the City Council earlier in the fiscal year and budget modifications within 30 days of updating the city’s financial plan.

The budget proposals “are an effort to redress that possibility without fundamentally damaging the power of the executive to determine what the overall size of the budget should be -- what the revenue estimates are -- without changing the Council’s role in appropriations,” Weisbrod said.

Expanding the powers of the CCRB proved to be one of the most contentious issues, unfolding before the 2019 commission against the backdrop of high-profile disciplinary proceedings for Daniel Pantaleo, the NYPD officer who in 2014 used the forbidden chokehold that led to Eric Garner’s death on Staten Island.

The CCRB is an independent oversight agency charged with investigating and prosecuting certain cases of police misconduct. Among the charter commission’s proposals are one that would give the CCRB the authority to investigate false official statements made by an officer under investigation. Currently, the agency can only refer their suspicions that an officer is lying to the police department to be dealt with internally.

“I think that was by far the most heated issue we’ve dealt with,” Weisbrod, an appointee of de Blasio, said Wednesday. “I guess land use, which we felt was too complicated and inappropriate in many ways to deal with in the charter was another,” he added.

“I think that’s the only life and death issue that we’re dealing with here,” Commissioner Sateesh Nori told Gotham Gazette in June. Nori, an appointee of then-Public Advocate Letitia James, was not part of Wednesday’s panel.

For Weisbrod, the most impactful proposal before voters is not related to police, but to city elections. “At least in my view, the most consequential recommendation that the [charter commission] has come up with is ranked-choice voting,” he said Wednesday.

The method, which allows voters to rank candidates in order of preference, rather than selecting just one, “will fundamentally, in my view, change the way we go about electing our local representatives,” said Weisbrod. Supporters of ranked choice voting, like Weisbrod and Benjamin, believe it will change the way campaigns are run in the city by forcing candidates to reach constituents beyond their base of support and eliminate the need for costly runoff elections in primaries.

The five questions containing the 19 proposed Charter amendments will appear on one page of the ballot in 7.5 point font, according to Benjamin. Voters will have the opportunity to vote on the ballot proposals on Election Day, November 5, and at their designated early voting site between October 26 and November 3.