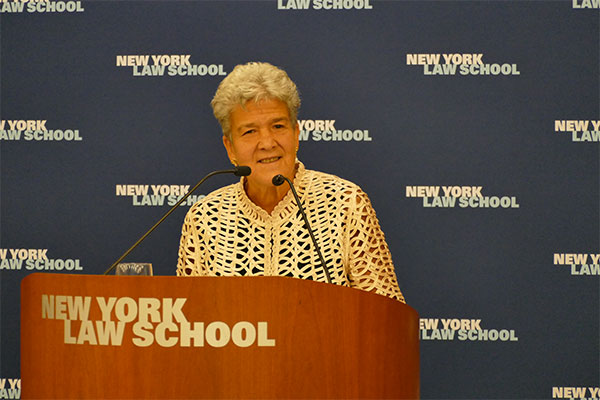 In a Friday morning speech about how New York City’s limited space is used, Marisa Lago, director of the Department of City Planning, discussed some of the department’s approaches to the housing, employment, and equity challenges facing the city.

The city has a population of 8.4 million and is “the only older U.S. city that has surpassed its 1970s-era population peak,” said Lago, who was appointed by Mayor Bill de Blasio to direct the Department of City Planning and chair the City Planning Commission in early 2017 after over three decades in city and federal government. The city has 4.5 million jobs, including 800,000 created between 2010 and 2018, she told the audience attending the CityLaw breakfast at New York Law School.

In the picture Lago painted Friday, the Department of City Planning is responsible for balancing New Yorkers’ personal and professional needs with the implications of broad, even global, economic changes in a way that makes room for long-term growth. The work often revolves around the limited resource of land, which is heavily regulated by zoning rules enshrined in law or controlled by property owners, the City Planning Commission, and the City Council.

“It’s important to remember that, despite the growth in population in the city, we still have the same 303 square miles of land,” Lago said. “So to grow sustainably and equitably, we have to build more housing and especially affordable housing, and we also have to create what I call ‘space for jobs.’”

Using zoning rules to expand housing and job production is a fixture in the lifecycle of big cities throughout the country and the world. Lago also pointed to the need for more housing development in the New York City suburbs. The prongs of Lago’s approach to city planning, which extend back before her tenure at the Department of City Planning to her predecessor, Carl Weisbrod, include utilizing and expanding flexibility in zoning, and embracing data-driven planning, she said.

Flexibility in Land Use
Flexibility in zoning is key for a city as large as New York to adjust to demographic shifts and technological developments that drive and are driven by changes in the economy. The space needs of so-called “classic sector” jobs, like finance, the arts, even some manufacturing, are different in the new economy of online shopping and changing consumer preferences.

Lago believes having the ability to shift land use regulations from generation to generation is essential for the city’s long-term economic viability. “Powerful as zoning is, it can’t stop the tide of a changing global economy,” she said.

One of Lago’s focuses is updating the city’s mid-century zoning of manufacturing districts outside of Manhattan that place limits on height and density and require a high degree of space dedicated to parking. DCP is looking for opportunities to reduce parking requirements in those districts that have public transit options, she said, “to provide a wider array of permitted densities that will allow manufacturing business to grow vertically and also to give more flexibility to the envelopes of buildings.”

“Sometimes the best thing that the city can do is to get outdated, overly-proscriptive zoning out of the way of businesses that want to construct space for jobs,” said Lago.

But the city’s existing zoning already allows for a high degree of flexibility to meet existing construction demands. As-of-right development is the “workhorse of producing both housing and space for jobs,” Lago said Friday. As-of-right development refers to proposed construction or repairs that comply with existing zoning requirements. They don’t need approval from the City Planning Commission and City Council to proceed, meaning they do not have to go through the city’s extensive land use review process (ULURP).

The city over the last decade has relied on as-of-right development to produce a significant proportion of its new housing stock. According to Lago, 80 percent of the new housing built since 2010 -- housing approximately 300,000 New Yorkers -- has been as-of-right.

“If we were like San Francisco, where practically every single development project has to go through discretionary project review, we would be producing far less housing, thus becoming increasingly unaffordable,” she said.

But in some cases, Lago is hoping to insert flexibility on a broad scale through new zoning instruments.

Climate resiliency has become a significant focus of city planners in the seven years since Superstorm Sandy left entire neighborhoods in need of repair and reconstruction. The city planning department is pursuing changes to land use requirements throughout the city’s floodplain to make it easier for home- and small business-owners to mitigate flood risk.

Currently, elevating buildings along the waterfront, a common response to flood risk, often violates building height requirements and moving mechanical equipment from basements to higher floors takes up valuable residential square footage, according to Lago. For the past seven years, DCP has had in place temporary emergency zoning regulations that remove some of these requirements and encourage better flood resiliency construction.

Under a new plan called Zoning for Coastal Flood Resiliency, DCP hopes to codify the temporary regulations. Lago said the new amendments will go into ULURP early next year.

“We’ve now had seven years of living with these temporary regs and we’ve learned a ton by reaching out extensively to neighborhood residents in the city’s various types of flood-prone areas,” she said.

When DCP feels zoning regulations need to be changed, it is common for the agency to try to harness the demand of private sector stakeholders. Rezoning, and especially upzoning -- zoning for added building height and/or density -- is often a negotiation between the city and the private landowner seeking to benefit from added capacity on the land.

Under the mayor’s signature housing policy, which is intended to create or preserve 300,000 units of affordable housing over 10 years, the city instituted Mandatory Inclusionary Housing (MIH) to ensure the creation of affordable housing in exchange for upzoning. MIH, which became law in 2016, is a permanent change to the city’s zoning code that requires a portion of housing units in newly upzoned plots or neighborhoods to be made permanently affordable. One of the criticisms of the plan is that the affordability standards in many cases are not truly affordable to local residents and do not reflect the demographics of the city.

Lago said housing production is essential to making the city affordable, even as it causes gentrification and displacement. “I think that we have to acknowledge that the fear of displacement and the fear of gentrification is real,” she said. But, “we also have to put the lie to the claim that if we build no more housing that somehow the city will become more affordable. That just is not true.” But in her prepared remarks she did not address the middle ground between those two thoughts, which is where one major critique of the de Blasio administration’s neighborhood rezoning and affordable housing policies resides: that they are not as helpful as they could or should be in addressing the city’s affordability crisis for the many New Yorkers who feel its crunch most acutely.

Asked about “actual” affordability in reference to this criticism during the question-and-answer session that followed her remarks, Lago cited programs administered by the city’s Department of Housing Preservation and Development that create set-asides for extremely low-income people, the seniors, and formerly homeless people. In terms of the zoning regulations DCP and CPC have influence over, Lago defended the affordability tiers in many of the rezoned neighborhoods, which create “workforce housing” serving the needs of middle-income professionals like teachers and firefighters.

Data-Driven and Regional Planning
On Friday, Lago emphasized the importance of “community-informed, fact-based” city planning. She discussed recent examples of research-based analysis, which DCP has undertaken to inform its work.

This summer DCP released a study on retail-store vacancy that examined over 10,000 storefronts in 24 pedestrian-oriented shopping corridors across the five boroughs. The report found that the vacancy rate of storefronts was not uniform city-wide and the reasons for vacancy varied from neighborhood to neighborhood, according to Lago.

“This research that we have done is going to inform our neighborhood planning work and I hope the work of other policy-makers who may have non-zoning tools to address the needs of small-businesses throughout the city,” she said.

DCP has also used, Lago said, quantitative research to confirm what it had long-believed: that in a city with limited space and as many transit options as New York, tall buildings are essential for creating dense housing stock. It also reveals information about what range of building heights the city can allow to create the level of density needed to house the growing population, she said.

But the measurements are not always complete.

At a City Council oversight hearing in May, representatives of DCP and the Mayor’s Office of Environmental Coordination revealed that the city has no procedure for assessing the accuracy of Environmental Impact Statements -- required when a proposed rezoning could potentially change the neighborhood -- after a project is complete. Council Members and Public Advocate Jumaane Williams have introduced a number of bills to improve this, including requiring a racial impact study to accompany rezoning proposals. The bill will mandate reporting on the potential effect the proposed rezoning would have on the racial make-up of the area.

Lago wants to see data-driven approaches to zoning expanded to the regional level by continuing the work of DCP’s regional planning office started by Weisbrod. The regional planning office is partnering with DCP counterparts in municipal governments throughout the New York City metropolitan area with the understanding that housing affordability depends on the supply of housing outside the five boroughs and that the city is the job center for the region. Lago says she hopes to continue to leverage regional data to inform the work and partnerships of local governments.

“In the city we understand that housing affordability is a major challenge, but we also have to be aware that the region as a whole is falling woefully behind on housing production,” Lago said. “Historically, the suburbs to our north and east have been affordable alternatives to city living, but for years these jurisdictions have allowed extremely restrictive zoning to curtail their housing production."

“Our goal is to bring regional knowledge to bare in our and in other governments’ local planning efforts,” she added.