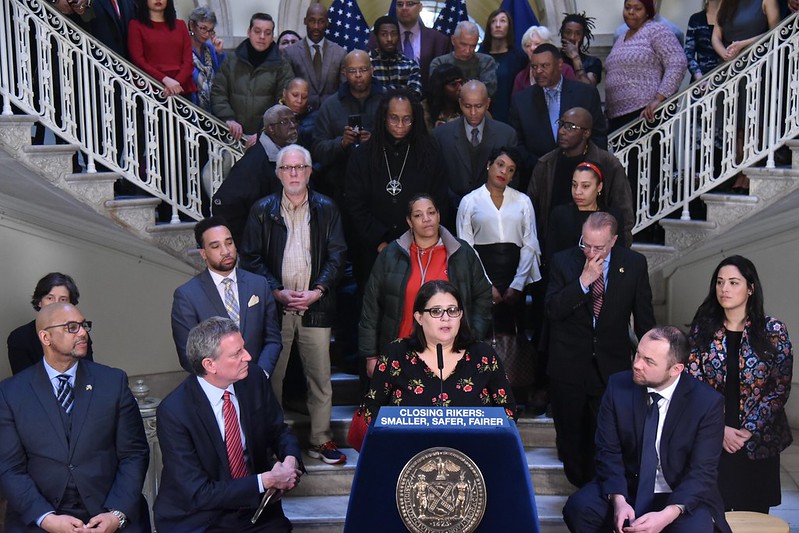 The plan to close the Rikers Island jails and replace them with four borough-based facilities has sped through the city’s land use process and is awaiting approval from the New York City Council, prompting both support and rebukes from criminal justice reform activists and those who prefer to keep most city detainees on the island. If it passes at the scheduled October 17 vote, full implementation of the plan will fall in the hands of a future mayor, perhaps two, and the four high-profile elected officials expected to be running for the position in 2021, when Mayor Bill de Blasio is term-limited, aren’t all on the same page.

The city’s Rikers closure plan was set in motion in 2017 and aims to create smaller and safer jail facilities closer to courthouses in every borough except Staten Island. It includes three larger jails where existing facilities exist, plus a new jail in the Bronx. It’s dependent on reducing the city jail population below 5,000 detainees by 2026, a target the city is on track to exceed, the de Blasio administration has said given criminal justice reforms passed in Albany last year and city arrest trends.

As of July, there were about 7,400 detainees across the city jail system, many of them pre-trial and held in the problem-ridden Rikers jail complex, down 2,000 from when the closure plan was announced. Last month, the City Planning Commission approved the combined land use application for the four facilities, which are expected to cost about $9 billion together. The application was then sent to the City Council, which held a public hearing on the plan and is expected to hold the vote next week.

So far, four leading Democratic candidates have either declared or are expected to run for mayor in 2021 – City Council Speaker Corey Johnson, Comptroller Scott Stringer, Brooklyn Borough President Eric Adams, and Bronx Borough President Ruben Diaz Jr. All four are facing term limits and cannot run for reelection. While Stringer was the first of the four to call for closure of the Rikers jails, Johnson has the most on the line as City Council Speaker – where he continued the legacy of his predecessor, Melissa Mark-Viverito, helped craft the current plan and move it to the verge of passage – and all four have supported the general concept of closing the island jails.

Whomever becomes the next mayor, implementation of the jails plan is likely to become a defining first-term issue.

Most of the four leading likely candidates for mayor insist that a borough-based jails plan must be accompanied by broader criminal justice reforms and community investments that would continue to reduce the number of people incarcerated in city facilities. The size of the four jails is also at the top of the list as negotiations continue between the de Blasio administration and City Council members, particularly Johnson and the four members who represent the districts that will be home to the facilities.

“We have an opportunity to close Rikers Island, which will help change our city for the better,” Johnson said, in a statement to Gotham Gazette. “This whole process started with activists who were directly harmed by Rikers raising this as a necessary step to transform our criminal justice system. This isn’t about just closing jails. I want investments in our City that will help end the pipeline to prison that’s done so much damage to our communities.” Johnson and former New York Chief Judge Jonathan Lippman, who led a commission empaneled by Mark-Viverito that pushed de Blasio into support for closing Rikers, co-authored an op-ed earlier this year explaining why the city must seize this moment for closing the island jails.

Adams made a series of recommendations to the proposal when it was going through the land-use process, and while he is supportive of the general plan, he continues to hope the Council will heed some of his words.

“Beyond siting the [Brooklyn] facility and determining height and capacity, we also need to focus on how we disrupt the pipeline to our criminal justice system, and reduce recidivism rates,” he said in a statement to Gotham Gazette, echoing Johnson. “For example, a significant percentage of Riker’s inmates are dyslexic. That’s why my recommendation outlines steps we can take to improve educational opportunities and provide wraparound services that must be part of a long-term approach to improving our criminal justice system.”

Stringer continues to support closing the Rikers jails, but is also calling for additional community investments in the final deal. “Rikers Island is a symbol of injustice, and we can’t just close it, we have to shut it down forever by ensuring we never repeat the mistakes of the past,” he said in a statement. “Before moving forward with any vote to close Rikers Island, the City must commit to developing and funding a plan to bolster the supports that will actually enable communities to thrive. This is what communities have been calling for and the administration has so far failed to deliver. Without that commitment, thousands of New Yorkers will continue to rotate through the revolving doors of incarceration, homelessness, and hospitalization — regardless of where jails are sited. This is a generational opportunity, and we must seize it together.”

Asked to clarify if that meant Stringer actually supports building borough-based jails, spokesperson Tyrone Stevens said, “We think there is a need for new, modern borough-based facilities that come with an airtight commitment to invest more in communities. We also think the proposed facilities can be smaller in scale and hope the final plan reflects these important priorities.”

Diaz Jr. is the only candidate that is outright opposed to the current plan, but his objection is based on the choice of site in Mott Haven in the Bronx. That is also the only entirely new facility while the others are being built to replace existing ones.

Diaz Jr. proposed an alternate site next to the Bronx Hall of Justice, which the city rejected based on its size and other logistics. In his testimony before the New York City Council at a hearing on September 5, he called the proposal “wrongheaded” and pushed the Council to correct what he sees as the administration’s mistake. “Instead of reaching out to the community and engaging on this site selection, the administration has decided to impose a monolithic, oppressive structure adjacent to a community of reclaimed apartments, homes and schools, in the name of political expediency,” he said.

He added, “It is now up to the City Council and its members to listen to the people of this borough and adjust this proposal accordingly. Any failure to do otherwise will deleteriously alter the face of this borough for decades to come.” John DeSio, a spokesperson for the borough president, said in an email on Wednesday that Diaz Jr.’s position has not changed. Asked if Diaz Jr. believes the plan shouldn’t go forward if the Bronx site is not changed, DeSio did not provide a response, and it’s unclear if Diaz Jr. would support the current plan or a no vote on the entire proposal. (He told the Queens Daily Eagle in June that if he is elected mayor, he would reexamine the chosen sites.)

City Council Member Diana Ayala, who represents East Harlem and the part of the Bronx where the new jail is sited, had agreed to the location when de Blasio and the Council announced the locations last year. When asked about her support, Diaz Jr. has said he believes she’s mistaken and noted that she’s not from the Bronx.

Johnson, Adams, Stringer, and Diaz Jr. find themselves in somewhat tricky positions. The borough-based jails plan has proven more politically complicated than de Blasio and others may have expected. While the city’s efforts have been broadly praised by activists from the #CLOSErikers campaign who have long criticized the inhumane conditions at Rikers and helped push the issue to the forefront, there has been strident local criticism of some of the new facilities that the city proposed and a larger contingent of activists who are opposed entirely to any new jails being built.

The aptly named No New Jails NYC campaign had the support of Tiffany Caban, the upstart public defender who nearly claimed the Democratic nomination for Queens District Attorney earlier this year but lost to Queens Borough President Melinda Katz in a recount. Just last week, Democratic Rep. Alexandria Ocasio-Cortez, a progressive heavyweight, also weighed in, saying the city should not construct any new jails, particularly if there are no legal assurances that Rikers will in fact be shut down. The latter point appears to have resonated, with the mayor saying on Monday he thinks such language makes sense and NY1 reporting on Wednesday that the Council and administration are crafting an agreement to ensure no jails can be active on Rikers by 2026. The city map change application will be voted through the Council on Thursday of this week and head for approval to the City Planning Commission. Jennifer Fermino, a spokesperson for the City Council speaker, noted that the proposal had been in the works for a long time and was not prompted by Ocasio-Cortez's comments.

“Rikers Island is synonymous with mass incarceration, pain and suffering," Johnson said in a statement on Wednesday. "This land use action shows our commitment to closing all of the jails associated with Rikers. The jails will be required to close by 2026. Advocates raised the need for a guarantee, and we agreed with them completely. I am proud of the Council for this historic step, and our commitment to improving the lives of all New Yorkers.”

The Independent Commission on New York City Criminal Justice & Incarceration, former by Mark-Viverito and led by Lippman, was the architect of the Rikers closure plan and has sought to push back against No New Jails, which offered its own alternative proposal last week that would house 3,000 detainees in existing borough facilities. The Lippman Commission called the proposal “morally indefensible” and illegal, releasing a point-by-point rebuttal to the idea.

It’s unlikely at this point that the Council will reject the plan outright but there are possible tweaks that could be made to the final proposal. The three main sticking points, as the various stakeholders have indicated and as the mayoral candidates themselves seem to point out, are the size and number of beds at some of the facilities, the legal promise that Rikers will close, and whether the city will make broader community investments in criminal justice reform and social services.

A package of investments and other reforms would drive down the city’s incarcerated population further than current projections, which could require fewer beds and lead to lower building heights for some of the facilities.

The mayor said in his weekly appearance on NY1’s Inside City Hall on Monday that the Council and administration would work to add the guarantee to the proposal. “I think I have to make clear, once we build these borough-based jails and they’re going to be able to handle all of the inmates in New York City, there’s no reason to have Rikers and there’s much better ways to use that land,” de Blasio said. “Everything there should be taken down and utilized in a whole different fashion. So we’re working on a way to make that real, real clear, but I also think that the facts will speak for themselves. The new jails will be enough to take care of everyone.”