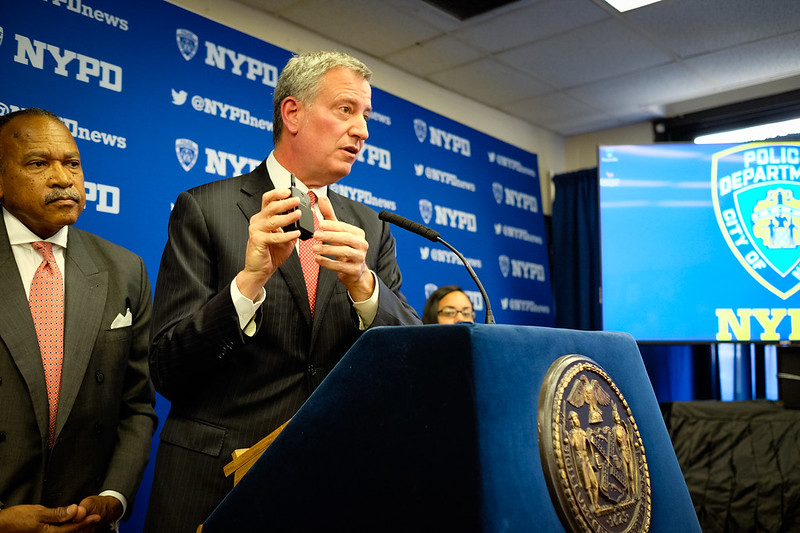 The New York Police Department quietly issued its long-sought policy on the public release of body-worn camera footage earlier this month, detailing how the department must respond to requests for footage from the public and the various exemptions that determine its release.

The policy was published to the NYPD website on October 18, one day after Gotham Gazette reported on the long delay in formulating the policy and seven months after the department finished its yearslong rollout of body-worn cameras to all uniformed patrol officers on the force. No public notice appears to have gone out from the NYPD, but a link to the policy was provided to Gotham Gazette upon follow-up inquiry on Thursday -- an NYPD spokesperson had previously said the policy would be out by the end of the month.

The policy and release of video are meant to create transparency into police interactions with members of the public, including but not limited to high-profile and controversial events – including fatal shootings – which the department refers to as “critical incidents.” It outlines how the department will provide access to members of the public, news media, and investigating authorities.

While there have been calls for a public policy for years, the issuance of one by the department will not fully quell concerns from reformers, including those who believe the NYPD should not be in charge of the footage in the first place. Mayor Bill de Blasio has repeatedly called the institution of body cameras a major step forward in NYPD transparency and accountability and argued it is leading to better policing and police-community relationships.

“The Department’s policy regarding the public release of Body-Worn Camera (BWC) footage of a critical incident enhances Departmental transparency, while balancing privacy concerns and the need to comply with federal, state and local public disclosure laws,” the two-page "operations order" policy reads.

The policy details the NYPD’s obligations for turning over footage to federal and state prosecutors investigating incidents of use of force. Within 24 hours of being informed that an investigation is underway, the department must turn over footage, it has decided. For release to the public, the policy states that the department “will decide” within 30 days, “provided that the force investigation review is completed.”

It does allow prosecutors to request, in writing, an additional 30-day delay in releasing footage to the public, which would be decided by the police commissioner. The department will also release samples of the incident and relevant footage of events that lead up to an incident, it states, likely leading to further questions about selected samples and how they may or may not provide an accurate or full picture of an incident.

Before releasing any footage, the department will take into account several factors, the policy says. For instance, whether the footage captured the inside of a home where individuals can expect privacy, any intimate images, images of injuries or dead bodies, location of a domestic violence program, or images that show an individual or officer receiving medical attention.

Bearing in mind privacy concerns, the policy states that individuals’ faces will be blurred and release may be delayed or portions of the footage may be edited or withheld to comply with state, federal, or city laws, to protect witnesses and informants, to protect a person’s right to a fair trial, to protect the identity of sex crime victims, domestic violence survivors and juveniles, to protect the privacy, life or safety of a person or to avoid undue trauma from explicit or graphic content.

The policy does note that unredacted footage may be shared for full transparency to the news media after taking those factors into consideration.

It defines a “critical incident” as one that involves use of force by officers that results in death or serious physical injury to another person or an incident where the police commissioner decides that releasing the footage will “address vast public attention, or concern, or will help enforce the law, preserve peace, and/or maintain public order.”

Recent incidents of alleged police misconduct and fatal shootings by officers have reignited concerns about how the NYPD handles and releases body-worn camera footage. Just this past weekend, two separate incidents involving policing the subway system were caught on cellphone cameras by bystanders and raised questions about when the public might see officers’ body camera footage.

In one, officers aggressively arrested a young man they believed possessed a gun. Though the man was not resisting and was seated in a subway car with his hands up, multiple officers rushed in and forcefully pulled him to the ground before arresting him. The second incident involved what officers said they stepped in to separate two groups of teenagers fighting on a subway platform. In video of that case, one officer can be seen punching teenagers unprovoked. He has been placed on modified duty pending an investigation of the incident, according to city officials.

Elected officials and police reform advocates have been in an uproar and have called for the speedy release of any footage that the officers involved may have captured on their body-worn cameras.

Meanwhile, Governor Andrew Cuomo recently ordered the addition of 500 new MTA police officers to reduce fare evasion, crack down on homelessness in the subways, and protect transit officers, but those officers are not required to be fitted with body-worn cameras, unlike their counterparts in the NYPD. As some have questioned the need for the officers, State Senator Jessica Ramos announced plans to introduce legislation to require MTA officers to wear body cameras.

Kesi Foster, a spokesperson for Communities United for Police Reform, a coalition of advocacy groups, said the new NYPD footage release policy is “a sham, designed to protect abusive officers and the reputation of the NYPD instead of the public.”

“The purpose of the policy is to be able to control the narrative related to interactions between residents and officers, not to deter or prevent abusive policing,” he said in a statement to Gotham Gazette. “While other municipalities release body camera footage within days of an incident, the NYPD plans to drag out the timeline and continue to cement police secrecy and impunity as NYC's defacto policy. The new policy makes clear that the NYPD will continue to unilaterally decide what selective footage will be released, how it will be edited and when it will be released.”

Foster cited the “selectively edited photos and footage” released by the NYPD after officers shot and killed Brooklyn resident Saheed Vassell last year. The footage, from security cameras, shows Vassell, who suffered from mental illness, holding a metal pipe and pointing it at people on the street. But it does not clearly show the officers shooting Vassell, which they did within seconds of arriving at the scene. None of those officers were equipped with body cameras, according to the NYPD. Foster said that case “is a perfect preview of how the department will use release of edited footage and photos to justify unjustifiable police action and criminalize those killed and brutalized by police.”