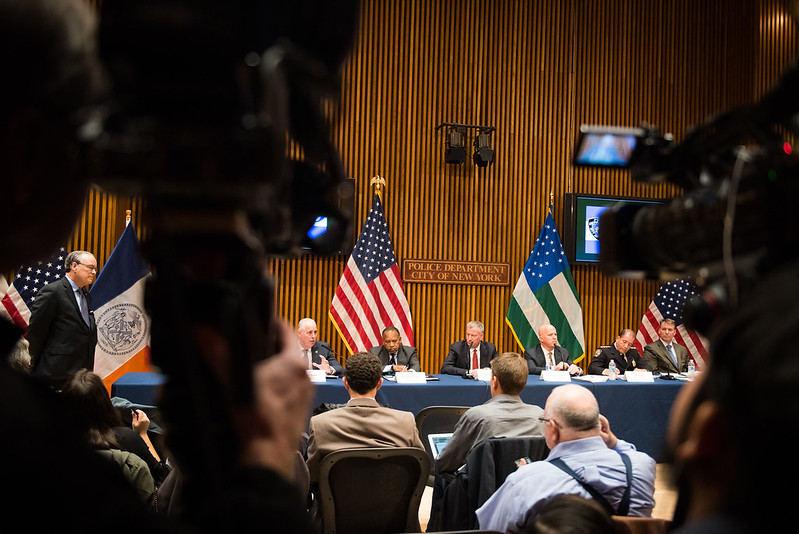 Amid the ongoing conversation about the way the NYPD handles footage recorded by officer-worn body cameras, more details have surfaced about the reasons the department gives for delaying or denying requests made by misconduct investigators for key pieces of video.

Gotham Gazette recently reported that while prosecutors in district attorney offices get full body-worn camera footage directly from the arresting officer following an arrest, police watchdogs often experience significant delays in obtaining video from the NYPD, if the footage is handed over at all.

Over the course of many months running, roughly a third of Civilian Complaint Review Board (CCRB) investigations have outstanding body camera footage requests. More than half of all footage requests made by the CCRB are pending for more than 30 days (some even longer), which CCRB officials say has contributed to a growing backlog that threatens to derail ongoing investigations.

The CCRB is a civilian agency with Board members appointed by the mayor -- some recommended by the police commissioner or City Council -- and jurisdiction to investigate and prosecute allegations of officer misconduct when the claims involve excessive force or abuse of authority, among others.

The police department’s body-worn camera program hit full implementation across the entire force earlier this year, but the NYPD just last month issued its first “operations order” that indicates how camera footage is reviewed and disseminated to the public or prosecutors. The CCRB is not mentioned in the official policy.

NYPD officials have said, for requests made by the public or the CCRB, the department must edit the footage in order to comply with privacy provisions within the state’s public disclosure laws. Tracking down the relevant footage from any police body cameras on the scene of an incident, and ensuring it is edited to prevent depicting legally protected information, can contribute to the delays, department officials say.

Yet in a July memo to the CCRB, recently obtained by Gotham Gazette, CCRB Director of Quality Assurance and Improvement Olas Carayannis describes additional reasons the NYPD has given to outright deny body camera footage requests. The conditions discussed in the memo may also illuminate causes for the consistent delays in releasing footage to the CCRB, which the NYPD says it is working on and the mayor’s office told Gotham Gazette it will review. There is a City Council oversight hearing on the body camera program set for Monday.

Earlier this fall, NYPD spokesperson Al Baker told Gotham Gazette body camera video could be edited to shield the identities of victims and survivors of sex crimes, which he says the state’s civil rights statute protect. He also said footage can be redacted or omitted to remove images of confidential medical treatment, protected under federal law, or “other prisoners in a cell whose arrest may be sealed.” At a CCRB board meeting in September, Board Chair Fred Davie said there are also cases where the NYPD has withheld footage because it captures the face of a minor.

“With all NYPD patrol officers now outfitted with body-worn cameras, the NYPD collaborates closely with the CCRB to provide footage as expeditiously as possible,” Baker wrote in an email to Gotham Gazette in November. In March, Mayor Bill de Blasio and Police Commissioner James O’Neill announced the completed rollout of 20,000 body cameras to rank-and-file officers.

“That practice is constantly being fine-tuned to offer even faster turnarounds considering that a single request from the CCRB, about a single policing encounter, can mean that lengthy videos from dozens of officers must be carefully reviewed and possibly redacted,” Baker said.

The memo from Carayannis goes further, laying out other reasons the NYPD has given to CCRB investigators, some of which outline grounds for completely denying footage requests in addition to pointing to causes for delays.

Between February 2018 and July 2019, the NYPD has reserved the right to withhold body camera recordings when there is an ongoing investigation by the Internal Affairs Bureau or another body, Carayannis noted. During that time period 41 cases were denied on that basis, six of which “were being investigated by the Force Investigations Division, which often investigates high-profile media cases involving force allegations that are also the CCRB’s jurisdiction,” the memo reads.

“Waiting for the Force Investigations Division to complete its investigation limits the CCRB’s ability to independently investigate these complaints,” Carayannis wrote. CCRB investigations must be completed within an 18-month statute of limitations.

The memo also states that in March 2018, the NYPD began refusing to provide the CCRB footage of incidents when they involved an arrest that was later sealed (a fact WNYC reported in July). “The NYPD considers the entire incident sealed in these instances, and thus all videos related to that arrest become unavailable to the CCRB,” the memo states.

It says, “The NYPD currently has a blanket policy of denying all BWC [body worn camera] requests that are in any way related to a sealed case,” pursuant to the state’s Criminal Procedure Law. In the memo Carayannis reports 81 CCRB requests that had been altogether denied because they were associated with a sealed arrest between March 2018 and July 2019.

Complaints can be made against officers for conduct that takes place during an arrest later sealed, and body camera footage could be essential in those investigations. Sealing records is meant to protect the reputation of an individual who may have had criminal charges dropped or ones that were very minor to begin with.

In April, the New York Supreme Court determined it was illegal for the police department to “us[e] any documents” connected with a sealed arrest, according to the memo. But Carayannis’s memo raises concerns that NYPD “members of service” (police officers) may continue to view body camera footage related to a sealed arrest, despite the ruling.

Carayannis wrote, “the CCRB is aware of multiple instances where the CCRB was denied access to video footage pursuant to [the Criminal Procedure Law], yet the [officer] was able to view the video prior to his/her CCRB interview.”

Video request denials because of a sealed arrest can compound the effect of other obstacles the CCRB says it faces in receiving and analyzing evidence from BWCs. “The backlog in BWC requests will cause the number of BWC videos unavailable to the CCRB to increase drastically, because the likelihood that an arrest is sealed rises with the length of time since an arrest,” the memo stated.

Another reason given by the NYPD to the CCRB for denying certain video requests is the presence of a minor in the sought-after recording. Baker has noted that the depiction of juveniles is a consideration in processing footage requests, writing in a November email, “Our policy for release is guided by State law and ensures that sensitive information involving juveniles or sex crime victims, among other things, is protected.”

Carayannis’ memo expands upon that description, explicitly citing it as a reason given, not only for potential delays in delivering footage, but for wholly refusing requests. Between March 2018 and July 2019, 82 video requests made by the CCRB were denied because of the presence of minors under the age of 18, which the police department said was required under the state’s Family Court Act, according to the memo.

“Ensuring the city’s police oversight agency has the tools it needs to investigate this misconduct is the best way to protect” young people captured in body camera video, he added.

Despite repeated attempts, NYPD representatives did not provide comment specifically for this story, particularly with regard to questions about denying video footage records requests because of ongoing IAB investigations, sealed arrests, or the presence of a minor.