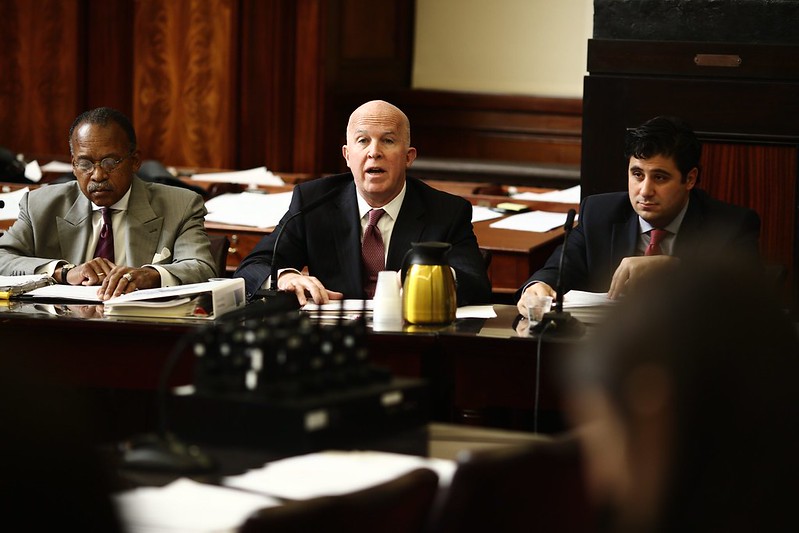 The New York City Police Department recently issued the first protocols for the public release of footage from officers’ body-worn cameras, and with them the first explicit mention in departmental policy that the footage may be subject to editing and redaction prior to release.

The policy raises new and recurring questions on the controversial topics of who controls the video and how it is handled, some of which the NYPD has responded to with information about its internal footage-review unit.

On October 18, seven months after Mayor Bill de Blasio and Police Commissioner James O’Neill announced the completed roll-out of the city’s body-worn camera (BWC) program to more than 20,000 uniformed officers, the department published an “operations order” outlining the parameters for reviewing and releasing video of so-called “critical incidents” -- interactions with the public where police force ends in death or serious injury​.​

Critical incidents can also include events that have captured “vast public attention, or concern,” the release of which “will help enforce the law, preserve peace, and/or maintain public order.”

It gives the police commissioner broad authority in determining whether footage should be made public and the extent to which it is censored or redacted in compliance with federal, state, and local law. In multiple instances the new policy makes reference to public safety and privacy concerns, some of which department officials say are protected by state law.

Through the new policy, the NYPD reserves the right to delay or completely forego releasing footage based on considerations like protecting confidential sources, the identity of victims and survivors of sex crimes and domestic violence, or the privacy, life, or safety of an individual -- among many others. In all instances the document leaves the discretion to edit or redact footage within the police department.

After review and possible editing, “the Department will release representative samples of the BWC video(s) depicting the critical incident, as well as, any salient events leading up to the event. Extraneous and/or redundant material may be omitted,” the order reads. “The footage will be redacted (e.g., faces of involved individuals will be blurred, etc.), as appropriate, prior to being released to the public.”

The policy says the NYPD will make a decision about when to release footage within 30 days of a critical incident, but makes no guarantees about the release.

In recent interviews with Gotham Gazette, police officials cited footage editing as one of the reasons for delaying the release of body-worn camera video to the Civilian Complaint Review Board (CCRB), which often requests the footage to assist in its investigations of alleged police misconduct.

Representatives of the CCRB, a civilian agency with jurisdiction over excessive force claims and other types of officer wrongdoing, say it relies on BWC video to substantiate misconduct allegations. Gotham Gazette recently reported that while roughly a third of CCRB investigations have BWC footage requests pending with the NYPD, the department releases unedited footage of arrests directly to prosecutors in district attorney offices almost immediately upon completing a tour.

Al Baker, an NYPD spokesperson, gave the examples of the state’s Civil Rights Law Section 50-b -- which he says requires the department to edit videos involving sex crimes -- and legal restrictions to publicly depicting confidential medical treatment, as reasons for the delay in responding to the CCRB.

“The CCRB disagrees with the NYPD’s interpretation of the law. We are working with the Department on a solution to these issues that satisfies all parties,” wrote Ethan Teicher, CCRB press secretary, in an email. The CCRB believes that unless there is “significant change” in the police department’s practices with respect to the agency’s video requests, the backog will continue to build and further impair misconduct investigations, according to a September tweet.

While listing the broad privacy and legal considerations the NYPD makes in determining whether a body camera video will be edited prior to release to the public, the new policy does not provide details about who makes the decisions to edit footage, what the full editing and release process looks like, and what ultimately gets redacted, omitted, or censored.

According to Baker of the NYPD, that is done by a centralized Body-Worn Camera Unit within the department’s Legal Bureau, housed at police headquarters in lower Manhattan. (Baker says the unit processes footage for both the CCRB and for public release. The public release policy makes no reference to the CCRB.) The BWC Unit is headed by James Conroy, Director of Litigation, Support and Transparency, a civilian member of the police department, and is made up of a combination of civilian and uniformed members, Baker said in a Wednesday phone interview.

Those details and the new operations order around public release of footage raise questions about potential conflicts of interest in editing body camera footage, including for officers under investigation for misconduct.

An original copy of the footage is kept saved in an NYPD database for one year, according to the department’s patrol guide, regardless of any editing to fulfill a public or CCRB request. The new public release policy states, “Unedited footage of a critical incident will be maintained, and released, to an appropriate investigating authority upon request.”

In January 2018, NY1 reported receiving more than 300 BWC videos through a Freedom of Information Law request from the city’s pilot program recorded during 2014 and 2015, which were “heavily redacted, blacking out interactions between the public and police.”

Baker did not respond to questions about whether there is a process of approval or feedback from people outside the BWC Unit, like the police commissioner or another top department official, before video is released to the public or to the CCRB.

He also did not immediately provide more information on the BWC Unit, like the size of its staff, the breakdown of its civilian and uniformed membership, and how many lawyers have been assigned to process the footage. It remains unclear whether a legal expert is assigned to each video request where footage must be censored or redacted pursuant to the law, and if there are written guidelines for that type of editing.

“The NYPD has assigned additional personnel to the body-worn camera unit to address the backlog of requests,” Baker wrote in an October email, referring to both CCRB requests and ones made by members of the public under the state’s Freedom of Information Law.

A memo from Olas Carayannis, CCRB Director of Quality Assurance, to the CCRB board in July stated, “While the Department indicated that it allocated four additional people to review BWC requests, the CCRB is not confident that this will address the backlog in a way that will allow the Agency to complete its investigations in a timely manner.”

“As of June 26, 2019, the CCRB had 788 unfulfilled requests for BWC footage from IAB, some of which had been made months earlier,” wrote Carayannis.

On Monday, the City Council Committee on Public Safety, chaired by Queens Democrat Donovan Richards, will hold an oversight hearing to examine the body camera program after its first months of full implementation. Along with providing new information about the CCRB backlog and the NYPD footage-editing process, the hearing may illuminate other questions like how officers are adapting to turning on cameras during interactions with the public, as required by departmental policy, and what the department is doing to ensure officer compliance with protocols related to the new technology.