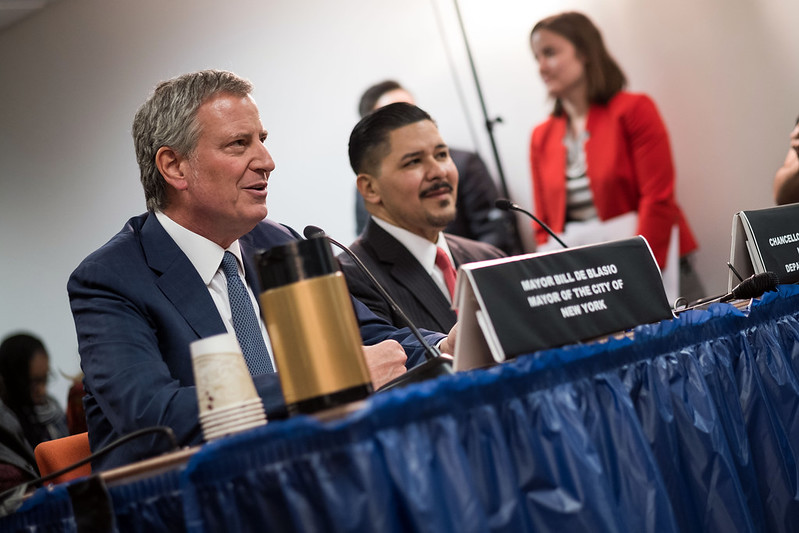 Just six months after the state Legislature approved a three-year extension of mayoral control of the New York City school system, stretching well past the end of Mayor Bill de Blasio’s term, the state Assembly is holding a hearing later this month on whether the mayor’s stewardship has been effective.

The hearing will be held in New York City on December 16 by the Assembly’s education committee and will be, according to a public notice, the “first in a series of hearings and other informational forums throughout the City of New York to assess the effectiveness of mayoral control of the New York City School District and hear from stakeholders on the ways to address the inequities in our schools and improve student performance.”

De Blasio had an easier time getting an extension, and a longer one at that, of mayoral control this year under a Legislature where both houses were under Democratic control for the first time in a decade, compared with past years when Republicans who held the Senate used it as leverage to extract concessions, chiefly related to charter-school friendly policies, and often agreed to only one additional year at a time. But the latest extension nonetheless came with some conditions.

Among the changes, which the de Blasio administration says it is fully implementing, were increasing the membership of the Panel for Educational Policy from 13 to 15, with one member appointed by Community Education Council presidents and the other by the mayor. The PEP approves certain major Department of Education contracts and policies, and the mayor will now appoint nine of its members, up from eight. The two new members have yet to be appointed. Under the changes agreed to this year, the mayor will have to give a ten-day notice and a written explanation before removing a PEP member.

The city must also appoint a task force to issue recommendations on elections to Education Councils, of which there is one for each of the 32 local school districts and four with citywide purview; allow CECs to issue non-binding votes on school building utilization changes; and make changes to the Chancellor’s Regulations to give parents a greater say in hiring principals and superintendents – for instance, CECs will be able to meet with candidates that the Chancellor is considering for superintendent and provide their feedback before the appointment is made.

“Mayoral accountability is working - graduation and college enrollment is up, dropout rates are down, and Pre-K for All is narrowing the achievement gap,” said Jane Meyer, a spokesperson for the mayor, in response to a request for comment about the upcoming hearing. “We’re fostering supportive learning environments that empower families, and delivering Equity and Excellence to every child, no matter their zip code.”

When asked, Meyer did not say whether Schools Chancellor Richard Carranza would testify on the administration’s behalf at the December 16 hearing, and while she did say the new changes were being implemented by the DOE, she did not respond to questions seeking clarification.

The Assembly education committee is chaired by Assemblymember Michael Benedetto, a Bronx Democrat. In a phone interview, Benedetto said the hearing is the beginning of a process of ongoing assessment of the current mayoral control system.

“Maybe there are changes we can make to the system that we have right now, to make it better,” he said Tuesday. “When we made some minor changes to the school governance law, we also made at that time a promise among ourselves that we would going forward take a look and see, are there better ways to govern the schools of the City of New York? So to that end, we made it a point of agreement that we will meet, that we will have hearings, that we will have roundtables, that we will actively seek out and look and investigate other models to see if what we’re doing is in the best interest of communities and most importantly children.”

Benedetto said he had “no expectations” of the de Blasio administration’s testimony and that the hearing is more of a fact-finding exercise. “I think it’s quite possible that every issue under the sun is gonna come on up if it involves education,” he said. He does, however, hope to hear from parent and teacher groups, educators, and elected officials about the pros and cons of mayoral control, which, under Mayor Michael Bloomberg, replaced the old Board of Education localized system and has been renewed several times since. “Come 2022, we can formulate a piece of legislation that we think will be best for the City of New York and maybe that is just what we have now and maybe it’s not. So we’re looking,” Benedetto said.

Gotham Gazette also reached out to other elected officials who would seem likely to attend or be particularly interested in the hearing. A spokesperson for State Senator John Liu, who chairs the Senate’s New York City education committee, acknowledged a request for comment but did not respond to follow-up inquiries.

New York City Council Member Mark Treyger, who chairs the Council’s education committee, said he plans to attend the hearing and push for greater accountability over the schools system. “The DOE is the largest city department, it takes up about a third of the entire city budget, and yet the City Council lacks a lot of critical authority over this department,” he said, noting that the Council cannot make appointments to the PEP, does not have advice and consent power over the chancellor’s appointment, and cannot pass laws affecting DOE functions except for requiring certain reports. The Council, he said, is relegated to exercising its power during annual budget negotiations to force the city to institute needed reforms. “It speaks to a real imbalance in terms of authority and proper oversight over a critical agency,” he said.

The mayor’s oft-examined six years at the helm of city schools have indeed seen the improved metrics mentioned by Meyer, and often touted by de Blasio and Carranza at legislative hearings and elsewhere (the two testified together at a March 15 hearing on mayoral control held by the Senate, a few months before the latest extension was granted).

But there have been stumbles along the way. The much-touted Renewal Schools program, which spent nearly $800 million over four years on struggling schools with limited results, was scrapped earlier this year for a new approach. The school system, which serves more than 1.1 million students, remains deeply segregated and the mayor has failed to articulate a comprehensive strategy to tackle the problem. A task force he created for that purpose released its final report in August, recommending, among many other things, that all Gifted and Talented programs, where white students are overwhelmingly admitted, be replaced for universal enrichment programming.

De Blasio has also unsuccessfully sought to get rid of the Specialized High School Admissions Test (SHSAT), which requires state legislative action for the three largest of the eight schools that use it for admissions, in order to diversify the student population at the city’s specialized high schools where black and Latino students are severely disproportionately underrepresented. Chancellor Carranza has vowed to keep pushing that proposal, though de Blasio has said he is back to the drawing board and planning a new approach next year, while also pledging to hold a series of conversations based on his task force’s reports about how to integrate the broader school system.

Assemblymember Nicole Malliotakis, a Staten Island Republican who challenged de Blasio when he ran for reelection in 2017, welcomed the Assembly hearing as an opportunity to grill the mayor’s administration. She is new on the education committee and noted in a public statement that she has been pushing for a hearing since before the budget was decided earlier this year.

She said in part that “critical questions still remain about inappropriate spending of precious education dollars, as well as the dismantling of school discipline under de Blasio. I made a point to have hearings on mayoral control because under de Blasio it has been terrible. Now that we have these hearings, I urge my constituents to speak out and to ensure that their taxpayer money is being spent properly.”

Note - this article has been updated to note that the New York City education committee is no longer a subcommittee.