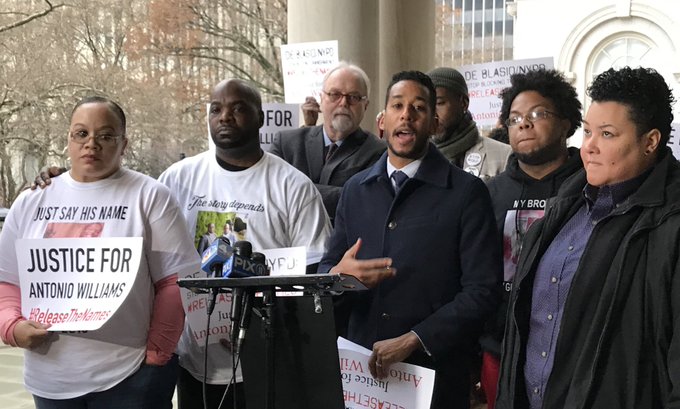 Antonio Williams’ parents were not allowed to see their son in the hospital before he died from police gunshot wounds he sustained while attempting to flee a police stop in late September. Two-and-a-half months later, they are seeking footage from the body cameras worn by the officers involved that night and, in the process, are testing the NYPD’s new policy for publicly releasing video of what it calls “critical incidents,” including when civilians are killed by police.

NYPD Officer Brian Milkeen was also shot and killed by NYPD officers during the altercation as he wrestled with Williams. Many details of the event remain murky but a police department representative said Monday the NYPD expects to release footage of the incident "in the coming week."

At a tearful press conference on the steps of City Hall Monday, Williams’ family was joined by Public Advocate Jumaane Williams (no relation), members of the City Council, and the families of other black men killed by police to seek details from Mayor Bill de Blasio and the NYPD about the September shooting. Despite a recently-published policy designed to clarify and expedite the process of releasing footage to the public, Shawn and Gladys Williams, Antonio’s father and stepmother, say they have not been shown body-camera video of the events leading to their son’s death.

“At the end of the day, we just want the truth. We want to find out what happened that night, why it happened, what could have been done to prevent it happening,” said Shawn Williams. Shawn and Gladys were joined by Antonio’s brother, Justin, who wore a shirt that said “My Brother, My Guardian Angel.” Others held signs saying “Justice for Antonio Williams #ReleaseTheNames” and “De Blasio/NYPD Stop Blocking Transparency, Justice for Antonio Williams.”

On September 29, Mulkeen, in plainclothes, approached Antonio Williams in front of the Edenwald Houses, a NYCHA complex in the northeast Bronx, then chased and wrestled him to the ground after Williams fled, according to then-Police Commissioner James O’Neill. Other officers were also in pursuit. According to the police department, Mulkeen can be heard via the not-yet-released body camera recording yelling, “He’s reaching for it. He’s reaching for it,” as Williams is, according to the NYPD, seen reaching toward his waist. Both Mulkeen and Williams died by police gunfire. Officers on the scene discharged 15 rounds, O’Neill said.

Police reported finding a handgun on the scene belonging to Williams, which had not been fired. A witness said that Williams was waiting for a cab when he was approached. Advocates say that in New York State it is not, by itself, illegal to run from the police.

The police department has not released details to the Williams family or the public about what Williams was being stopped for or whether he was suspected of a crime while the events were unfolding. It is also unclear whether officers identified themselves as police before approaching Williams.

Jonathan Moore, a lawyer with Beldock Levine and Hoffman LLP who is representing Williams’ family, said they have requested these details, as well as the names of the officers involved and any body-worn camera footage recorded that night, which could illuminate what happened and whether police officers acted appropriately and within the law. Moore’s firm submitted a request for the body-camera footage and other details through the state’s Freedom of Information Law on Monday, Moore said.

“We are concerned that that information is being covered up,” Moore said at the press conference. “Let’s see some transparency here. Let’s level the playing field. Let’s have the evidence about what happened.”

On October 18, the NYPD quietly published a long-sought policy outlining how the department would approach publicly sharing body-worn camera footage of “critical incidents” -- police interactions where the use of force resulted in death or serious injury, or where releasing body camera video would “address vast public attention, or concern.” The policy came months after O’Neill and de Blasio announced the full implementation of the body-worn camera program. It was originally piloted as a way to hold officers accountable after a judge found the NYPD had for years unconstitutionally targeted people of color with stop-and-frisk policing. As of this fall, roughly 24,000 police officers have been equipped with cameras.

The shooting deaths of Mulkeen and Williams appear to fall squarely within the NYPD’s definition of a “critical incident,” and participants at the press conference Monday, organized by Communities United for Police Reform, an advocacy coalition, said the department is in possession of video that could provide answers and closure for Williams’ family.

“We don’t even know what happened,” said Brooklyn City Council Member Antonio Reynoso. “We don’t know whether the officers did anything wrong, whether Antonio did something wrong. We don’t know anything. We’re standing here blind. The city has all the information and refuses to give it to us.”

The new policy says “the Department will decide when to publicly release BWC footage of a critical incident within 30 calendar days, excluding any non-disclosure period(s), provided that the force investigation review is completed.” It does not say whether it applies to events retroactively and does not guarantee footage will be published, leaving that decision entirely within the police commissioner’s discretion.

In an email to Gotham Gazette, police spokesperson Devora Kaye wrote, “The NYPD is committed to releasing footage of critical incidents captured by body-worn cameras within 30 days, with limited exceptions, while also balancing privacy concerns, protecting against compromising criminal investigations, and the need to comply with federal, state and local disclosure laws.”

“We expect to release the video from this incident in the coming week, and the Department will be sharing additional videos for other police involved shooting incidents in the coming weeks and months,” she wrote of the September 29 shooting.

Last month, under the new policy, the NYPD posted a 14-minute video of the fatal shooting of Gregory Edwards by police on Staten Island.

When asked whether the new policy should apply retroactively to Williams’ death and if Mayor de Blasio had discussed the matter with the police department, a mayoral spokesperson deferred to the NYPD.

A spokesperson for the Civilian Complaint Review Board says the watchdog agency has received no complaints stemming from the shooting, which is required in order to open an investigation.

The increasingly vocal public outcry around Williams’ death is setting up the September shooting to be one of the first tests of how the department will deal with critical incidents since the policy was released.

“I call on Dermot Shea, the new police commissioner: this is the first item on your plate,” said Moore on Monday. “We’re asking simply that there be full disclosure so that we can determine whether justice has been done in this matter.”

City Council Member Brad Lander, also a Brooklyn Democrat, said the police department will need to be more transparent about the application of the policy, especially in sharing video to the families of people killed by police. “A policy is written precisely to go out of the realm of implication into the realm of specific knowledge, and it is not clear. It does not obligate the NYPD to share [footage] with the family,” he told Gotham Gazette after the press conference.

Shaping the narrative and controlling the information around civilian deaths are hard and enduring issues for the loved ones of people killed by police. The new body-camera footage policy says the police department will release “representative samples” of the video but makes no commitment to publish footage completely or without redaction.

“Before they bring the evidence out, they want to tell it their way,” said Gwen Carr, Eric Garner’s mother, at the press conference. “But that officer [Brian Mulkeen] may have died for other reasons, we don’t know. They want to make Antonio the scapegoat like in so many other cases.”

Speaking the day after the shooting, then-Police Commissioner O’Neill told reporters, “Make no mistake, we lost the life of a courageous public servant solely due to a violent criminal who put the lives of the police and the people we serve in jeopardy.”

“We just need to know,” said Gladys Williams, Antonio’s stepmother. “It has been two-and-a-half months. It is hard to spend the holidays without our son.”

Note: this article has been updated to say the Civilian Complaint Review Board has not received a complaint in this matter.

[Update (Sunday Dec. 15): on Friday, Dec. 13, the NYPD released edited body camera footage in this case. Just prior to the release of that video, family of Antonio Williams and others held a press conference to criticize the mayor and NYPD, saying in an accompanying press release: "Antonio Williams’ father, stepmother and brother – joined by elected officials and police accountability advocates – rallied in front of NYPD headquarters to protest Mayor de Blasio and the NYPD’s refusal to provide Williams’ family with full access to unedited police body camera footage of the September 29th Bronx police killing of Antonio Williams and Officer Brian Mulkeen. The rally took place after the Williams family was able to preview an NYPD-produced video that is expected to be released publicly today."]