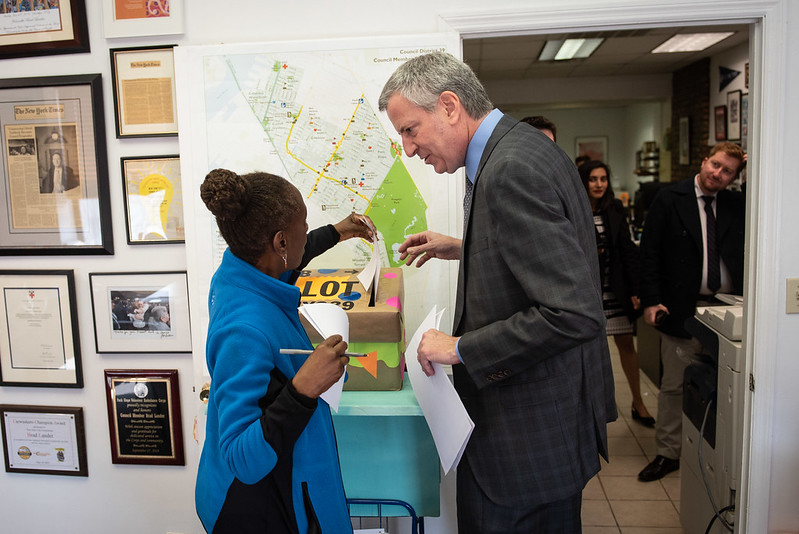 The New York City Civic Engagement Commission, established through a charter amendment approved by voters in 2018, is tasked with crafting a new citywide participatory budgeting program modeled after the City Council’s efforts to engage New Yorkers in funding local projects. A plan is required to be in place by July 1, the start of the next city fiscal year.

But Mayor Bill de Blasio’s $95.3 billion preliminary budget proposal for next fiscal year, released mid-January, allocates no funding to the program and the commission’s members worry that it is already falling behind.

The City Council has for years put aside millions of dollars for participatory budgeting, allowing district residents to decide how and where to spend pots of funding for specific community improvements. Last year, the program was implemented by 32 of 51 Council members in their districts – this year, it is 33 – and each dedicated roughly $1 million (sometimes up to $2 million) for various capital projects. Ideas are solicited from the public and can cover everything from bike lanes to public restrooms to park renovations and school equipment.

A 2018 Charter Revision Commission created by de Blasio proposed that a citywide version of the program should be put into place and overseen by the newly created 15-member Civic Engagement Commission (CEC) – eight of its members are appointed by the mayor, two by the City Council speaker, and one each by the five borough presidents.

The CEC has held several public meetings since being named but it has made little progress on the citywide participatory budgeting program except for creating an advisory committee. Members of that committee joined with a coalition of advocacy groups on Tuesday, signing a policy memo to the mayor calling on him to set aside at least $500 million for a citywide participatory budgeting program.

Among the groups were BetaNYC, Civic Hall, Girls for Gender Equity, IntegrateNYC, New York Civic Engagement Table, and the Participatory Budgeting Project, as well as Council Member Brad Lander, who first proposed the idea of a civic engagement commission in a bill before the City Council.

The memo carries a sense of urgency, warning the mayor that the CEC’s charter mandate is “at risk of failure” if he does not allocate the requisite funds. The coalition noted that the mayor, in his aborted presidential campaign, proposed putting $1.65 billion towards a national participatory budgeting program. “Now is the time for an equally bold Mayoral commitment, to ensure that citywide PB is a successful legacy program, not an unfulfilled promise,” the memo reads.

The advocates also pointed to other cities that currently have PB programs with a far smaller population. Paris, for instance, with a population of about 2.1 million, allocates a little more than $111 million annually to citywide, district, and school level projects, similar to Madrid. And Mexico City’s Citizen Participation law, the memo says, mandates 3.25% of the total city budget for PB in 2020, about $76 million, increasing by 0.25% each year until it comprises 4% of the city’s budget in 2024. “To reach the same 4% as Mexico City, New York would be allocating billions of dollars!” the memo reads.

The CEC members themselves acknowledged at a public meeting on January 29 that the commission could miss the deadline for launching the new citywide participatory budgeting program. “We're going to implement a citywide program by July 1st, we're sort of already behind schedule,” said Commissioner Annetta Seecharran, who is the executive director of Chhaya CDC.

While the city charter revision requires the commission and several tasks by it, including the participatory budgeting program, it does not mandate any funding from the city.

The demand for money toward the program comes at a tricky time for the city as it contends with potential budget cuts to Medicaid funding from the state, among other possible challenges. Last month, the mayor proposed a relatively conservative preliminary budget with few new initiatives, taking a wait-and-see approach as the state budget is negotiated ahead of its April 1 deadline. De Blasio, working with the City Council and other stakeholders, is likely to increase spending in his executive budget plan and the adopted budget. The city’s Office of Management and Budget often projects a lower revenue forecast to give city officials more flexibility over the budget season.

The mayor’s office is reviewing the advocates’ request, according to a spokesperson.

“The Mayor has long-hailed participatory budgeting as an important avenue for civic engagement that enhances democracy in New York City,” said Jose Bayona, a mayoral spokesperson. “This Administration is committed to extending access to participatory budgeting citywide through the work of the Civic Engagement Commission and in partnership with advocates, volunteers, elected officials and community members.”