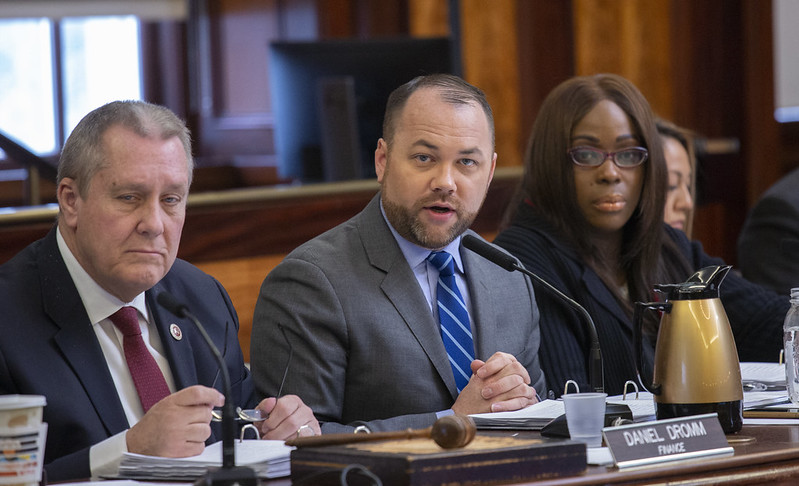 The City Council held its first hearing on Mayor Bill de Blasio’s $95.3 billion preliminary budget on Monday, calling on the administration to find more agency efficiencies and savings and to fund the Council’s own priorities, while also asking for a contingency plan should potential state budget cuts and cost-shifts go through this year.

The mayor’s budget proposal this year increases spending by $2.5 billion over last year’s adopted budget, and reflects a $20 billion increase since he took office six years ago. Though the mayor did not include many new initiatives when he released his budget proposal in January, he has since announced several that could add hundreds of millions in spending.

This year’s budget is expected to be particularly challenging for the city as the administration faces $1.4 billion in cuts, cost-shifts, and unfunded mandates from the state, the highest in the last six years. Most of the potential cost-shifts stem from a proposed Medicaid overhaul that Governor Andrew Cuomo proposed in his executive budget, though state budget officials have argued that the mayor’s estimates are overblown and much is to be determined as the state’s Medicaid Redesign Team does its work and the governor and legislators negotiate the new state budget due by April 1. The next city budget is due by July 1.

Economic growth has also begun to slow and as the novel coronavirus roils the financial markets, it could threaten the city’s economy, particularly if it hurts tourism.

On Monday, City Council members and de Blasio administration officials seemed to acknowledge that they would not be able to beat back all of what Cuomo has outlined. “What we need to hear from the administration today is a plan,” said Council Speaker Corey Johnson to de Blasio budget director Melanie Hartzog. “We need the mayor to reassure us that if these shortfalls materialize, then the city is prepared to absorb them into our budget with minimal impact to crucial city services.”

But Hartzog, director of the Mayor’s Office of Management and Budget, said the city may have to make tough decisions. She reiterated at Monday’s hearing the de Blasio prediction that Cuomo’s Medicaid shifts would be “devastating,” particularly to NYC Health + Hospitals, the municipal health system. “We cannot absorb that level of cuts,” she said, noting that it would necessitate possible reductions in social services and after-school programs. “Unfortunately, everything is on the table,” she said.

Hartzog noted that the city has already spent roughly $3.8 million in repsonse to the coronavirus outbreak and while she could not be sure what the overall cost to the city might be, said that the city spent about $20 million on the Ebola scare of a few years ago, which might be a good initial benchmark to think about.

Council Member Daniel Dromm, who chairs the Council’s finance committee, said there are certain risks “that are inexplicably not addressed by the mayor’s preliminary budget even though they are predictable and necessary to continue to meet the needs and priorities of New York City.”

That includes underbudgetting certain costs. He noted, for instance, that the city has spent an average of 28% more than it budgets on overtime since 2015, but hasn’t taken steps to correct the gap. Projected spending on so-called Carter Cases, private school placements for students with special education needs, was also lower than should be expected, he pointed out – the Department of Education’s fiscal year 2021 budget includes $405.6 million for Carter Cases, he noted, which is about $134 million less than the budget for the current fiscal year. The budget also does not include a needed $64 million for pupil transportation and leaves out $75 million that the Board of Elections needed to implement early voting last year, he said.

As Dromm pointed out, the mayor in his State of the City speech announced several initiatives that would require more funding including the expansion of 3-K, a home visit program for new parents (expected to cost $43 million next fiscal year, an amount that wasn’t in the mayor’s preliminary budget), and ignored the City Council’s discretionary priorities, which cost about $450 million in the current fiscal year. The budget also does not provide funding for $215.7 million in one-time funding that the Council fought for last year, Dromm said.

On a promising note for the administration, Council Member Vanessa Gibson, who chairs the Council’s capital budget subcommittee, praised efforts to make the city’s capital budget process more transparent and to improve how funds are spent on capital projects over the course of the four-year, $85.5 billion capital commitment plan. She noted that the administration has started reporting on projects that are funded in the out-years after the plan, aligning more closely with the city’s ten-year capital strategy.

Over the course of three hours, Council members questioned the administration on a myriad of issues including homelessness spending, nonprofit contracting, and funding for senior services, cultural affairs, public housing, overdose prevention, special education, and more.

Johnson was particularly focused on the city’s spending on homelessness. He cited the recent release of the Council’s comprehensive strategy to end the homelessness crisis, asking why the de Blasio administration could not act to increase the value of rental vouchers to fair market rates to help people stay in their homes and out of shelter and whether the city’s massive increase in shelter spending was money being spent in the right ways.

Hartzog said the administration agrees with the goal but could not act on its own. “We can’t without risking losing state and federal funding,” she said. She also pushed back on Johnson’s suggestion that a single deputy mayor oversee housing and homelessness.

Though the city faces major threats to its budget, the mayor did not institute a Program to Eliminate the Gap (PEG), which he did last year to mandate targeted savings at specific agencies. Budget watchdogs have long said the administration needs to find more actual agency efficiencies rather than savings through re-estimates in spending and accruals (not hiring for positions that are budgeted). Johnson questioned whether the mayor was planning a PEG as he looks toward his April executive budget plan.  “Can’t rule it out at this point,” Hartzog replied.

Following the administration’s testimony, the Council heard from Comptroller Scott Stringer and experts from the Independent Budget Office, a city-funded fiscal watchdog. Stringer released his analysis of the mayor’s preliminary budget last week, and called for the administration to increase the ratio of reserves to total annual spending – the budget cushion – to 15%. The cushion was 11% in the current fiscal year, which Stringer has repeatedly said would be insufficient in the event of a recession. Stringer also highlighted his recent addition of the office of ThriveNYC to his "agency watch list," which already included the city's department of education, correction, and homeless services, and fielded questions on the subject. He explained that the mental health care office led by First Lady Chirlane McCray has not provided a detailed, transparent budget and has not shown sufficient indication that its spending, roughly $200 million per year, is producing results.

Over the next month, the Council will continue to delve into the budget, examining spending plans at agency-specific hearings. After the Council presents its response to the mayor, he will issue his executive budget, which will be the subject of another round of hearings before the final budget is agreed to in closed-door negotiations.