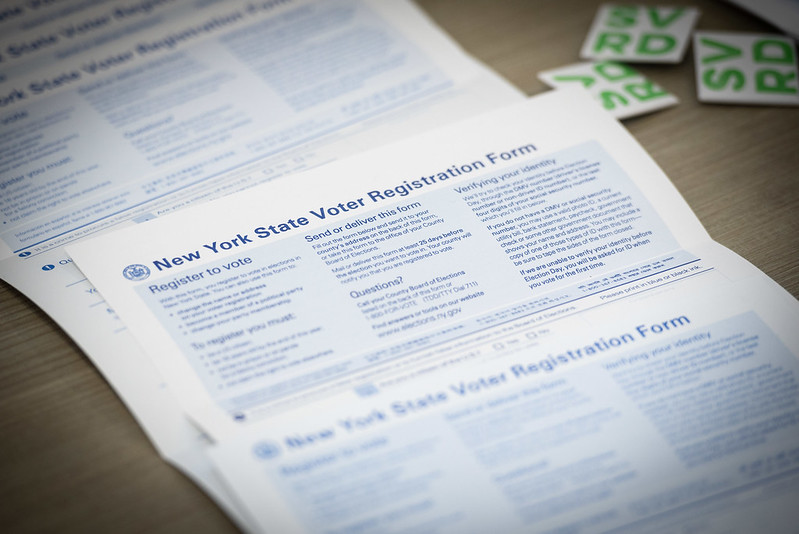 As fears of the spread of the novel coronavirus (COVID-19) mounted, but before Mayor Bill de Blasio made the monumental decision to close the city’s schools for at least five weeks, New York City government held its second annual Civics Week to encourage civic participation and voter registration among students.

After a new law passed last year to allow it, the city focused this year’s Civics Week on pre-registering 16- and 17-year-olds to vote, beginning with such a voter registration drive for high school students at William Cullen Bryant High School in Long Island City, Queens, on Monday March 2.

While the city has made efforts for Student Voter Registration Day in the past and launched Civics Week to help correct some troubling trends both here and nationally, the new state law allowing voter pre-registration of those who will soon be voting age added a new element to the larger project.

In a press release from May 2019, the City announced that during last Civics Week, 18,233 students were registered to vote. According to a March announcement from the mayor’s office launching this year’s Civics Week, “in just the past two years, DemocracyNYC, the Mayor’s Public Engagement Unit and the Department of Education registered nearly 30,000 students.”

This year’s Civics Week included a mass effort to register potential student-voters in high schools and colleges across the city. High schools are now a larger focus of the effort given the pre-registration law passed by the State Legislature and signed by Governor Andrew Cuomo last year. For those eligible to vote this year, their registration comes just in time to participate in the 2020 presidential election, not to mention other federal and state-level elections coming up in April and June primaries and the November general election. There’s also an election for Queens Borough President, where a special election was just cancelled, but a primary is set for June, with the general in November to select a replacement for the final year of what was now-District Attorney Melinda Katz’s term.

“Ahead of such a busy election year, we are proud to be empowering thousands of youth that will be 18 on Election Day. We are also excited to take the pre-registration law that went into effect this year and execute it on the ground,” said Acker.

“Our students are the future leaders of our City, and what we do now to empower them to vote will strengthen our democracy for years to come,” de Blasio said in a statement. “I encourage all students to register and show up at the polls on Election Day because their voice matters.”

According to the Civics Week announcement from the city, events throughout the week included “youth voter registration drives, participatory budgeting for their schools, public speaking competitions, and town halls on issues that matter to them and their communities.”

The New York City Department of Education also provided schools with curriculum resources for students grades K-12 to help them learn about civics and how to participate in a democracy.

The curriculum seeks to celebrate youth voice, encourage civic empowerment, and highlight the importance of registering to vote, according to the DOE. The DOE did not provide more detailed information on the curriculum when asked by Gotham Gazette.

“Understanding the importance of registering to vote starts so much earlier than 16, 17, 18,” said Brooke Wallace, New York program director at Generation Citizen, a nonprofit that runs “action civics” programming in schools in six states including New York. “It starts in middle school and even earlier to understand the importance and to understand all the powers of their voice and input at a young age, and how they can make a difference in their community civically.”

The curriculum seeks to put democracy into different contexts, allowing for students with different experiences to understand how they can use their voice in their own communities.

“At the Mayor’s Office of Immigrant Affairs, we prioritize community empowerment because we know how critical education about your rights and exercising your voice through civic participation is to realizing a more inclusive, equitable, and just world for all of us,” said Bitta Mostofi, Commissioner of the Mayor’s Office of Immigrant Affairs, in a statement. “Through this Civics Week initiative, we are helping to prepare young New Yorkers from diverse families to fully participate in decisions that will impact their lives and their communities.”

According to the state bill that made 16- and 17-year-old pre-registration law, the lead sponsors of which were State Senator David Carlucci and Assemblymember Charles Lavine, “The age 16 is a sensible time for the DMV and high schools to collect information for voter pre-registration, as it is the time when a significant amount of people have their first interaction with the DMV, and it is an age where school is still compulsory in New York. Pre-registration allows this information to be collected at a convenient time for the individual rather than making them return to the boards of elections or a state agency when they reach eligible voting age.”

Wallace of Generation Citizen had the opportunity to sit in on a couple of the classroom sessions where teachers were implementing the civics curriculum provided by the city and was hopeful about what she saw.

“I saw that teachers were able to really customize and tailor the curriculum for their classroom, which I thought was really powerful and impactful. I thought that it was really well done the way that the DOE and DemocracyNYC provided a lesson as a guide for teachers, but then teachers were able to say, ‘Oh, I know my students are interested in X, Y, and Z,’ or ‘I need to do more framing and really make the lesson impactful and exciting,’” Wallace said.

According to Aker, the voter registration drive for Civics Week and representatives from DemocracyNYC and the Mayor’s Public Engagement Unit were in over 1,000 classrooms across all five boroughs throughout the week.

Officials are still going through forms that were submitted during voter registration to do quality control, so final numbers on students registered are not available yet, according to Luis Feliz Leon, communications director for DemocracyNYC.