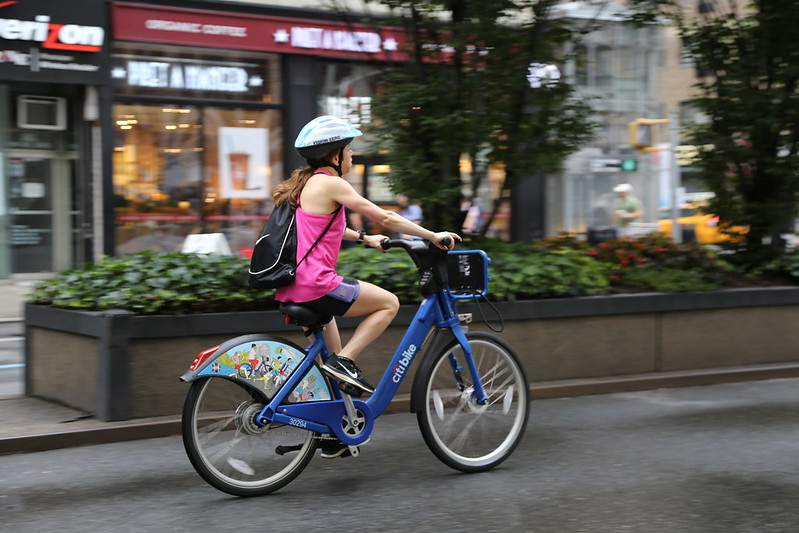 New York City has seen a spike in cycling since the beginning of the confirmed coronavirus outbreak here. With most New Yorkers staying off the subway to avoid the spread of the virus, some have sought new ways of getting around, whether to their jobs (before and, for fewer commuters, since the near-shutdown order from the governor) or to make essential trips for groceries or exercise. And there are, of course, those who use bikes for their work, with food delivery expected to spike given restaurants are indefinitely closed to dine-in business.

The New York City Department of Transportation tweeted on March 11, saying, “We’ve seen a surge in cycling since the beginning of March, with warmer temperatures and after recommendations from @NYCMayor and @nycHealthy regarding COVID-19. This week we’ve seen a 50+% increase in cycling on all East River Bridges (vs. 2019).”

With an increase in demand, there were been quick and loud calls for the city to improve residents’ access to cycling infrastructure, and the protections that come with it. Jon Orcutt, the director of communications at Bike New York, believes the city should implement a “system of pop up bike lanes or even streets for bike priority and extend the bike network” to help accommodate and encourage demand.

The city has begun some measures to expand access and safety for New Yorkers.

“To ensure cycling in the city is safer and easier, the City will install temporary protected bike lanes along 2nd Avenue from 42nd to 34th street in Manhattan, and on Smith Street in Brooklyn, from Atlantic Avenue to Fulton Street, connecting to existing lanes on Jay Street. These temporary protected bike lanes will plug two key gaps on two of the busiest bike corridors in the city,” a March 20 announcement from the mayor’s office says.

As restrictions on time in public and socializing have grown, there have been calls, including from advocates, Governor Andrew Cuomo, and City Council Speaker Corey Johnson, for the city to close some streets to cars, opening them up for pedestrians and bike-riders. On Tuesday de Blasio said he will initially be closing two streets per borough to cars, starting Thursday, but said specifics were not yet available. Bike repair shops have been deemed “essential” businesses.

“I think we all have to be understanding that city agencies are affected like the rest of us in terms of working from home, disconnected from computer networks, having kids and mothers to care for,” said Orcutt. “So the city is going to do pop-up bike lanes this week on 2nd Avenue at the Midtown Tunnel and the street leading to the Brooklyn Bridge. And so what we're hoping is that it goes well and the city can see doing more. If we're going to put cones and barrels on streets, there's got to be some degree of monitoring and management of that. And I think that's what they're trying to figure out -- what is their capacity to do that while keeping their staff safe.”

On Monday Cuomo called for New York City to present him with a plan within 24 hours for how the city would better enforce and encourage social distancing requirements, breaking up any congregations that Cuomo said have been prevalent in city parks, especially.

“There are many options,” Cuomo said. “You have much less traffic in New York City because non-essential workers aren't going to work. Get creative. Open streets to reduce the density. You want to go for a walk? God bless you. You want to go for a run? God bless you. But let's open streets, let's open space - that's where people should be, in open spaces areas, not in dense locations.”

De Blasio then said on Tuesday that he’s in the process of choosing the two streets in each borough to initially close to cars, and said the governor was on board with that part of the plan, while the mayor had indicated previously and reiterated that the NYPD would increase social distancing enforcement in parks and around the city.

Asked at his Tuesday coronavirus briefing why he was closing so few streets, de Blasio said, in part, “Enforcement, enforcement, enforcement – if you open up a bunch of streets and you cannot enforce because you're spreading out our resources too much into places we haven't normally had to enforce, you're going to have a problem of gatherings starting to happen and people not observing social distancing because there's no enforcement mechanism. So, what I – right now, we have a huge system of parks and playgrounds people are used to going to and we know where they are and we know how to enforce them and that's what we're doing. But we're going to work to set up a select number of other locations, but with enforcement attached.”

If the city can enforce what it does do now on this front, the mayor continued, then an expansion of the approach is possible. “If you cannot get regular presence from city agencies that are being stretched all over the place right now,” de Blasio said, “if you cannot get regular eyes on and regular enforcement, you run the risk of exacerbating social distancing rather than reducing social distancing.”

Transportation Alternatives, a nonprofit advocacy group, and Bike New York released a statement Monday calling for a sweeping approach by the city to convert streets to improve cycling and pedestrian access while improving social distancing opportunities. They suggest opening certain streets “exclusively to pedestrians, cyclists and emergency and essential vehicles,” including zones around hospitals, the New York City marathon route, streets routinely closed for Summer Streets, city fair routes, and streets with robust block associations. In each of these circumstances, the city has a history of closing the streets, they noted, increasing the feasibility of doing so now.

The advocates also offered a dozen recommended other streets that they say make sense to close to cars, including Shore Boulevard within Astoria Park, Crotona Avenue and Claremont Avenue within Crotona Park, the Jackie Robinson Parkway, and East Fordham Road between the New York Botanical Garden and the Bronx Zoo.

“There is a wealth of street space in the five boroughs that could be converted into social distancing-friendly places for people,” the statement reads. “Should the City require more hands to turn these proposals into a reality, Transportation Alternatives, Bike New York and our partners stand ready to enlist a corps of volunteers to help construct and maintain these car-free corridors. New York City bicyclists stepped up in the aftermath of Superstorm Sandy, and we know they will rise to the occasion again.”

On Tuesday de Blasio also announced that Citi Bike, which is owned by Lyft, is offering a month’s free membership to “essential” workers, a category that includes many city government workers, as well as health care personnel and others. Citi Bike offers over 13,000 bikes at 850 stations across four boroughs, according to its website (there are no Citi Bikes on Staten Island and the service is limited in its reach into the Bronx, Queens, and Brooklyn).

Citi Bike’s website currently has coronavirus-related reminders to “Please take care of yourself, wash your hands before and after riding, and only travel for essential purposes.” The company has also said it is “increasing our cleaning protocols.”

“We recognize that Citi Bike may be a preferred transportation option for many in our community during this time,” a Citi Bike representative said in a statement to Gotham Gazette. “We’re making sure riders have access to official Centers for Disease Control (CDC) guidance on how to keep themselves healthy, and we are implementing increased sanitation measures. We’re also actively working with NYCDOT to increase capacity in the network to provide more access. We’ll continue to monitor the situation closely, and are ready to take action based on guidance from the CDC.”

Before the virus emerged here, New York City was in the process of implementing different biking-related plans, including pieces of the mayor’s larger Vision Zero street safety plan and the Green Wave plan to increase cycling opportunities and safety.

Amid the coronavirus crisis the city announced a few changes to continue to push the Green Wave plan forward, including signal progressions, which allow cyclists to hit fewer red lights as they travel, on 43rd Avenue in Queens, Clinton Street in Brooklyn, and Prince Street in Manhattan.

The safety of bike-riders continues to be a major concern for advocates and many officials, especially as new riders emerge. Twenty-eight people were killed while riding a bike in New York City last year, an almost 21% increase in such fatalities from 2018, according to city data from the Vision Zero portal.

As part of the current public health crisis and accompanying government orders for peope to stay home, car traffic has declined significantly in the city, making the streets increasingly bikeable, but Orcutt explains this as something of a catch-22.

“There’s two things going on,” Orcutt said. “The streets have much less traffic than usual, which is great, but also people are driving faster.”

The mayor and NYPD commissioner have said they will address the apparent issue of more speeding on the more open roads, and the DOT has pushed out a few tweets seeking to raise awareness of safety in the city.

“If you are driving, always watch out for” pedestrians and cyclists, it tweeted March 11, using symbolic emojis, especially given major cycling increases. “IF you are new to #bikenyc, remember to stay seen, safe and street legal with these tips,” it continued, along with a safety infographic for bike-riders.