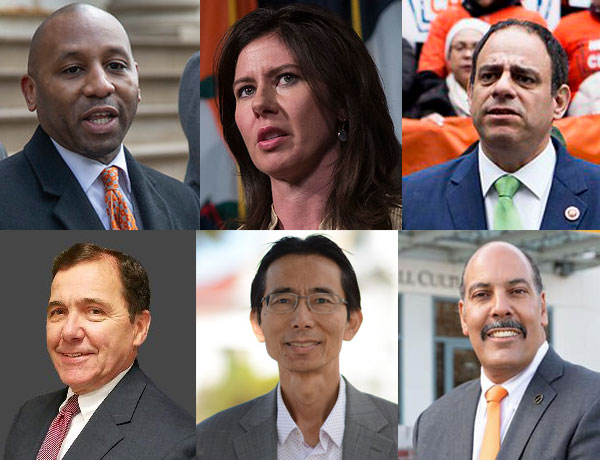 After being postponed because of the coronavirus outbreak, the Queens Borough president special election was rescheduled to take place on June 23, causing broad confusion among the candidates running for the seat and likely a logistical headache for election administrators since a separate primary for the position is also set for the same day.

The special election, which was triggered when Queens Borough President Melinda Katz was elected the borough’s district attorney, was originally scheduled for March 24, with an early voting period preceding it. But the winner of the election would only have served till the end of this year. Party primary elections would be held in June, followed by the general election in November, which would determine who serves the remainder of the term, which ends December 31, 2021.

Now, both the special election and the primary are scheduled for the same June date, coinciding with New York’s primary election for congressional and state legislative seats, according to an executive order signed by Governor Andrew Cuomo. The governor also moved the state’s presidential primary from April 28 to June 23. The June election will also have the required early voting period (June 13 through June 21).

Special elections are nonpartisan, which means any registered voter can cast a ballot, and candidates do not run on established party lines but must create their own. Primary elections, on the other hand, are “closed” and only allow voters registered with the relevant political party to cast a vote.

But officials have now scheduled for the same day the special election to see who will be Queens Borough President for the rest of the year and the primaries to determine nominees for the November general election that will determine the officeholder for 2021. According to New York City Board of Elections general counsel Steven Richman, this means that voters will receive different ballots depending on their party affiliation, with some eligible to vote in both the special election and the Democratic primary, and some only eligible for the special election. It is unclear if there will be any other party primaries for the seat.

There are six candidates on the special election ballot for Queens Borough President, while the primary ballot has yet to be set. The candidates include City Council Members Donovan Richards and Costa Constantinides; former City Council Member Elizabeth Crowley; retired NYPD Sergeant and police reform advocate Anthony Miranda; former Queens Assistant District Attorney Jim Quinn; and Dao Yin, a community activist. They are all registered Democrats. [Read about their visions for Queens and the role of borough president.]

It’s an unprecedented situation, and the candidates themselves have received little clarity from election authorities. At the same time, the candidates also worry that by June, the coronavirus pandemic will have yet to subside and that voters need easier ways to vote while still staying safe from exposure.

“There’s some ambiguity still,” said Crowley, in a brief phone interview. “I'm confident in my electability as both a candidate in the special and the primary, but I want to know about the rules of fundraising and how you keep two elections separate.”

Crowley said she wants the New York City Board of Elections to make it easier for people to vote, particularly if they’re continuing to mostly shelter at home in June. “I would like to see the Board of Elections give every voter an absentee ballot. They already pay money to send voters information about where they should vote and where their early voting sites are. With that, they should also send them the ballot in case they're not able to go, they can vote by mail.”

In a statement on Tuesday, Constantinides said that votes cast in early voting, which had briefly begun in mid-March before the election was cancelled, should still be counted. He also called on the BOE to automatically mail absentee ballots to every registered Queens voter, rather than have people apply for them as is currently required by law.

Currently, state election law only allows absentee ballots by mail for specific circumstances, and none of them account for the situation currently facing the state. State legislators have proposed expanding the criteria, but their proposals have yet to advance in the Legislature.

Constantinides also called for a new cycle of public matching funds administered by the New York City Campaign Finance Board. The CFB administers the city’s campaign finance programs and candidates are required to file separate spending and fundraising disclosures for each election. It’s unclear how the CFB will be able to monitor campaigns for separate elections held the same day.

In a letter to city and state leaders last week, CFB executive director Amy Loprest recommended that the special election be scheduled for June 23, but with the winner serving the remainder of the term through December 2021. She insisted that the administration of two elections set for the same day would be a nightmare and would also confuse voters. “The recordkeeping that will be required of candidates, and the subsequent CFB audit of expenditures, will be borderline unmanageable,” she said.

Miranda echoed those concerns. “They're going to have to relax the absentee ballot process and ensure that everybody is getting an absentee ballot at home,” he said. He also criticized the “lack of clarity” from election officials about the rules governing two simultaneous elections. “You cut down the ability for candidates to communicate with the constituents, and you have no clarity in the message of health or the rules and regulations that govern this particular campaign,” he said.

“The health of voters and poll workers remains our primary concern, and moving the election is a way that will help us accomplish that,” said Council Member Richards, in a statement to Gotham Gazette. “But we also need to educate voters on the process for this election, which requires guidance from the Board of Elections and the Campaign Finance Board. Elections are a crucial component of our democracy, and we must ensure that they are conducted properly.”

Quinn praised the governor’s decision to reschedule the election. “This is an incredibly trying time for our nation, our city, and in particular, our home borough of Queens, which continues to be a hot spot in the Coronavirus outbreak,” he said. “More than 10,000 of our friends, family and neighbors have contracted COVID-19 and more than 200 Queens residents have lost their lives. Our thoughts and prayers are with everyone affected by this virus. As we navigate this ‘new normal,’ we will continue to make the health and safety of New Yorkers our top priority and do our part to stop the spread. I have no doubt that we will emerge from this stronger than ever and more united in support of a strong, safe and healthy New York.”