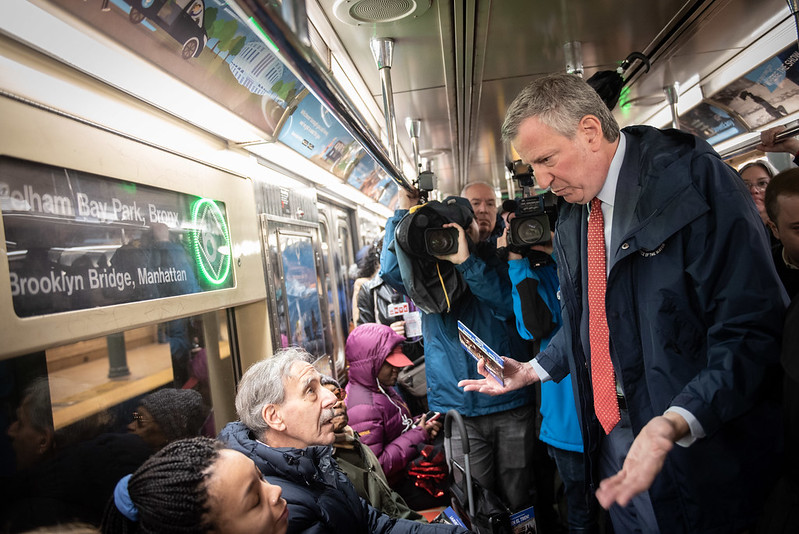 Two months after Mayor Bill de Blasio made his nominations for two empty seats on the Metropolitan Transportation Authority (MTA) Board, Governor Andrew Cuomo has yet to send those nominations to the State Senate for its approval. The inaction continues to leave half of de Blasio’s four seats empty as the Board makes major decisions impacting virtually everyone who lives or works in New York City.

The MTA Board is composed of 17 voting members, whose decisions have broad impacts on the millions of New Yorkers who rely on the metro region’s subway and bus systems, commuter railways, and tolled bridges and tunnels under the MTA’s authority. They vote on fare prices, the agency’s massive capital construction budget, and general operational policies.

The governor nominates six of those board members and names the Board chair and CEO of the MTA, and maintains effective overall control over the authority. The mayor of New York City nominates four, while one each is selected by the county executives from Nassau, Suffolk, Westchester, Dutchess, Orange, Rockland, and Putnam counties. The last four counties get one collective vote.

Since December, however, de Blasio has had only two representatives on the board, after the resignation of Veronica Vanterpool that month and with Carl Weisbrod stepping down earlier in March. After Weisbrod’s departure from the board, the mayor nominated Dan Zarilli, his chief climate advisor, to replace him. But Zarilli’s nomination was, according to Governor Cuomo, not sent in time to be vetted and therefore could not be advanced to the Senate for a vote before the Legislature ended its work for the year in June 2019.

In February, after facing criticism from transit advocates and good government groups for dragging his heels, the mayor finally made two new nominations. Zarilli was apparently out of consideration and instead the mayor put forward Lorraine Cortés-Vázquez, commissioner for the city’s Department for the Aging. To replace Vanterpool, he nominated Victor Calise, commissioner of the Mayor's Office for People with Disabilities.

The nominations are sent for evaluation including background checks to the governor, who then must send them to the Senate for a vote. “We have not received the nominations yet,” said Mike Murphy, a spokesperson for the Senate Majority Democrats, who are led by Senator Andrea Stewart-Cousins, in an email.

Olivia Lapeyrolerie, a spokesperson for de Blasio, said the administration has had no word on the nominations from the governor’s office. “These are incredibly important positions, and we conducted a thorough search to find the best possible candidates. We urge the State to take up these nominations as soon as possible,” she said in an email.

The governor’s office did not provide an explanation for why the nominations have not been sent to the Senate. Cuomo and lawmakers recently agreed upon a new state budget and members of the Legislature left Albany indefinitely.

Meanwhile, the MTA has continued to conduct essential and far-reaching business in its recent Board meetings, with de Blasio’s sway diminished. Those decisions now take a new turn amid the coronavirus crisis that has devastated MTA finances.

The delays in appointments have frustrated transit advocates, who already criticize the Board, and its structure, for serving as a rubber-stamp for the governor, who has often prioritized flashy, attention-grabbing projects over the maintenance and upgrade work that better serves the many systems under the MTA’s authority. At the same time, throughout his tenure the mayor has taken a backseat to influencing the MTA’s actions despite being critical of its efforts to claw more funding out of the city’s coffers. Case in point, de Blasio failed to make his appointment to the Capital Program Review Board, which would have had veto power over the MTA’s hastily approved $51 billion five-year capital plan.

The plan was approved unanimously in September 2019 when the mayor had three representatives on the Board. In December, when the Board approved the agency’s $17 billion operating budget for 2020, all three city members voted against it. Vanterpool officially stepped down two days after that vote.

The newly-passed state budget again makes a hefty requirement of New York City to fund the MTA, this time $3 billion for the new capital plan and up to $212 million for Access-a-Ride.

The MTA is also facing an unprecedented crisis as the coronavirus has led to plummeting ridership, which accounts for a substantial portion of its annual operating revenue. After the coronavirus outbreak hit, the board moved to virtual meetings in March. It is set to hold its next virtual meeting on April 22, again without the city’s seats filled.

With many of its own employees falling ill and dead to the virus, the agency has cut subway and bus service by 25%, paused a “Transformation Plan” that would have cut 2,700 jobs, and has stopped ongoing construction. According to MTA estimates, the authority is losing as much as $125 million in revenue each week. The MTA was seeking about $4 billion in emergency funds from the federal government to weather the storm (though those costs will likely rise); it ultimately received $3.8 billion from the recent $2 trillion stimulus package approved by Congress and the president.

Additional cost-saving measures will likely have to be taken, though it is unclear what the fate of more federal money might be. The Board’s April meeting agenda is not yet set.

As de Blasio’s two seats remain vacant, it is noteworthy that the Board continues to skew white, suburban, and wealthy, a stark contrast with the majority of commuters that are served by the MTA. Before coronavirus hit, more than 5.4 million people rode the subway on a typical weekday, while another 1.8 million rode the bus. An analysis last year by Reinvent Albany, a government reform group, found that 89% of MTA riders were New York City residents, compared to 36% of the Board’s voting members as of July 2019. About 55% of MTA riders were non-white, compared to 29% of the Board. MTA riders had a median household income of $58,000, while a Board member’s median household income was $292,080.

The mayor’s latest nominees represent important constituencies. Calise, who is in a wheelchair, would be the first MTA board member with a disability, and the MTA has long been critiqued and even sued in court for failing to provide accessibility across its system.

"Victor's relentless pursuit to make New York City the most accessible place in the world is exactly the type of ardent leadership we need on the MTA Board," de Blasio said in announcing his nomination. Cortés-Vázquez would likely extend her advocacy for seniors, who also struggle with the lack of accessibility. “Lorraine’s vast experience in government, the private and non-profit sectors, partnered with her clear dedication to our city, will make her a great addition to this Board,” the mayor said when nominating her.

Danny Pearlstein, policy and communications director for Riders Alliance, a commuter advocacy group, did note that the MTA Board is not as significant as people sometimes believe since day-to-day operations of the MTA are controlled mainly by senior staff who are appointed by and report to the CEO and Governor Cuomo. The governor has over time has also expanded his influence over the authority, including by appointing state budget director Robert Mujica to its board, which required a change to state law that Cuomo pushed through the Legislature.

But, as Pearlstein noted, the mayor’s appointees act as important countervailing forces representing the city’s interests and have in the past raised important questions about the way the MTA spends its money. Vanterpool and Weisbrod were considered particularly effective members. “They are in many respects an advisory board and not actually a governing board. But they have a bully pulpit, each of them,” he said.

The mayor’s current appointees on the board are David Jones, president and CEO of the Community Service Society of New York, and former New York City Office of Labor Relations Commissioner Bob Linn, who worked closely with the mayor for hist first term and beyond.

Pearlstein stressed the importance of the representation that the mayor’s two nominees would bring to the Board. “The MTA has difficulty adequately serving New Yorkers who use wheelchairs or have other disabilities and as somebody who is a leader in the disability community, [Calise’s] voice would be very important,” he said. “And I think the same is true of  Lorraine Cortés-Vázquez, for a couple of reasons. One, you know, as somebody who deals with older New Yorkers who also face many challenges in transit, somebody from the Bronx which is the poorest part of New York and also the most transit dependent part of New York, and as a woman of color who significantly would really stand out on the MTA board which is so white and so male.”