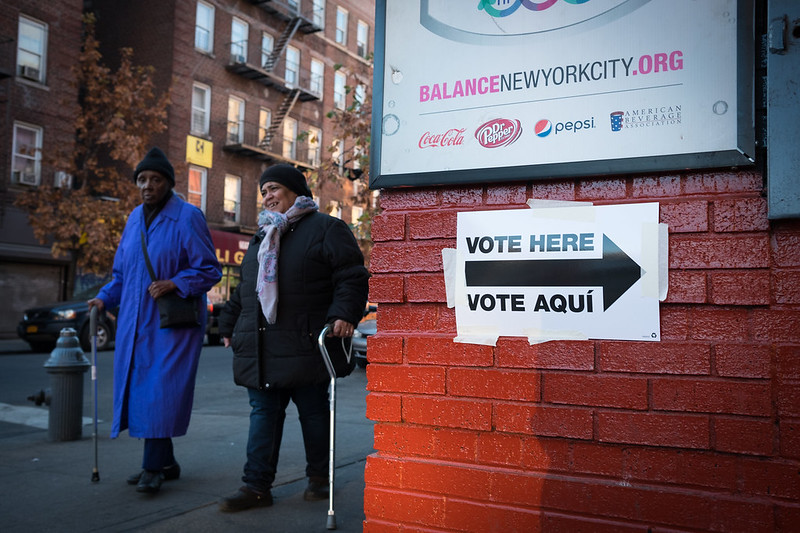 Neighborhoods with historically low voter participation are among the areas hit hardest by the novel coronavirus, according to a new analysis by the New York City Campaign Finance Board (CFB), a factor that threatens to compound the crisis' fallout in low-income communities of color.

Four of the five zip codes with the highest rates of COVID-19 infection out of those tested also had voter turnout below the citywide average in the 2019 general election, which included a small number of electoral races and a series of ballot referenda. Many of the neighborhoods overlap regions of the city with large populations of naturalized citizens and low rates of educational attainment, areas that have been disproportionately impacted by the COVID-19 outbreak, physically and economically.

In Corona, Queens, where 79 percent of people tested have had the virus, only 12 percent of registered voters went to the polls in 2019, compared with a citywide turnout rate of 17 percent, according to the CFB analysis. Queens Community District 4, which includes Corona, is 50 percent Latino, and nearly two-thirds of residents are foreign born, according to another CFB report. Seventy-one percent of the population has graduated high school, compared with 81 percent borough- and city-wide. The annual median household income in the community district is about $11,000 less than the citywide median.

In New York City and State, where voter turnout is already among the lowest in the country, groups that are historically underrepresented are now in the greatest need of aid.

Zip codes covering East Elmhurst, Elmhurst, Jackson Height, and Cambria Heights -- all in Queens -- saw the next highest rates of coronavirus infection. All but Jackson Heights had below average voter turnout in 2019 and large populations of naturalized citizens.

"Our analyses have indicated that the same neighborhoods that have historically seen lower turnout in elections, are also amongst those hit hardest by the pandemic, raising significant concerns about the impact on important upcoming elections," reads the analysis from NYC Votes, the Campaign Finance Board's voter engagement arm.

“It’s shocking, but not surprising, to see that our most disenfranchised communities—immigrant communities and communities of color, who are disproportionately on the front lines as essential workers in the COVID-19 pandemic—are the least protected from harm,” said Perry Grossman, a senior voting rights attorney with the New York Civil Liberties Union.

"We must ensure that all New Yorkers, but especially those in the most impacted neighborhoods, have clear information on how to vote safely during coronavirus," reads an email sent Monday from NYC Votes to its general mailing list.

"We're partnering with Democracy NYC and a variety of nonprofit organizations on plans to get out the vote this June and November using texting, peer-to-peer calling, and other digital and decentralized approaches to organizing," the email says, referring to the civic engagement office within the Mayor's Office. A spokesperson for the CFB said those plans are still in formation but will be announced soon.

2019 was an off-year for elections in New York and though it boasted some notable features, including the state’s first-ever early voting period and referenda to amend the New York City Charter, it had few contests drawing people to the polls. Turnout in the general election was less than half the 39 percent of the year before, according to the CFB, a historic election that saw turnout skyrocket as New Yorkers cast ballots in high-profile contests at the state and national levels.

The data accompanies (but is not part of) the CFB's 2019 Voter Analysis Report, the latest in its required annual examination of the prior year’s election cycle and, this year, including a look at the past ten-year period as the decade concluded. The findings may shine a light on the common factors in coronavirus spread and voter turnout.

While older age has long correlated with higher turnout, it now poses new challenges for eligible voters wishing to cast ballots at poll sites, where social distancing is notoriously difficult. For seniors, the group most likely to be killed by COVID-19, going to the polls has become an unviable choice of civic life and the risk of death.

New York has already postponed and cancelled some elections, and Governor Andrew Cuomo recently signed an executive order requiring all eligible voters to receive an absentee ballot application for the upcoming June party primary elections, which are mostly for congressional and state legislative seats. Voters can also request an absentee ballot online.

But without much of the infrastructure of voter engagement -- from community-based service providers to peer-to-peer interaction -- on top of the public health impacts of the coronavirus, experts fear the city's most marginalized groups will again vote at lower rates, perhaps more so, and be left with even less influence among elected officials, who are known to pay greater attention to those who put them into office.

“We must ensure these marginalized groups have better access to the ballot box—including more and more convenient early voting sites; more voter education and outreach, especially around absentee ballots; and better language assistance—so they can hold government accountable for meeting their health, safety, and other critical needs,” Grossman said.