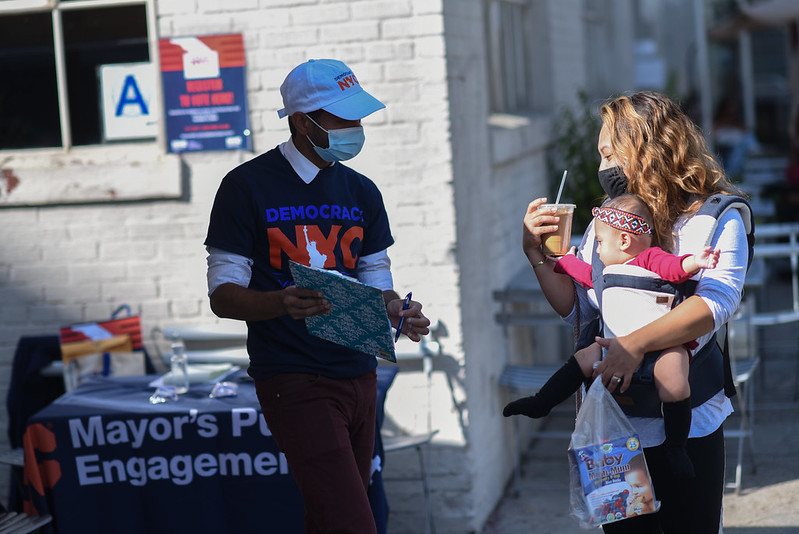 The 2020 general election is well underway, and the deadline to register to vote in it in New York is this Friday, October 9.

New Yorkers can check their registration status by using this online tool or, if they live in the city, calling the city Board of Elections at 1-866-868-3692.

The New York City Campaign Finance Board, which runs voter outreach and education through its NYC Votes initiative, has reported a sharp decline in voter registration this year as compared to 2016, likely because of the challenges posed by the coronavirus pandemic to outreach efforts — but there’s still time for that to change.

The fast-approaching deadline for voter registration also means that Election Day is less than a month away. New Yorkers can vote in the 2020 election — which includes races for President and Vice President, House of Representatives, State Legislature, and more — in several ways.

As election administrators expect a surge of overall voting, including much more absentee balloting than usual amid universal expansion of that option and potentially long lines on Election Day, officials and voting advocates have been encouraging voters to vote early if possible to avoid both the potentially dangerous crowds of Election Day and the potential confusion of absentee voting.

Sabrina Castillo, outreach director for the New York City Campaign Finance Board, suggests every New Yorker make a voting plan. “Making a plan for voting is always a good idea,” she said in an interview, “because studies show that people who make a plan are more likely to actually cast a ballot than those who don’t.” Castillo also recommends making alternative voting plans, especially considering the pandemic. “Your early voting poll site might not be the same as your day-of,” Castillo added, “so that’s why it’s important to plan.”

While this Friday is the voter registration deadline, other deadlines are also on the horizon.

October 27 is the last day to apply online, email, postmark, or fax an absentee ballot application. Even if a voter cast a ballot by mail in the June primary, voters concerned about catching or spreading COVID-19 must again apply for absentee ballots for the general, citing “temporary illness” as their reason on the application. The New York State Board of Elections offers more information on requesting an absentee ballot.

The absentee ballot itself must be postmarked by Election Day and received by the Board of Elections by November 10 in order to count.

Voters concerned that their ballot may not arrive in time to be counted or disqualified for other reasons that have at times undermined absentee balloting may choose to vote in-person, even if they already sent a ballot by mail — the Board of Elections will make sure nobody’s vote counts twice, and an in-person vote always supersedes a mailed vote. Voters can also bring absentee ballots to a poll site or the Board of Elections by Election Day. “There should be drop boxes there,” Castillo said, so that “you’re not actually going in.”