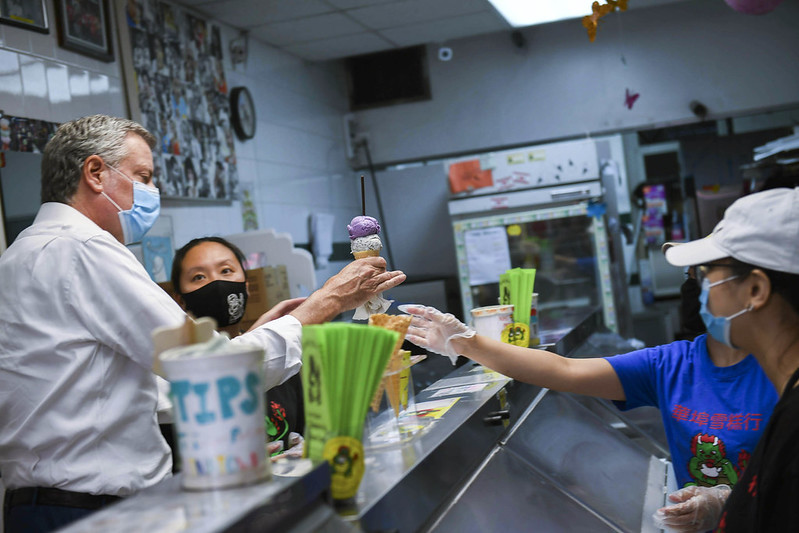 An advisory council created by Mayor Bill de Blasio to speak on behalf of the city’s small businesses hasn’t convened in months and some of its members say their concerns aren’t being heard as the city charts a stunted recovery from the coronavirus pandemic.

In April, de Blasio announced the creation of several task forces to help lead the city’s recovery efforts, including advisory councils dedicated to specific sectors such as large and small businesses, health care, education, labor, arts, culture and tourism, among others. Several statements from appointees and news reports have since pointed out that the mayor has largely ignored the voices of people on those councils.

That same month, Gregg Bishop, who de Blasio promoted to senior advisor for small business recovery in May, left the administration for the private sector. Bishop had previously served as commissioner of the Department of Small Business Services (SBS) and was replaced by Commissioner Jonnel Doris at that time. But since his departure, the mayor has not named another senior advisor in that role. Dorris has appeared with the mayor at several press briefings to discuss issues related to small businesses.

The mayor has signed into law a small business relief package passed by the City Council in May. And SBS awarded $60 million in loans and grants to small businesses across the city. But the administration has, more recently, seemed to fall behind in responding to small business concerns.

Members of the small business council say that with the lack of a point person at City Hall to listen to their recommendations and without a steady flow of information, small businesses have been left in the lurch worrying about how to navigate the financial stresses of the pandemic as well as business regulations that seem to constantly change with little notice. They were particularly concerned that the administration hasn’t clearly communicated how businesses should handle the renewed shutdowns in certain neighborhoods that have seen a recent spike in covid cases, made all the more fraught by mixed messaging by the mayor and Governor Andrew Cuomo.

“After Phase II happened, the meetings stopped,” said Lisa Sorin, president of the Bronx Chamber of Commerce, referring to the phase of the city’s reopening launched June 22, which saw the resumption of in-store retail, reopenings of salons and barber shops, and bars and restaurants for outdoor seating. “Since then we have not met as a committee,” Sorin said.

Sorin and the four other presidents of the Chambers of Commerce representing the other boroughs were among the signatories of a letter sent last month from 160-odd business leaders to Mayor de Blasio calling on him to ensure that the city’s recovery is not hampered by a lack of essential services and issues affecting public safety and quality of life. “We're the ones on the ground. We want to bring employees back,” Sorin added. “We want to help small businesses. Bring us to the table. We’re the experts.”

“We're in unprecedented times. It's a constant movement, and nobody really knows which direction to go, which is why we're asking to be for these committees to kick up again,” Sorin said.

Linda Baran, president of the Staten Island Chamber of Commerce, said that she has constantly reached out to the mayor’s office and SBS over the last few months. “However, when I reach out there’s not always clarity. So sometimes they don't have the answers, which is frustrating. It's frustrating for me, and it's frustrating for many of those small business owners that we work with,” she said.

Though she said the advisory council’s initial recommendations, mostly related to outdoor dining, were taken into account, the administration has not implemented inter-agency coordination that can help businesses avoid having to deal with multiple agencies and confusing regulations.

“I do believe that everything that's been done is more reactive than proactive,” she said, “and I feel that we really do need to be proactive because the businesses in the city, not only just here on Staten Island but throughout the city, are still very fragile.” Baran noted that the city should be better prepared for the upcoming winter season, particularly as outdoor dining has been extended throughout the year but regulations around outside heating, for instance, haven’t been publicly issued.

The New York City Business Improvement District Association recently called on the mayor to create a plan to allow an “Open Stores” outdoor retail program to boost many small, non-restaurant businesses, particularly ahead of the busy winter holiday season.

In a phone interview, former Commissioner Bishop was surprised to hear that the business council hasn’t met in months. “Oh wow! Really?” he said.

Bishop said the lack of coordination stems somewhat from the structure of City Hall, and has been exacerbated by the infighting between de Blasio and Cuomo. “You have the Economic development agency reporting to one deputy mayor and Small Business Services reporting to another deputy mayor and that in itself just led to challenges in terms of coordination,” he said. “I think that what the business community needs is clarity and unfortunately, this pandemic doesn't afford anyone clarity.”

He said naming a point person was an important step that the administration should take. “It is important for government to listen and have mechanisms where the community feels that not only can they speak to the decision makers, but that their concerns are being heard,” he said. “And I know for sure, whether you're a large business or small business, certainty is the absolute critical thing right now.”

The mayor’s office did not respond to a request for comment for this story. A spokesperson for the Department of Small Business Services said City Hall would comment, but did not follow up.

Jo-Ann Yoo, executive director of the Asian American Federation, expressed a deep frustration with City Hall as it seems to be ignoring the needs of businesses in already under-resourced communities of color that have borne a disproportionate brunt of the pandemic -- something the mayor regularly mentions during his near-daily briefings.

In a Zoom interview, Yoo said that the fact that the small business advisory council hasn’t met in months is a moot point for her since she was on the verge of resigning from it in June. “When we were asked to serve on these committees, I said yes with all the expectations and the hopes that the things that we're talking about would be implemented,” she said. Though she did praise SBS Commissioner Doris for stepping in at a difficult time for the agency, she had few kind words for the de Blasio administration. “I think it would be an understatement to say I'm disappointed. I'm actually very frustrated and very, very angry.”

Yoo’s chief concern during all the council’s meetings was language access for the pan-Asian business community. The city was issuing new regulations and announcing new programs but she said they weren’t promptly being offered in as many languages as needed. “I sounded like a broken record,” she said. “If there was ever a time that we needed to get the information dissemination right, it was during a global pandemic.” In some cases, she said, foreign consulates were sending out the latest information about city regulations to Asian-American businesses. “This is a disgrace. And yet my call for language access went unheard,” she said.

She noted that Asian-American businesses have also been suffering for longer, having experienced lower foot traffic and plummeting sales from the early days of the pandemic, well before the city shut down. “In January, our community was devastated economically,” she said.

After repeated calls and meetings with the Department of Small Business Services, Yoo said her concerns continued to go unanswered. “At some point, SBS just ghosted us,” she said.

She added, “My pushback on SBS is, look at who are the economic contributors. Look who is suffering. But how come they're not seen and they're not recognized in any of the recovery plans? That's the question I want to ask.”

The business council was as varied as the small businesses across the city. Another member, Mohamed Attia, director of the Street Vendor Project at the Urban Justice Center, similarly said he was excited to be included on the council to represent the interests of street vendors. But his excitement later turned to disappointment as well. “Honestly, we haven't seen much response from the administration in terms of street vending issues,” he said.

Attia did say that being on the council helped him air concerns from street vendors about being dislocated by a potential outdoor dining program, and that the plan eventually did not disrupt their business. But besides that one positive note, other issues haven’t been addressed. He said the administration should be offering small business grants and loans to street vendors, many of whom had to go months without a source of livelihood as city streets emptied and people sheltered at home.

One step the city could easily take, he said, is supporting a City Council bill to lift the cap on street vending permits in the city, which is currently 5,100 and hasn’t been lifted in decades. “In a matter of a couple of weeks, the city was able to issue 10,000 permits for outdoor dining for restaurants. So you see how that doesn't make sense at all,” Attia said.

Attia pointed to a chief example of how the administration’s lack of communication has been harmful. In June, the mayor announced that the NYPD would be removed from the role of enforcement against street vendors. But in September, as reported by THE CITY, police officers in Downtown Manhattan were handing out $500 tickets to vendors for minor violations. The mayor had promised an enforcement transition plan but has yet to release it.