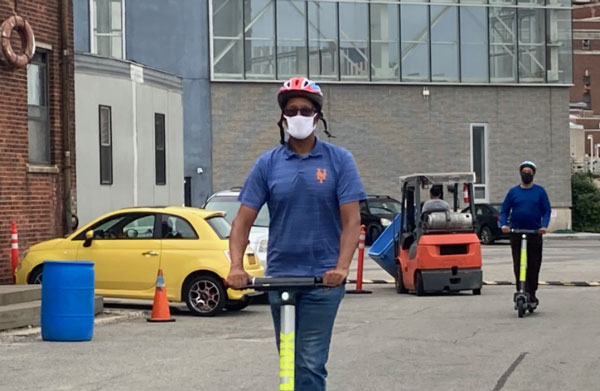 New York City is about to solicit bids for a new electric scooter sharing program that could eventually transform the city’s micro-mobility landscape. One firm that plans to seek a city contract believes it has the track record to prove itself and create a network of e-scooters that will be sustainable and accessible to communities of color that have been underserved by the city’s mass transit system.

For years, transit advocates clamored for the legalization of e-bikes and e-scooters, which was finally approved by both the state Legislature and Governor Andrew Cuomo in this year’s state budget in April. In June, the New York City Council passed legislation establishing local regulations as well as mandating an e-scooter sharing pilot program for at least one year and two years at most. Under the legislation, the Department of Transportation is required to issue a Request for Proposals (RFP) on October 15, with the aim of launching the program by March 1, 2021.

The e-scooter program is meant to offer a new option for getting around, especially in environmentally-friendly fashion, and to fill the gaps in transit alternatives, particularly in neighborhoods that currently aren’t served by Citi Bike’s bicycle-share system.

“Now more than ever New York City needs transportation options, especially micro mobility which is affordable, accessible, environmentally friendly and allows safe distancing to prevent the spread of COVID-19,” said City Council Member Fernando Cabrera, a Bronx Democrat who sponsored the legislation, in a statement. Though Cabrera acknowledged that the city faces budget constraints that Department of Transportation Commissioner Polly Trottenberg has raised concerns about, he urged the administration to create a program that “is as broad as possible to compare and contrast results in different communities and develop best practices, particularly around storage of scooters.”

A DOT spokesperson acknowledged a request for comment from Gotham Gazette but did not provide one.

Transit advocates are eager to see the program get up and running, particularly as the pandemic has changed how New Yorkers live and commute across the city. Subway and bus ridership have yet to recover back to pre-pandemic levels while bike ridership has boomed. The program is also another reason for the city to reimagine its streetscapes, they say, with an eye to creating more room for micro-mobility and reducing New Yorkers’ reliance on cars.

Although late to the game of micro-mobility, New York City has the advantage of being an attractive market for companies because of its density and connectivity with mass transit, especially as e-scooter usage has increased dramatically over the last few years – according to a report from the National Association of City Transportation Officials, there were 38.5 million trips on shared e-scooters in 2018 across the country, out of 84 million shared micro-mobility trips.

Paul Steely White, a longtime transit advocate, is now the director of development and public affairs at Superpedestrian, a Boston-based firm that launched its own e-scooter service, Link. The firm, a “second mover” in the micro-mobility market, has won contracts in cities that include Seattle, Salt Lake City, and Rome, and now has its eyes set on New York, where there’s likely to be intense competition to win the city contract for a pilot e-scooter program.

In a phone interview, White said that his firm may be an “underdog” but it has an edge over some of its more prominent competitors like Bird, Lime, Lyft, and Spin, which are all expected to apply with the city. Link’s chief selling point, White said, is its own e-scooter built from scratch that does not suffer from issues that make other e-scooters unsafe and unsustainable. He said the scooter’s “secret sauce” is its patented “Vehicle Intelligence System,” which monitors safety issues, with the battery or electrical components for instance, and can fix them automatically.

“So that means that it's a safer vehicle. But it also means it's cheaper to operate the fleets,” he said. “The biggest cost that Bird and Lime and really any shared mobility operator incurs is in maintenance and spare parts and depreciation.” White previously worked for Bird. Lower operating costs also mean that Link can offer services in areas that other firms may avoid because of a lack of profitability.

Link’s scooters also have a geofencing system, which determines the parameters of where the vehicles can be operated, that is native to the scooter rather than based on smartphone apps that have to communicate through the cloud. That allows Link scooters to more quickly prevent people from traveling into restricted zones such as roads or sidewalks, he said, and allows for self-enforcement that will help alleviate the need for the city crackdown on errant scooter riders. The geofencing can kick in in less than a second, compared to almost 30 seconds for other scooter companies, according to a Link presentation provided to Gotham Gazette.

That last point would likely work in Link’s favor. In a hearing before the City Council last month, Trottenberg warned that budget cuts to her department meant it was short-staffed and may not be able to monitor the rollout of the e-scooter program. “I don’t really have the personnel to do all these programs as well as I want to,” Trottenberg said, according to a New York Daily News report.

White noted that Link also does not need to rely on quickly capturing market share but instead is focused on providing dependable services. Early adopters like Bird and Lime, he said, “were looking to the Uber and Lyft playbook of market share as the goal. But what they missed was that that might work for a pure tech company or software company, but these are transportation companies operating in the public realm. So much more important than market share is complying with the regulations and city rules.”

There are likely to be challenges for the city besides staffing. Though the DOT has installed more than 400 miles of bike lanes under de Blasio, the city’s bike infrastructure remains woefully inadequate to handle a crush of new bicycle and scooter riders. E-scooter sales have already shot through the roof, according to a Streetsblog report.

“There's never been a time when New Yorkers have been seeking new ways to get around like the time we're in right now,” said Joe Cutrufo, communications director at Transportation Alternatives, an advocacy group where White served as executive director for nearly 15 years.

Cutrufo criticized the city for not prioritizing scooters and bicycles as modes of transit during the pandemic, particularly as people continue to be wary of taking the subway. “This should have been a priority for the DOT and frankly, it's a shame that it's not,” he said, noting that last year also saw the most cyclist fatalities in 20 years. “The pandemic hit. The mayor said walk or bike to work if you can. Well, what did he do to try and make it safer for people to be able to do that? Not much.”

He said the city needs to capitalize both on the rising demand for e-scooters as well as the changing use of curbside real estate triggered by outdoor dining. But he seemed skeptical of the mayor’s commitment to it. “The truth of the matter is that if we have the infrastructure to separate cyclists and scooter riders from motor vehicles, we're setting these types of programs up for success,” said Cutrufo. “I don't know if the mayor sees things that way. He looks at the risk as something that he has no control over.”