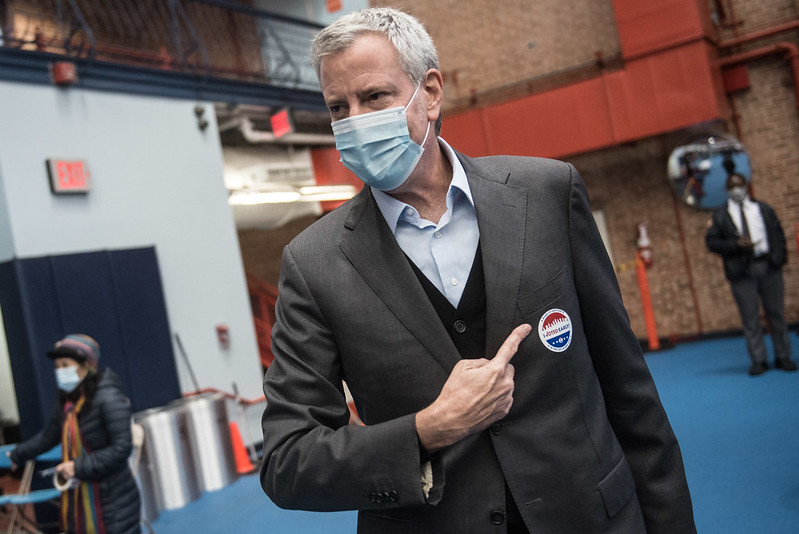 In April 2016, just after party primary elections featuring a major error by the New York City Board of Elections, Mayor Bill de Blasio announced that he would push for legislation in Albany to professionalize the day-to-day operations of the Board, among other bills that could improve the city's perennially bungled election administration and create more access to the ballot box for New Yorkers. Over four years and several poorly-run elections later, de Blasio made a similar announcement this week, declaring support for a State Senate bill that was first introduced in 2017, along with other unspecified legislative fixes to the Board of Elections’ bi-partisan and patronage-driven model.

It's unclear if de Blasio exerted any private pressure on lawmakers in the time in between April 2016 and November 2020 to move Board of Elections reform legislation, but no reforms have been made.

Since 2016, de Blasio has supported a number of election and voting reforms -- like early voting, which was enacted last year, no-excuse absentee voting (which is still on the table), and others -- and has made a number of unsuccessful attempts to force Board of Elections action through the city budget and funding-for-reform offers. The mayor doesn't run the BOE, which is the product of state law, though it is funded by the city and largely controlled by the two major political parties. But he has expended little, if any, political capital in Albany to significantly improve election administration or change the partisan structure of the Board of Elections as it is enshrined in the state constitution.

In his annual testimony before state legislators in Albany, de Blasio has voiced support for early voting and other more superficial reforms, but he has not mentioned either the State Senate bill or drastically changing the structure of the Board of Elections. In other venues, including in recent days as the BOE has mismanaged the city’s first period of early voting in a presidential election, the mayor has on occasion said he would like to see the BOE become a city agency under the power of the mayor or a quasi-independent entity like the city Campaign Finance Board.

"Reforming New York City’s outdated election systems and the BOE has been a priority for the Mayor," wrote Jose Bayona, a de Blasio spokesperson, in an email. "This Administration advocated for the raft of recent voting reforms, including nine-days of early voting and pre-registration, and automatic voter registration."

"We look forward to continuing to work with legislative partners to overhaul the BOE," he wrote.

Governor Andrew Cuomo and City Council Speaker Corey Johnson also voiced support for reforming BOE operations this past week after the first days of early voting saw long lines at poll sites throughout the city, but neither of the state’s legislative leaders, who hold the most power on the topic, offered any comment on the problems or promises of change.

Far-reaching administrative errors are commonplace at the New York City Board of Elections, one of the only government agencies where political party leaders have direct control -- of hiring, firing, and virtually all aspects of the operation. The structure enables political patronage, which leads to incompetence and poor accountability, and it has been blamed by elections experts and politicians alike for the regular problems voters experience at the polls -- from long lines and broken machines to confusing ballot design and missing language translators. The errors, like the 2016 voter purge that knocked over 100,000 Brooklynites off the rolls or this year’s mass mailing of invalid absentee ballots (also to thousands of Brooklyn voters), can be disenfranchising and dash confidence in the democratic process.

In 2016, de Blasio promised to "advance State legislation that transfers responsibility of day-to-day operations and personnel decisions from the Board of Elections commissioners to its executive management." Doing so could be done through statute and wouldn't require a state constitutional amendment -- an arduous process that requires passage in two consecutive legislative sessions and a statewide voter referendum. Voting rights advocates say such a step would be a helpful middleground while an amendment is also pursued.

"This legislation will affirm the Board’s primary responsibility to set policy and appoint executive management," reads the 2016 statement from the mayor, which came just after the voter purge and other problems with the presidential primaries that year. "The administration will also begin engaging key stakeholders to examine a broader set of reforms requiring additional State legislation."

But, it appears the mayor did little to nothing to make progress on either front, and de Blasio repeated both planks this past week, more than four years later. Gotham Gazette found no record of the mayor advocating for either reform in Albany and the mayor's office provided no evidence that he had pursued broad changes to the structure of the Board of Elections.

On Wednesday after himself waiting on line for more than three hours to vote the day before, the mayor again decried the Board of Elections and outlined a three-point plan for BOE reform. He called for the immediate passage of a bill sponsored by State Senator Liz Krueger, a Manhattan Democrat, which would delineate the roles of the board's commissioners and executive leadership, leaving the commissioners in charge of policy-setting and the management in charge of operations. The bill closely tracks de Blasio's 2016 statement and a spokesperson for the mayor told Gotham Gazette that Wednesday's outline was indeed the fruition of that promise.

"This would be a step forward," de Blasio said during his daily press briefing. "I've been advocating for this bill for years. Lots of good government groups have been fighting in Albany. This would be a first step and it could be taken immediately by the Legislature."

Krueger's bill has only one other Senate sponsor, Manhattan Democrat Brad Hoylman, and no companion legislation in the Assembly. Spokespeople for Senate Majority Leader Andrea Stewart-Cousins and Assembly Speaker Carl Heastie, both Democrats, did not return multiple requests for comment on the bill or larger BOE reform. Governor Andrew Cuomo recently said he supported "an entire redesign" of the BOE and a spokesperson told Gotham Gazette that the Executive Chamber "will review any legislation to reform it that passes the legislature."

On Friday, Cuomo called the Board of Elections “a patronage mill” that is “a disservice to the citizens,” and said the mayor and City Council should “quickly” present him with a Board of Elections reform plan. He promised to then work to make it law at the state level.

De Blasio also called Wednesday for other state legislation to remodel the board's structure within a partisan framework and, finally, one day, a state constitutional amendment to remove the partisan element completely. The mayor gave virtually no details of what the legislation should look like other than offering the city's Campaign Finance Board -- considered to be a far better run agency -- as an example.