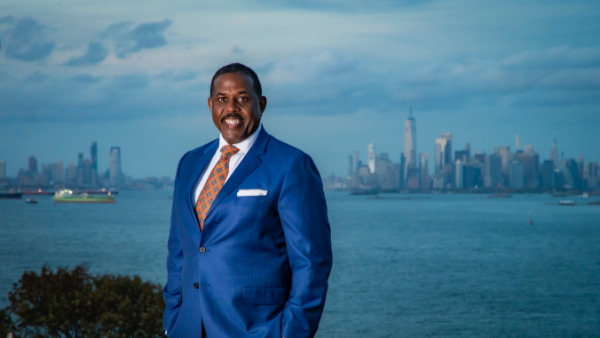 State Senator Kevin Parker, a Democrat from Brooklyn, officially announced his campaign for New York City Comptroller on Wednesday evening in an interview on NY1. He joins three other Democrats who have already jumped into the race to replace Comptroller Scott Stringer, a Democrat who is term-limited next year and is running for mayor.

In a phone interview prior to his announcement, Parker touted his long record in government, including the more than five dozen laws he has sponsored, and his background in finance as what he believes qualify him for the job of comptroller, the city’s chief fiscal officer, and make him the best candidate for the job.

Parker, who was just reelected this month to the Senate, has served in the Legislature’s upper chamber for more than 17 years, representing a Brooklyn district that covers the neighborhoods of Flatbush, Midwood, Park Slope, Kensington, Ditmas Park, and Windsor Terrace. He currently chairs the Senate’s Committee on Energy and Telecommunications and over the years has served on a range of committees including finance, banking, insurance, higher education, alcoholism and drug abuse, cultural affairs, tourism, and parks and recreation. He is currently the Senate majority whip.

Prior to being elected to the Senate, his experience includes serving as a special assistant to former State Comptroller H. Carl McCall, as project manager for the state Urban Development Corporation, and working on municipal finance in the chairman’s office of UBS PaineWebber, the global financial services firm.

Parker has on several occasions been a figure of controversy, with a history of angry outbursts and incidents that have landed him in legal or ethical trouble.

In the Democratic primary for the citywide post, Parker is competing with Brooklyn City Council Member Brad Lander, Manhattan State Senator Brian Benjamin, and Queens Assemblymember David Weprin. Other candidates could still enter the race. There are no Republicans running for comptroller at this time. The primaries will be in June 2021, and will include the city’s new ranked-choice voting system, which will apply to special elections and party primaries for city government positions starting next year.

“I think that I have a superior vision than my colleagues, and understand how we need to really, truly invest in our communities and young people,” Parker said in the interview with Gotham Gazette, “to do things like make sure our seniors are protected, make sure that we are addressing the needs of people who are homeless, and make sure that everyone in the city feels safe, while simultaneously making sure that there's an equitable distribution in economic opportunities.”

The comptroller is the city’s top fiscal officer and the office’s duties include monitoring city spending and revenue, auditing city agencies, reviewing city contracts, enforcing prevailing and living wage laws, and overseeing the city’s public pension funds that hold more than $228 billion in assets. Those who’ve held the office also typically issue a variety of reports and policy recommendations, and often weigh in on a wide range of issues that are not directly under the comptroller’s purview but relate to the health of the city.

The comptroller cannot make decisions, only recommendations, about the city budget, but offers an important voice and perspective in such matters, especially given that the office has a large staff of professionals who carry out analyses and audits.

The fact that New York City is currently in the throes of a major economic recession and government fiscal crisis because of the coronavirus pandemic makes the 2021 race for comptroller all the more important.

With billions in lost revenues, there is a massive budget deficit that Mayor Bill de Blasio’s administration has not yet resolved for the current and next fiscal years, even as the mayor continues to seek the authority from the state Legislature to borrow billions for operational spending. The next comptroller will inherit the office at a time when oversight of fiscal management has arguably never been more important. A great deal of the city’s fiscal health will be determined by what relief package may or may not come out of Washington, D.C. and decisions made at the state government level.

“You need somebody who is going to bring practical solutions to the table and these are solutions that not just help individual communities but also get our entire city back on track,” Parker said. He pledged that he would create a task force on day one to examine the impact of COVID-19 on the city and propose solutions to it. The task force would be composed of business, labor, nonprofit, community, and clergy leaders. “We need some more intricate data...and more conversation about looking at where the opportunities are to advance our economy,” he said.

“When you talk about economic opportunity, creating full-time jobs and living wage benefits is job one, and it’s job two, and I think it’s probably job three. I think if you boost jobs, then revenue will follow,” he said. “I don't think you need to do anything exotic around revenue if you're creating jobs and putting people back to work. New Yorkers don't want a handout, they want a hand up.”

On NY1, Parker cited his record on police reform, including several recently-passed laws, and said that as comptroller he would prioritize examining the NYPD budget, stressing that while he is not part of the "defund the NYPD" movement he does think New Yorkers can get more bang for the buck from police spending.

He also said he would continue to play a strong legislative role. “I expect to have a person in Albany, have a person at City Hall, working with the City Council and the state Legislature to pass legislation that is important for the fiscal health of our city, and in all types of issues that are critically important,” Parker told Gotham Gazette.

Parker seemed to dismiss any potential criticism he may face over announcing a run for another office right after being reelected to his current position. “It's been a great opportunity,” he said of serving in the Senate. “But I also see our city at a crossroads and [understand] that I have both the leadership experience, the legislative experience, and the vision to fill this gap in leadership that we're going to have because of term limits.”

What’s likely to hound Parker on the campaign trail is his history of controversy. Infamously ill-tempered, Parker has made several headlines for all the wrong reasons though he has repeatedly seemed to avoid real consequences. In 2005, he was arrested for punching a traffic agent and avoided criminal charges by agreeing to anger management classes. In 2010, he was convicted on two charges of misdemeanor criminal mischief for a 2009 incident where he attacked a news photographer and damaged his camera. In 2018, he tweeted “Kill yourself!” to Senate Republican spokesperson Candice Giove, who had called him out for parking placard abuse, before deleting the tweet and apologizing. The following year, he reportedly got into a shouting match with the newly elected State Senate Alessandra Biaggi in a closed door meeting of the Senate Democratic conference where the tweet was discussed. He wound up facing no formal consequences from the Senate majority he is part of.

“The reality is that I've been serving for 18 years, and I think I have a tremendous record of service. Everything I've done hasn't been perfect. I think that no one is perfect,” Parker said on Wednesday. “But I think I've grown professionally and I've grown personally in this job. Would  have done everything...that I've done in the past the same way, looking back? No.”

He added, “Anything that you think you don't like about me, you have to balance against the work that I've done.”

As a somewhat late entrant into the race, Parker is behind the other candidates in fundraising for his campaign. As of July 11, the last campaign finance deadline, Parker had only $3,255 in his comptroller campaign account. He also has just over $77,000 in his state campaign account that he could potentially transfer to his city account. Meanwhile, as of July, State Senator Benjamin had a campaign balance of roughly $386,000, Council Member Lander had about $351,000, and Assemblymember Weprin had about $144,000.