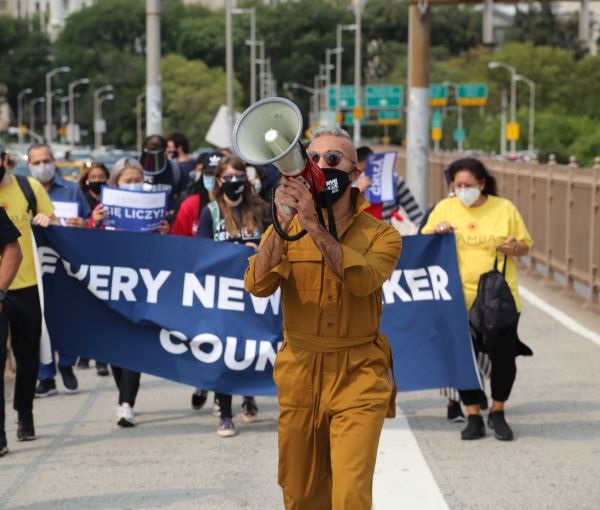 After having helped lead a successful New York City 2020 Census outreach campaign faced with daunting and unprecedented challenges, Amit Singh Bagga is turning his eye toward the City Council.

Bagga, the deputy director of the New York City Census office, announced on Saturday that he will run for City Council in District 26 in Queens, currently represented by term-limited Demoratic Council Member Jimmy Van Bramer.

As with many “open” seats in the 2021 election, District 26, which covers Sunnyside, Woodside, Long Island City, Astoria, and Dutch Kills, has attracted a crowded field of candidates, with 16 people having already jumped into the race. Like most others in the city, the race is all but certain to be decided in the Democratic primary, which will take place in June and feature ranked-choice voting, which begins in the city in 2021 for special and party primary elections.

Bagga believes his record of public service eclipses the rest of the field. “I am the only candidate in this incredibly crowded field that has a real record of understanding how to take big complicated ideas and...push and pull every single lever of government to turn them into reality to lift the floor for working people,” he said in a phone interview prior to his Saturday kickoff event, happening at Lt. Cpl. Noonan Park in Sunnyside.

In his most recent role as second-in-command of the city’s Census program, under Director Julie Menin, Bagga helped coordinate a major $40 million effort to ensure that New Yorkers were accurately counted in the decennial Census. The campaign performed well, despite being hampered by the coronavirus pandemic and several efforts made by the Trump administration to undermine the count.

“I'm running for City Council because I essentially believe that New York City once again needs to be a place of opportunity so that all New Yorkers can live with dignity, while building power together,” Bagga said.

Prior to working on the Census, Bagga served as a deputy commissioner at the Department of Social Services for one year and at the Department of Consumer and Worker Protection for three years. He was a project director in the mayor’s Office of Appointments and a field director for Mayor de Blasio’s first mayoral campaign, a role he took on after initially working for former U.S. Rep Anthony Weiner's mayoral campaign. Bagga was a congressional aide for nearly four years in Weiner’s office.

Bagga also led the city’s team that negotiated with the U.S. Department of Treasury to allow IDNYC, the city’s municipal identification, to be used for setting up bank accounts. He worked to help pass successful legislation including new freelancer and fast-food worker protections (which he also helped write, he said) that have been approved in recent years.

As the child of South Asian immigrants who separately built successful lives in New York City, Bagga said he is dismayed by the unequal growth and the declining economic stability and opportunity that the city now offers, despite the best efforts of successive administrations. “Even before COVID, I think that opportunity was falling out of reach for far too many New Yorkers,” he said. “And far too many New Yorkers, I think, have also for too long, really been suffering from the ills of systemic and structural racism, and xenophobia.”

The inequity that Bagga spoke of has never been more apparent than in the wake of the pandemic. Low-income communities in Queens, with large immigrant populations, were among the hardest hit by the virus and the existing disparities in access to health care, food, housing, and employment have only been further exacerbated. District 26 borders the dense and overcrowded neighborhood of Corona, which was the epicenter of the virus in the borough. “What we saw is that the very challenging economic conditions that people were just surviving in, ended up having a very direct impact on their ability to actually fight and live through this terrible disease,” Bagga said.

“These are communities that for very long in New York City have been shut out of the decision-making apparatus,” Bagga said. Though he did praise the de Blasio administration for lifting the floor for working New Yorkers and immigrants, he said, “It's not enough.”

If elected, Bagga would be the first queer South Asian member of the City Council. He said it’s an “absolute tragedy and a shame” that despite there being more than 300,000 South Asians in the city, no member of the community has been elected to represent the city in any office in the state until this year. That “lived experience,” he said, is invaluable and sorely lacking in government.

“People, every single day, particularly people of color, particularly queer people, live in margins constantly and are constantly having to fight these battles,” he said, “and someone who understands what fighting those battles successfully, what that really means, I think having a person like that or people like that in elected office is really critical to having a government that functions well and truly serves the needs of people.”

Among his top priorities, he said, is addressing the multiple crises affecting the many undocumented immigrants that live in the district, who cannot access public benefits and have been largely ignored during the pandemic, and the working poor, like taxi drivers and gig workers, who make just enough to not qualify for public assistance but are teetering on the edge of financial instability.

Bagga cited former Mayor Michael Bloomberg’s efforts to create funds for public health and public education as an example of the type of policy for which he would advocate. “We need to do the same for our workers, our small business owners and immigrants,” he said, proposing a fund that, with just 0.1% of the city budget or between $80-85 million, could be used to help taxi drivers deal with debt, provide legal and support services to undocumented immigrants, and help nonprofit community organizations expand their staff and services.

“We are entering a very, very challenging phase of our history here in New York City...and we need leadership that doesn't just have good ideas, and doesn't know just how to have a good press conference, but actually knows how to work with every single stakeholder to get the job done,” Bagga said. “And I have some opponents who are very smart people, who are very well-intentioned people, but none of them have that history.”

Note - this article has been updated to note that Bagga proposed a fund worth 0.1% of the city budget, not 1%.