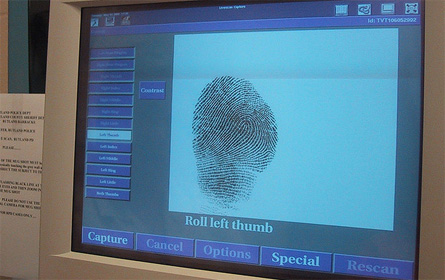 As early as this week, Gov. Andrew Cuomo could decide whether New York should withdraw from Secure Communities, a program that has local law enforcement agencies share digital fingerprints of those arrested with U.S. Immigration and Customs Enforcement or ICE.

Some members of the legislature along with immigration advocates are pressuring Cuomo to leave the program. They charge Safe Communities has resulted in unnecessary deportations and has made many immigrants reluctant to go to the police. Calls to Cuomo's office were not returned.

Regardless, though, of what Cuomo would like to do -- and he has not spoken out on this -- a question remains of what he can do. Illinois Gov. Pat Quinn recently tried to opt out of the program and was told by the Department of Homeland Security that terminating the contract was impossible -- that the information would still be collected.

Secure Communities is still being rolled out across the country and New York. According to ICE's Secure Communities website 41 percent of the country has been activated into the program and 44 percent of New York State -- including counties in Long Island, upstate and western New York. ICE is slowly activating more counties across the state. The effects are already being felt.

The plan is supposed to catch immigrants who are "hardened criminals," but ICE has admitted that 79 percent of the 102,000 immigrants deported under the program have never been convicted of any crime. Activists and legislators say the program has a dangerous and chilling effect on the relationship between immigrant communities and law enforcement.

"The fear is very real" said State Sen. Gustavo Rivera, "The program is designed to identify dangerous criminals, but 79 percent of those deported under the program have not been convicted of a crime. It makes people afraid who are victims or are witnesses of crimes. It breaks up families. It is not doing what it is supposed to do."

State Sen. Jose Serrano agrees: "Our communities are far less safe because of this program. Immigrants are forced far underground." Serrano says he hears horror stories "day in day out: victims of domestic violence who wouldn’t come forward -- they didn't want to stir the pot, get their families, or relatives in trouble, draw any attention. There have been stories about immigrants suffering under abusive landlords and employers."

From the program's inception in 2008 to May 2011, more than 7 million people have had their fingerprints reviewed by ICE. Of those, 197,000 were identified as likely illegal immigrants, with 40 percent of them in California.

The congressional Hispanic caucus is calling for President Barack Obama to place a moratorium on the program and the Homeland Security Department's Inspector General Charles Edwards plans to review it in 2012.

Gov. David Paterson signed on to the program in May 2010. Last week 38 New York legislators sent Cuomo a letter asking him to withdraw.

Legislators including Serrano met with a Cuomo staffer and were assured Cuomo shares their concerns. Now advocates and legislators have heard that the Cuomo administration will likely weigh in by the end of the week.

"I think the dialogue has been good," said Serrano of conversations with the Cuomo administration. "He [Cuomo] did inherit the situation. Gov. Paterson signed onto the program. But it is important we do all we can as a progressive state to legally opt out of the program to send the message that we respect our immigrants, that the legislation has failed, and we need comprehensive federal immigration reform."

On May 4, Illinois' Quinn sent a letter to the federal department of Homeland Security informing them that the state would no longer participate in the program -- new counties would not be activated under the program and counties already activated would stop sharing fingerprint data.

Quinn charged that the implementation of Secure Communities was did not comply with the memorandum of understanding he had signed, which said the program would only target immigrants who were convicted of serious crimes."By ICE's own measure, less than 20 percent of those who have been deported from Illinois under the program have ever been convicted of a serious crime,” Quinn wrote.

But exiting Secure Communities wasn't that easy. The Department of Homeland Security informed Illinois that participation is mandatory.

This appears to contradict emails sent to New York state officials last year by Dan Cadman, a contractor working for ICE. In one, Cadman said, "No jurisdiction will be activated if they oppose it." Those communications were credited with convincing Paterson to participate in the program.

Cadman countered that the "ambiguity" about whether a locality could opt out of the program came from officials much higher up the chain of command. He said he was instructed to mislead localities that had a large population of immigrants.

Recently Janet Napolitano, director of Homeland Security, said that the program will be mandatory for every state and every county by 2013.

Serrano said confusion still surrounds the process. "No one really seems sure about this. It would seem pretty far fetched for New York City, which is known for doing its own thing and has a history of protecting immigrant rights, to be part of this but if this is mandatory then over time it seems everyone would be sucked in," he said. "That is why it is so important we opt out now."

The Bloomberg administration did not return calls for comment. In the past Bloomberg's office has declined to comment on Secure Communities because it is a state and federal program. The administration, though, has come under fire from immigrant groups for giving the names of all people arrested to ICE, which then determines whether the individual is an immigrant who cold face deportation.

On May 18, the year anniversary of Paterson's decision to participate in Secure Communities, immigrant groups rallied in front of Cuomo's Manhattan office,urging him to opt-out. Although federal officials told Illinois it could not leave the program, the e-mails showing Paterson may have been misled has given advocates hope that Cuomo has ammunition to extricate New York from the program.

Mizue Aizeki, an organizer for Northern Manhattan Coalition for Immigrant Rights" who took part in the rally, said that she feels,"Momentum is building to stop it." She said that despite ICE's claim that participation is mandatory, Cuomo should opposed the program to bring more national attention to why it hurts communities.

Manisha Vaze, an organizer for Families for Freedom, said her group has been lobbying for New York to separate from the program since Paterson signed up. However, she says confusion over whether communities could opt out made things even more scary and uncertain for communities.

"The points are still murky, and it has created mistrust. It made the gap even wider for any contact between immigrant communities and the police." Vaze admits that it is unclear what actual impact the program has had -- how many people have been deported from New York.

"It is hard to gauge. We don't have any statistical information. It is hard to tell how communities are feeling but at the same time people are really scared," she said.

Despite the lack of hard numbers, Rivera thinks Secure Communities has done damage. "it has not done what he program is supposed to do," he said. "We know that 79 percent of individuals deported have no criminal record."

None of the five boroughs are currently enrolled in the program, but if New York remains in the program they probably would eventually be "activated." Serrano said he has tried to assure constituents that Mayor Michael Bloomberg's ecutive order 41 that allows city residents to seek help from city services without revealing their immigration status should keep them from fearing contact with the police. But he says word is getting out about Secure Communities and how many people have been deported.

In the case of giving the names of those arrested to federal authorities, the city has said Executive Order 41 does not apply.

"The mayor’s Executive Order 41 allows immigrants to gain access to city services and report crimes with no fear of being questioned about immigration status," John Feinblatt, the mayor’s criminal justice coordinator, said in a letter to the Times last month. "But when it comes to immigrants arrested for criminal activities, the executive order ensures cooperation with federal authorities."

Rivera said the time is ripe for Cuomo to act-- "right now there is a window of opportunity because we know New York signed the document to participate in the program under false pretenses."

Serrano thinks that New York's withdrawal from the program would send a huge message nationally and force the federal government to rethink its policies. "We have to let our voices be heard, we have to explain why it is bad."

Assemblywoman Grace Meng said that hopes Cuomo will opt out of the program but realizes that, with less than four weeks left in the legislative session, Cuomo has other priorities on his plate. "This is not an issue that is exclusive to session," she said. "I remain hopeful that the governor will act soon." ICE did not return calls for comment.